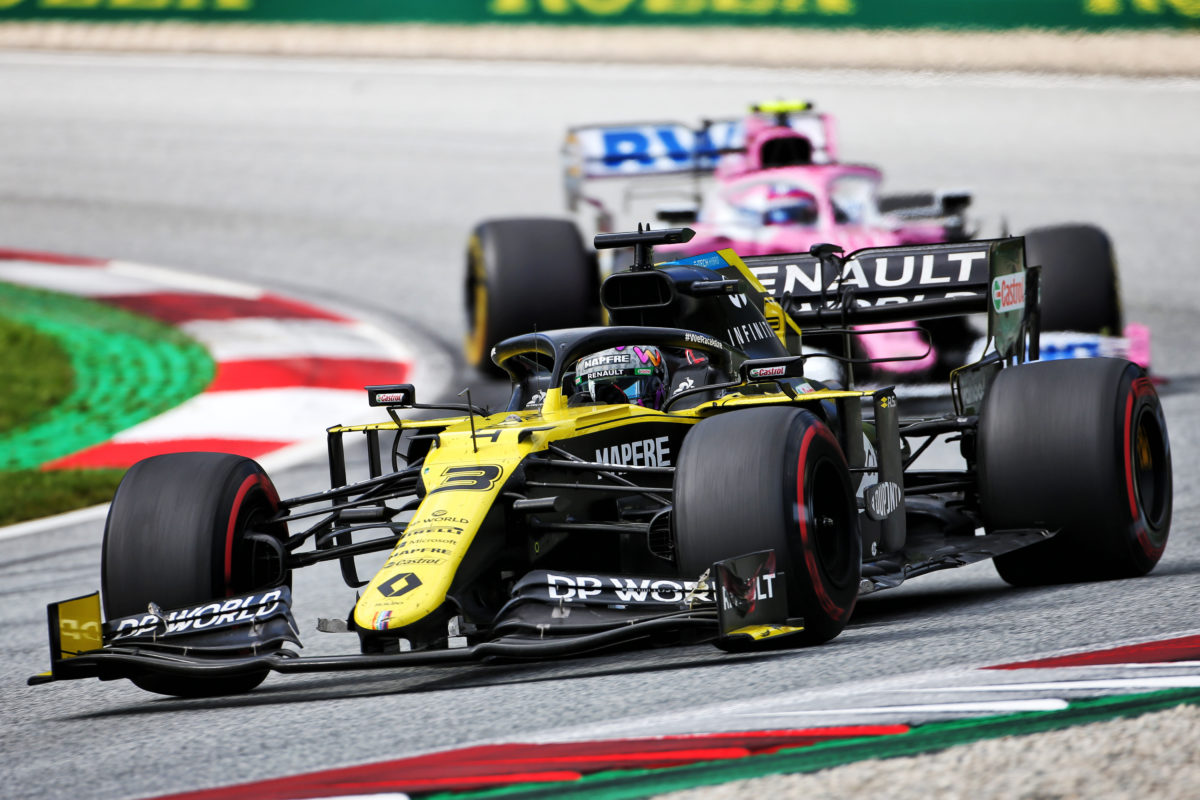 Daniel Ricciardo has been left frustrated after dropping two places in the closing stages of the Styrian Grand Prix.

The Renault F1 Team driver crossed the line eighth after becoming embroiled in a three-way scrap for sixth with Lance Stroll and Lando Norris.

Ricciardo and Stroll ran together for much of the second half of the race, the Racing Point driver unable to find a way through.

A late move at Turn 3 with two laps to go saw Stroll send a move up the inside of Ricciardo’s Renault, forcing the pair to leave the race track.

By the time he rejoined, Ricciardo had slipped to eighth behind Norris while Stroll defended against the McLaren driver on the run to Turn 4.

“I did see Stroll coming but I felt if I turned in, we would have crashed, so I had to make that call,” Ricciardo said.

“I maybe should have blocked him and it’s a shame to lose a couple of positions from that one moment.

“The overriding feeling is frustration, but we’re up and running for the season now.”

The penultimate lap incident was investigated, though Stroll was ultimately cleared of any wrongdoing.

Ahead of that investigation, Ricciardo felt the Racing Point driver should have handed the place back.

“Firstly he didn’t really get past, he forced both of us off the track,” Ricciardo told Sky Sports F1.

“I’ll always be critical of myself and I should have closed the door but I don’t think he was ever making the move so I think it was desperate.

“I think Lando was coming and I think he had to do something otherwise Lando was going to eat him up.

“I take the apex and we crash, so that is a frustrating end and we lost a position to Lando.”

Ricciardo ended the race less than a tenth of a second away from Stroll, who in turn was alongside his Racing Point team-mate Sergio Perez as the trio crossed the line.

A late attempt at Alex Albon for fourth left Perez with a damaged nose, the Mexican limping his car to the finish in the final lap and a half.

That saw him lose a position to Norris, and narrowly hang on ahead of the Stroll/Ricciardo battle as they took the chequered flag.

Esteban Ocon in the second Renault failed to make the finish after suffering apparent cooling issues during the middle phase of the grand prix.

Two eighth place finishes from the opening two races of the season leave Renault sixth in the constructors’ championship, one point clear of AlphaTauri.