Leclerc apologetic for taking out Vettel

Leclerc apologetic for taking out Vettel 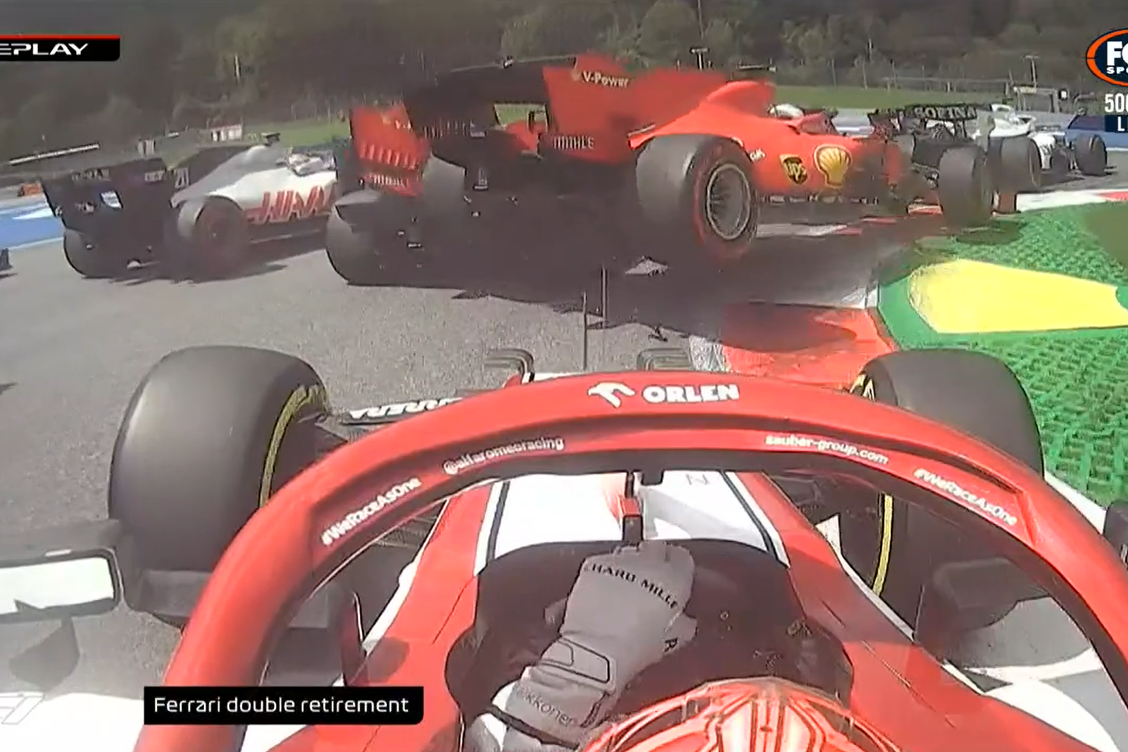 Charles Leclerc has expressed his apologies for crashing into Ferrari team-mate Sebastian Vettel on the opening lap of the Styrian Grand Prix.

Leclerc, who started 14th after a three-position grid penalty, came from deep under brakes to launch off the kerb and into the side of Car #5 at Turn 3 of the Red Bull Ring.

Vettel’s race was over as soon as he drove back to pit lane, with his rear wing barely attached, while the instigator of the calamity made a short-lived attempt to press on before it was decided that his floor damage was too great.

Asked what he said to his team-mate before fronting the media as the race played out without them, Leclerc said, “Well, I apologised.

“Obviously, excuses are not enough in times like this and I am just disappointed in myself.

“I’ve done a very bad job today, I let the team down… I can only be sorry even though I know it’s not enough, and I hope I will learn from this and will come back stronger for the next races.

“But, it’s a tough time for the team, we don’t need that, the team doesn’t need that, and I put all the thoughts of the team in the bin, so I’m very sorry but it’s not enough, again.”

When it was put too him that he had been ‘too optimistic’, the 22-year-old responded, “Yes, yes I was.”

I am disappointed in myself. I’m sorry but being sorry is not enough. Seb hasn’t got any faults today. I’ve let the team down after them working a whole week to bring the updates early. Too eager to gain those places in the first lap. I will learn from it.

Vettel’s take on the incident was that, “I don’t think there was space, so obviously that’s why, I think, we collided.”

He already had Pierre Gasly and then Romain Grosjean to his outside for the tight right-hander, and said there was nothing that he could have done to avoid the hit.

“I was fighting two other cars, we were already three cars into Turn 3, and then I was very surprised because I had the inside and I wasn’t expecting Charles to try something, so I don’t think there was any space, you know,” recounted Vettel, who started from 10th.

“So, obviously a big pity, something that we should avoid, but not much that I could have done differently.

“I was just taking it easy and conservative because it was already very busy – it’s a hairpin, it’s very tight – and just trying to place my car for the next straight, but by then I realised that I had quite some damage on the car.”

Scuderia Ferrari Team Principal Mattia Binotto did not seek to apportion blame for the clash, but admitted that it was yet another sour note on a weekend during which the red cars had been well off the pace throughout.

“Well, I don’t think there is much to say to the drivers; it’s about pain to conclude the race in such a way after only two laps.

“I think it’s the worst conclusion of a very bad weekend from us, a difficult weekend for us.

“I think it’s not time to look for responsibility or accuse; it’s time to work united, treat issues back home with all the right people, to progress as soon as possible.”

Making matters worse, the incident deprived Ferrari a chance to assess the updates which it had fast-tracked for the weekend after showing disappointing pace in the season-opener at the Red Bull Ring.

“Yeah, that is a shame,” remarked Vettel.

“Obviously, it was a bonus to come back here with the same track and also today is very similar in terms of conditions, but we will not get that answer, I’m afraid.

“The car felt a lot better on Friday and back to where it was last week up to the point where it went in the wrong direction, but it’s a shame because also for the update we would really like to get the race on the line and some laps to see where the car is but unfortunately we will not get that answer.”

Leclerc has slipped to fourth in the drivers’ championship on the 18 points he earned by finishing second in the Austrian Grand Prix while Vettel is back in 15th with one point to his name.