Lewis Hamilton has dominated a Styrian Grand Prix in which Charles Leclerc took out Ferrari team-mate Sebastian Vettel at the third corner.

Hamilton led all the way but for the pit stop cycle and Valtteri Bottas made it a Mercedes one-two by way of a late pass on Max Verstappen, who completed the podium at the Red Bull Ring in his Red Bull. 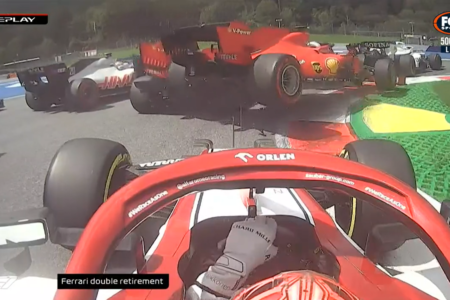 Leclerc started from 14th after a three-position grid penalty and the Scuderia’s weekend went from bad to worse when he outbraked himself at Turn 3, launching off the kerb and into the rear wing of Vettel’s car.

Both pitted at the end of the lap as the Safety Car came out, with Vettel taking no further part and Leclerc joining him in the garage soon after.

Hamilton had bettered fellow front row starter Verstappen when the lights went out and the latter did well to stave off Carlos Sainz, while Bottas took up fourth from Albon and Esteban Ocon.

Daniel Ricciardo sat behind his factory Renault team-mate having gained a spot when he unsettled Pierre Gasly (AlphaTauri) with a touch at the first corner, and was first of those on medium compound tyres as opposed to the softs.

When the field arrived at Turn 3, Vettel and Kevin Magnussen (Haas) were already side-by-side as Leclerc came from deep and clattered into his team-mate, drawing a Safety Car for debris.

Leclerc had a new nose fitted and took the restart on Lap 4 but was back into the pits for good at the end of that lap.

Hamilton was almost 1.5s up on Verstappen after the first racing lap, while Bottas rounded up Sainz for third into Turn 4 on Lap 6.

Albon passed the Spaniard in similar fashion two laps later, while Ricciardo was clearly being held up by Ocon.

The Australian was kept at bay when he tried to go around the outside of the Frenchman at Turn 4 on Lap 18 but got the move done by the time they arrived at the corner on the following lap, by which time Sainz was two seconds up the road.

Hamilton had started to turn the wick up and was over five seconds ahead of Verstappen, while Bottas had not long got within two seconds, when the Red Bull was called into pit lane on Lap 25 to change to medium tyres.

Verstappen resumed in third spot and was still there when Hamilton made the same pit stop three laps later, resuming with around five seconds between them.

Sainz suffered a slow left-rear change when he pitted on Lap 32 from around 1.7s ahead of Ricciardo, while Hamilton’s lead was restored when Bottas took service on Lap 34.

The Finn exited the pits in third position, around eight seconds behind Verstappen, before Albon temporarily dropped from fourth to seventh when he pitted on Lap 35.

Ricciardo exchanged his mediums for softs on Lap 37, and Perez did the opposite at the end of Lap 38, precipitating a stoush with Sainz on his out lap in which he reclaimed eighth spot at Turn 5 having briefly lost it to the McLaren driver.

When Norris filed into the lane for his stop on Lap 39, the front-runners were back where they started at the beginning of the pit cycle, with Hamilton leading Verstappen, Bottas, Albon, and Ricciardo.

Sergio Perez, who started 17th, wrested sixth position from Racing Point team-mate Lance Stroll on Lap 45, and needed only three laps to wipe out Ricciardo’s 1.6s advantage before breezing past the Renault on the short chute to Turn 4.

Stroll was soon attacking Ricciardo and Perez lurking behind Albon, but traffic was not favouring the Mexican.

Norris, on the other hand, was released by his McLaren team-mate Sainz to take up eighth position on Lap 61.

Meanwhile, having essentially matched Hamilton’s pace in net terms for around 20 laps, Verstappen had fallen to more than 10 seconds away from the leader on Lap 64, with front wing damage on Car #33.

Bottas caught the Dutchman on Lap 66 and looked to have taken the place at Turn 4 before Verstappen fought back through the left-handers.

The last-start winner would not be denied again on the following lap, and the focus switched to who would earn the point for the fastest lap.

Sainz and Verstappen took free stops from ninth and third respectively either side of Hamilton taking the bonus point back from Norris.

However, Sainz reset the lap record on Lap 69 and held onto the mantle in the two laps which remained thereafter.

Ahead, the Racing Points were engaged in separate battles, with Perez beginning to struggle after touching Albon’s right-rear wheel at Turn 4.

Stroll lunged at Ricciardo in a bid to take sixth at Turn 3 on Lap 70, a manoeuvre which took both beyond track limits and ultimately allowed Norris to also go by the #3 Renault.

Norris tried for two for the price of one but was rebuffed by Stroll at Turn 4, only to pull off the pass there a lap later.

The Briton then drove down the inside of the damaged Racing Point of Perez in the final corners to claim fifth, with the Mexican beating Stroll to the finish line by 0.066s.

Hamilton won by 13.719s from Bottas, Verstappen, and Albon, with Ricciardo taking the chequered flag in eighth.

Sainz finished a lap down in ninth and AlphaTauri’s Daniil Kvyat rounded out the top 10.

Ocon retired after 25 laps due to what was reportedly a suspected cooling problem, making for 17 finishers.

Bottas continues to lead the championship on the way to the Hungarian Grand Prix next weekend (July 17-19).