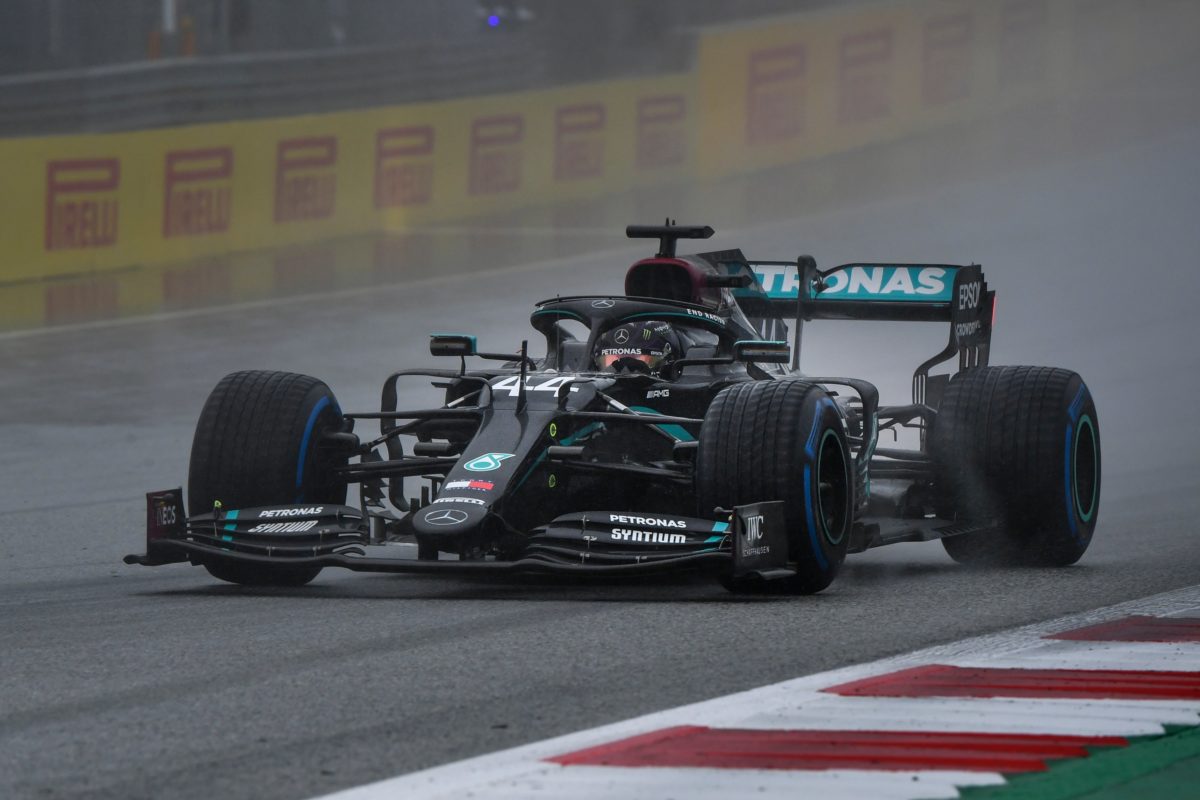 Lewis Hamilton has braved extremely wet weather to qualify on pole for the Styrian Grand Prix by 1.2s.

The six-time world champion dominated the latter stages of Q3 at the Red Bull Ring, adding another half a second to his advantage by nailing a 1:19.273s right at the end in the #44 Mercedes.

He will share the front row with Red Bull Racing’s Max Verstappen, who spun as he tried to overhaul Hamilton with the chequered flag out, while Carlos Sainz (McLaren) is due to line up third and Valtteri Bottas (Mercedes) fourth.

Esteban Ocon was fifth-fastest, four spots ahead of Renault team-mate Daniel Ricciardo, although the latter is set to start eighth due to a grid penalty for Lando Norris (McLaren).

Conditions continued to improve until the rain got heavier again towards the end of Q2, in which Hamilton was fastest with a 1:17.825s.

Once Q3 got underway, a 1:21s was the best until Hamilton recorded a 1:20.649s in the eighth minute, putting Bottas back to second.

The Dutchman looked a threat of snatching back pole until he half-spun between Turns 9 and 10 on his final lap, effectively locking #44 into pole.

Sainz then jumped from seventh to third on a 1:20.671s, Ricciardo improved his lap time slightly but not eighth position at that point, and Norris lifted himself from 10th to fifth.

The latter was shuffled back a position when Bottas broke the beam again, but the Finn was 0.999s slower than Hamilton even before the Briton set the fastest lap of Q3, which stretched the difference between the Mercedes to 1.428s.

Norris will not keep sixth spot on the starting grid due to passing under yellows in Practice 1, an indiscretion which drew a three-position grid penalty.

As such, Alexander Albon (Red Bull) is promoted to Row 3, with Pierre Gasly (AlphaTauri) set to start seventh and Ricciardo eighth.

Norris will be joined on Row 5 by Vettel, who was 2.378s slower than Hamilton and 0.459s away from Ricciardo, and who essentially had only got into Q3 because his Ferrari team-mate could not.

Leclerc sat 11th when he started his final run in Q2, as the rain started getting heavier again, and could find no improvement thereafter.

The Monegasque driver was therefore consigned to the sixth row of the grid alongside Williams’ George Russell, for whom 12th represents a career best, with the top 15 rounded out by Lance Stroll (Racing Point), Daniil Kvyat (AlphaTauri), and Kevin Magnussen (Haas).

Sergio Perez (Racing Point) was the highest profile victim from Q1, earning only 17th on the grid having spent a significant amount of time in the drop zone.

Kimi Raikkonen was 16th-fastest in a stanza brought to a slightly premature end due to a crash for team-mate Antonio Giovinazzi.

The Italian’s Alfa Romeo snapped on the kerbs between Turns 9 and 10 inside the final two minutes before dragging its rear end along the barriers.

Running continued despite the debris which Car #99 left, although a red flag finally came with 13 seconds remaining once Giovinazzi came to a stop at Turn 4.

Nicholas Latifi (Williams) was therefore left in 18th, ahead of Giovinazzi and Romain Grosjean (Haas).

The latter had run off on his out lap and did not set a time, although the team reported a possible water pump failure for Car #8.

Race start is scheduled for Sunday at 23:10 AEST, with 71 laps again the journey.