Dixon notches up third win in a row, Power runner-up

Dixon notches up third win in a row, Power runner-up 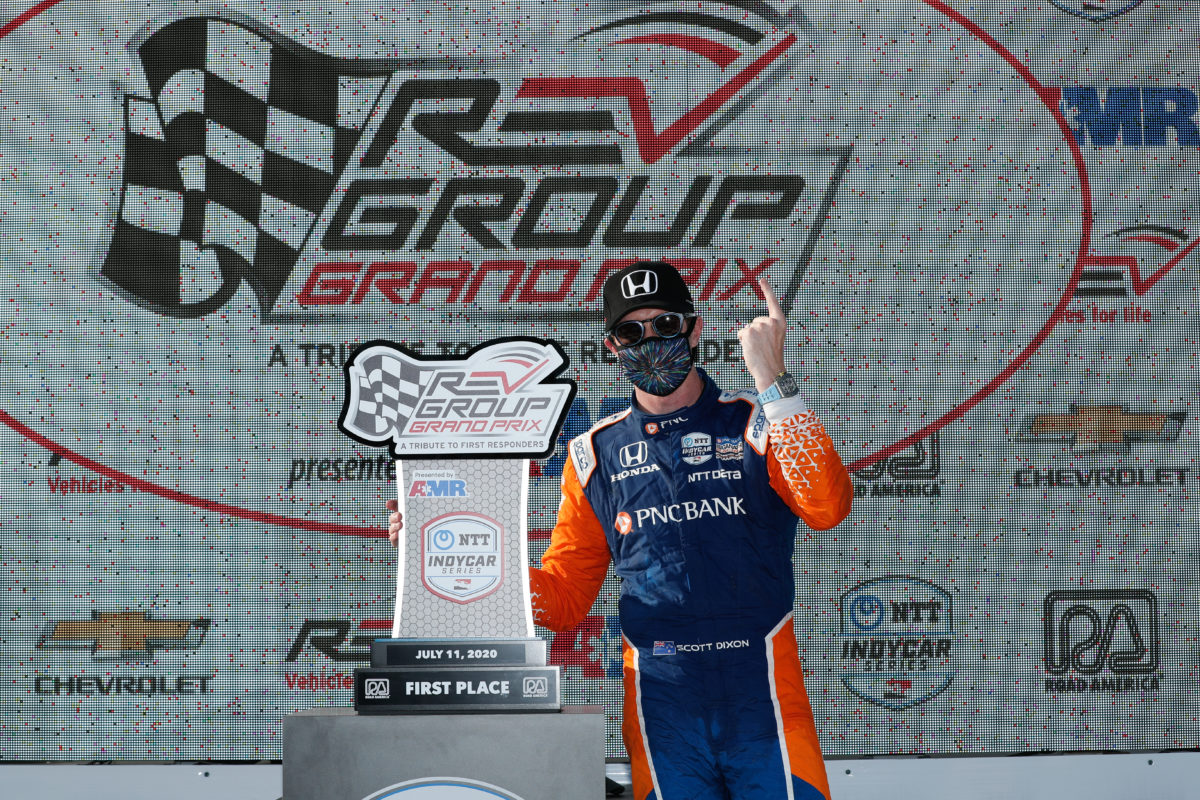 Scott Dixon remains unbeaten after the first three IndyCar races of 2020 as Will Power finished second in the Road America opener.

Power (Team Penske) led at one point, barely holding off Dixon on the race track, but lost position with another pit lane issue and eventually finished 2.5s adrift of the #9 Chip Ganassi Racing entry.

Josef Newgarden had edged Ryan Hunter-Reay (Andretti Autosport) to pole and while the latter started on Row 2 due to the split qualifying format, he was able to pressure the #1 Team Penske car for the lead through the opening corners.

Power dropped from fifth on the grid to eighth when he was baulked by front row starter Jack Harvey (Meyer Shank Racing) and then copped a touch from Santino Ferrucci (Dale Coyne Racing w/ Vasser-Sullivan), while Dixon took up sixth.

Newgarden continued to lead, with Graham Rahal (Rahal Letterman Lanigan Racing) and Ferrucci having passed Hunter-Reay for second and third respectively, when Power was among the first to pit on Lap 13, from 10th.

That saw the Queenslander emerge third from the cycle, behind Newgarden and Ferrucci, Dixon was seventh, and Rahal sat outside the top 10 after a refuelling problem.

Palou held fourth but was coming under pressure from Hunter-Reay, Harvey, and Dixon by the time the latter peeled off on Lap 25.

Several more took their second stops in the next couple of laps, during which Newgarden stalled twice, Palou had a slow service, and Power therefore claimed the effective lead.

In keeping it, he had to stave off a strong attack from Dixon while battling with cold tyres, before pulling a gap of almost two seconds, while Ferrucci ran third from Hunter-Reay, Harvey, and Palou.

Dixon closed back to within a second of the #12 Team Penske car before a Caution came on Lap 38 due to Harvey running off as a result of brake failure.

All pitted when the lane opened but a slow right-rear change cost Power a position, and Ferrucci dropped to seventh having been held up while trying to exit his pit box.

Hunter-Reay therefore rose to third, from Palou, Herta, and Newgarden, but the latter ran wide at the restart and gave up two positions.

The yellows were called again almost immediately due to an incident between Conor Daly (Ed Carpenter Racing) and Pato O’Ward (McLaren SP) in which the former came off the worse.

Palou managed to pass Hunter-Reay for third upon the second restart, although he could not keep the place, then a third Caution came because of a Dalton Kellett (AJ Foyt Racing) off.

For what would be the final restart of the afternoon, Dixon led Power, Hunter-Reay, Palou, Colton Herta, Ferrucci, Rahal, Marcus Ericsson (Chip Ganassi Racing), Simon Pagenaud (Team Penske), and O’Ward, with eight laps off the 55 remaining.

Palou rounded up Hunter-Reay at Turn 1 and went after Power, although the top six remained unchanged thereafter.

Pagenaud lost out in a battle at the restart and took the chequered flag in 12th, two positions ahead of team-mate Newgarden.

Dixon’s series lead over the former is now 62 points, having won races from second, seventh, and ninth this year.

Power, whose earlier results were 13th and 20th, is up to seventh, albeit 83 points away from top spot.

Rossi is all the way back in 22nd in the standings after a first-lap off and late damage due to contact.