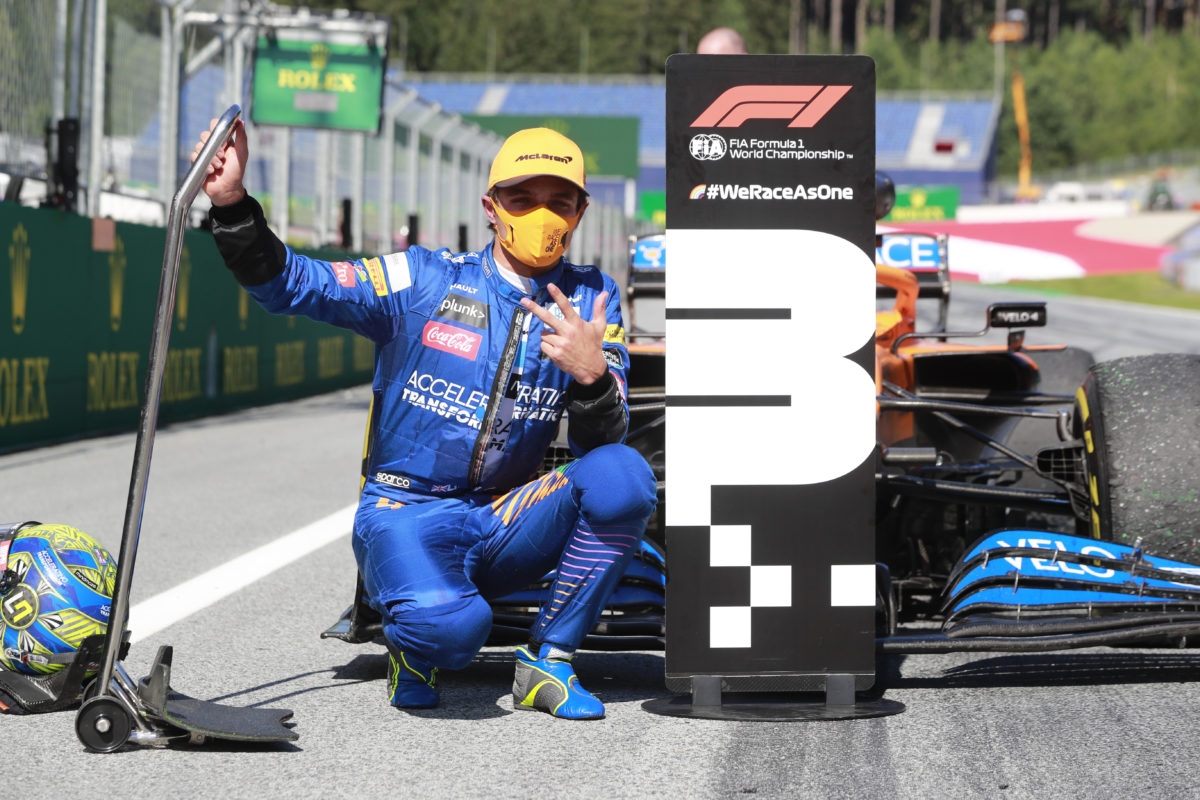 The McLaren driver became the youngest Briton to claim an F1 podium, and the third youngest to climb onto the dais in the sport’s history.

It’s an achievement which came courtesy of a late charge; putting an aggressive move on Sergio Perez that saw the pair bang wheels at the Remus Kurve before setting the fastest lap on the final lap of the race as he pursued Lewis Hamilton.

The gap to Hamilton, who was running second but carrying a five second penalty for dumping Alex Albon off the road, was 4.8 seconds at the flag.

“The were a few points during the race where I thought I kind of fudged it up quite a bit.

“I dropped to fifth with a few laps to go. Carlos (Sainz) was almost getting past me, but I didn’t give up and I managed to get past Perez and I ended up on the podium.”

Norris lined up third on the grid following a late penalty for Hamilton after the six-time world champion failed to reduce speed under yellow flags during qualifying.

As the race entered its final phase Norris found himself battling with Perez (who had picked up a five second penalty for speeding in pit lane) and team-mate Carlos Sainz in what had proved a combative outing for the 20-year-old.

Leaving the door invitingly open under braking for the Remus Kurve, Perez lost out to Norris as the pair banged wheels on Lap 69 of 71.

“When I had to get past Checo (Perez), I just knew he had a five-second penalty but nothing more than that,” Norris explained.

“So I knew… not just because of Lewis, because I didn’t know at that time, but I knew I had to try to get past him.

“Then there was the Lewis penalty that came up and then I had to turn it up a little bit and start pushing.

“I had three really tough laps, locking up, and it was going downhill quite quickly but I recovered well I think and I’m here so I’m happy.”

The result marks the second podium result in three grands prix for McLaren, going back to the end of 2019 when Sainz took third in Brazil.

Like in Austria, that performance too came as a result of Hamilton being penalised post-race.

In Austria, Sainz ended the race fifth meaning McLaren sits second in the constructors’ championship, 11 points behind Mercedes and seven clear of Ferrari.

“I’m so happy and proud of the team,” Norris said of his podium.

“Considering where we were a few years ago, to last year, to now, I think is a pretty cool achievement and I’m proud to be part of it all.”

F1 continues at the Red Bull Ring this weekend for Round 2 of the season with the Styrian Grand Prix.