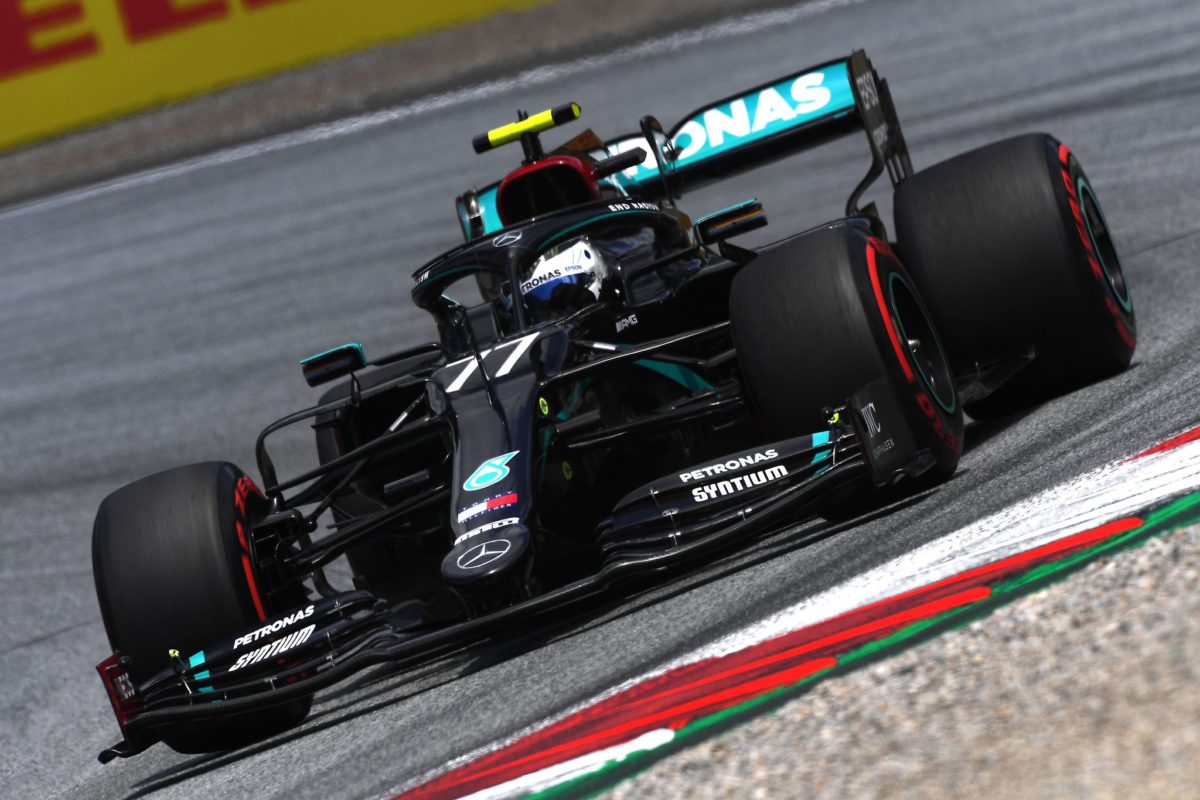 Valtteri Bottas has won a season-opening Austrian Grand Prix of high drama while Lewis Hamilton missed out on a podium due to a second penalty in a handful of hours.

The Mercedes-AMG Formula One Team should have been a comfortable one-two on car pace alone, even before Max Verstappen retired with a technical problem early in the piece, but the Red Bull Ring’s punishing kerbs made them nervous before Safety Cars contributed to Hamilton’s downfall.

The Briton took the chequered flag in second position but is officially classified fourth owing to a five-second penalty for spinning out Alexander Albon just over 10 laps from home.

Hamilton had already been handed a grid penalty within an hour of the grand prix getting underway, putting Car #44 back three spots to fifth for the start, and his second sanction of the day meant that Charles Leclerc somehow finished second in his Ferrari.

McLaren’s Lando Norris ensured that he snatched third by setting the fastest lap on the 71st and final lap of the motor race.

Officially, 13 cars were classified although only 11 actually made it to the finish, with Daniel Ricciardo out after just 17 laps due to a mechanical issue for his Renault.

Bottas led all the way in the #77 Mercedes, the Finn taking a clear advantage to the first corner from pole position, while Max Verstappen and Lando Norris went side-by-side on their way into Turn 1.

Norris ended up wide and got back into file in third position for the climb towards Turns 2 and 3, from Albon and Hamilton, while Sergio Perez (Racing Point) and Leclerc were in a battle for sixth.

Sebastian Vettel (Ferrari) managed to get by Ricciardo and move into the top 10 as the field concertinaed at Turn 4, while Bottas was more than two seconds up when they got back to the control line for the first time.

He was over three seconds to the good when the #33 Red Bull slowed on Lap 11 and while Verstappen limped back to the pits, and his crew got the car restarted, the fire went out as soon as the Dutchman tried to drive out of his box again.

That left Bottas with a lead of over seven seconds back to Hamilton, who had got Norris on the run to Turn 3 on Lap 4 and breezed past Albon to take what was third position at the time as they approached Turn 4 on Lap 9.

Ricciardo was 10th courtesy of Verstappen’s drama when he too succumbed to a technical problem on Lap 17, later reported to be overheating.

Lance Stroll was also considered a chance of an engine-related retirement when Vettel easily outdragged him up the hill to take eighth on Lap 18 and, surely enough, the Canadian brought his Racing Point into the garage only two laps later.

The Safety Car was called on Lap 25 as a result of Haas’s Kevin Magnussen running long at Turn 3 and pirouetting in the run-off area just as he had been overtaken for 11th by Renault’s Esteban Ocon.

Hamilton had whittled Bottas’ advantage down to a little more than three seconds, with the yellows prompting all but the few who had already pitted to file into the lane.

The Briton ensured that the stack stop was no drama by slowing slightly on his way to the pits, and the McLarens got away with back-to-back services also.

The top eight of Bottas, Hamilton, Albon, Norris, Perez, Leclerc, Sainz, and Vettel remained unchanged, although Perez, who nearly clattered into Norris as he was released, was onto mediums with the rest of the aforementioned on hards.

A restart came on Lap 31, after which Bottas racked up a couple of fastest laps before Hamilton responded with a few of his own.

As #44 started to serious threaten #77, both of the Mercedes drivers were warned about a gearbox sensor problem caused by kerb use.

The matter came to a head around Lap 46 when each were issued identical instructions of “Valtteri, this is James; the gearbox issue is critical, please stay off the kerbs, both cars,” and “Lewis…”

Although there was still tension in the Mercedes camp, it appeared that a one-two was still the more likely outcome until George Russell had to park his Williams just off to the inside of the circuit on Lap 50, drawing the Safety Car for a second time.

Albon had been circulating almost 10 seconds behind Hamilton but came in to fit soft tyres again and resumed in fourth, a position behind Perez.

Norris and Leclerc also changed tyres and emerged in fifth and sixth respectively, while Sainz was into the lane another lap later and took up ninth.

Bottas led the diminishing field back to green on Lap 55 but they were brought back under yellows before the lap was out as a result of Kimi Raikkonen ploughing his Alfa Romeo into the wall sans right-front wheel before he even made the control line.

Albon had passed Perez in that small window of time due to the Mexican pinching a brake at Turn 3 and although he gave it back when he slowed for the Safety Car conditions, they were repositioned before the next restart.

That left Hamilton, still on the hard tyres he took under the first Safety Car, vulnerable to the soft-shod Albon for the next restart on Lap 61.

The Thai driver would ultimately bring about his undoing when he tried to go around the outside of Hamilton at Turn 4 on that lap and was turned into the gravel by the Mercedes pilot.

Norris was looking for a way past Perez when Leclerc took fourth off the McLaren at Turn 4 on Lap 64, before the Monegasque made a huge lunge under Perez at Turn 1 on Lap 66.

Hamilton reset the fastest lap on Lap 67, at which time he was a provisional third with penalty accounted for, and his cause was helped when Perez too was handed an extra five seconds due to pit lane speeding.

Norris shook off pressure from a hustling Sainz to barge his way past Perez and take fourth on the road at Turn 3 on Lap 69.

Bottas finished 0.689s ahead of Hamilton on the road but Leclerc was officially classified in second spot by 2.700s back from Car #77.

Norris did enough to snatch the final podium position from Hamilton by 0.198s, with Sainz fifth in the second of the McLarens.

Perez’s five-second penalty changed nothing in the end as he remained sixth, ahead of Pierre Gasly (AlphaTauri), Ocon, Antonio Giovinazzi (Alfa Romeo), and Vettel.

The latter could have finished higher but essentially took himself out at the first restart when he tried to catch Sainz unawares at Turn 3.

Vettel came from deep but locked the inside front and was already rotating when contact with Sainz’ car ensured that his Ferrari would go around.

William’s Nicholas Latifi was the only non-points finisher with 11th on his debut.

Danill Kvyat (AlphaTauri) and Albon were classified in 12th and 13th respectively despite the former spraying off with a busted left-rear corner and the latter slowing with four laps to go.

Bottas leads Leclerc, runner-up in Austria for a second year in a row, by seven points with one race of at least eight this year in the history books.

Formula 1 races at the Red Bull Ring again next weekend, with practice for the Styria Grand Prix starting on Friday at 19:00 AEST.