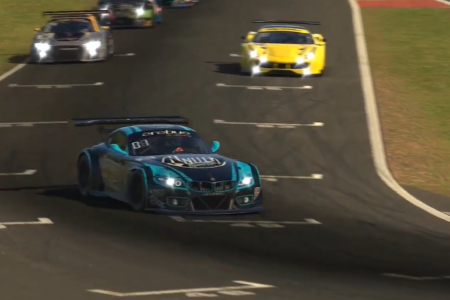 Stewart missed out on pole position to his Pursuit Sim Racing team-mate Blake Purdie in the Top 10 Shootout and stalked Purdie throughout the first stint.

When Purdie was delayed by a lapped car just after the half-hour mark, Stewart made his move into the Chase and slightly extended his lead during the first round of pit stops.

However, Stewart’s race took a turn for the worse a few laps later, when he made contact with Richard Skender’s Mercedes-AMG in the Chase and received a drive-through penalty, which saw him falling behind Purdie.

The race swung back Stewart’s way when Purdie inexplicably decided not to pit during the race’s final Safety Car intervention, even though the caution period fell inside the window for everyone to make it to the finish on fuel.

Stewart ended the series with four victories and five podium finishes from the six rounds and has been awarded the grand prize for the series; a Kincrome Tools Evolution Workshop tool kit and side locker valued at more than $2,500.

“That pit stop (under Safety Car) sealed the deal for me; I was deciding whether or not to do it and I’m pretty glad I did it – it turned out to be the right decision in the end,” said Stewart.

“It was an intense battle with Blake – I didn’t want to hit him; I was just being patient and waiting for the right moment. He got held up by a few lapped cars and that was what got me through.

“There are great people to race against in the series – they’re all clean and up the front it’s really good racing.”

Stewart is planning to use his new Kincrome tool kit on his Toyota 86 race car, which he will race in the Toyota Gazoo Racing Australia 86 Series as part of the Erebus Junior Academy.

Connell’s chaotic afternoon began from the very first lap, when he made contact with Emerson Harvey at Murray’s Corner and received a drive-through penalty.

Connell clawed his way back into the top 10, only to crash heavily into a backmarker at McPhillamy Park; the lengthy pit stop for repairs saw him falling a lap down.

However, Connell was able to un-lap himself during the race’s final Safety Car intervention and in an impressive display of raw speed, he fought back onto the podium.

“It was a pretty crazy day today,” said Connell.

“I made a good start, made a mistake passing someone, got a black flag, went backwards and then got taken out by a lapped car that spun in front of me; I had nowhere to go.

“I didn’t really think a podium was possible at that point, but I thought would push on as hard as I could and pick up a few spots.

“The Safety Car helped and once I was back in the train with everyone, that’s when it was time to go for it and have some fun.”

Finishing third was Paul Auditore; while it was the Tickford Racing mechanic’s sole podium of the season, he was also the only driver to finish every round of the series in the top 10 and he was rewarded for his consistency with second place in the standings.

“The title was a long shot, I had to pray to the racing gods that something would happen to Jobe,” said Auditore.

“It was a smooth race, there was no damage and I got it home on the podium. To finish in the top 10 in every race was my goal from the outset, so it was pretty good to achieve that.

“It’s been a very enjoyable series, well done to Dalton and the Carbon Gaming crew. Any chance I get to jump in the sim, I’ll jump at it.”