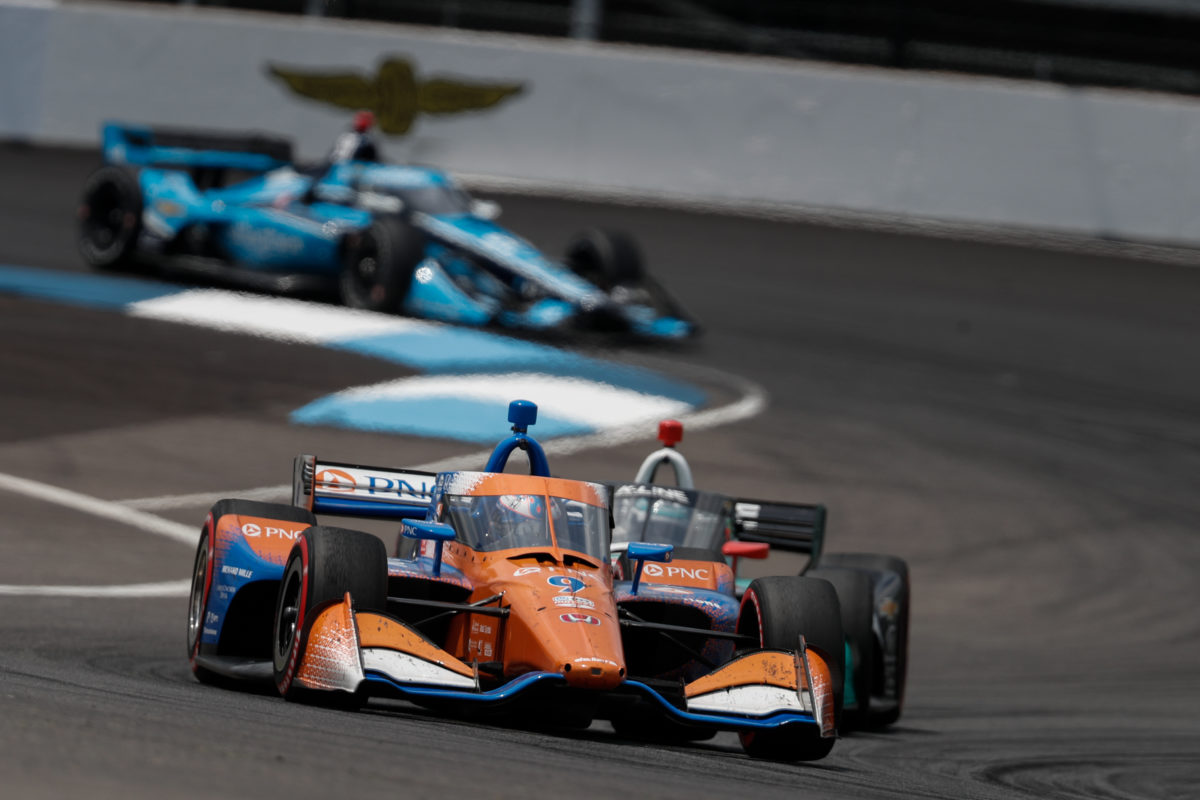 Scott Dixon made the best of a conveniently timed Caution to win the Indianapolis Grand Prix by almost 20 seconds while Will Power fell from pole to 20th.

Having also won the season-opener at Texas Motor Speedway, Dixon (Chip Ganassi Racing) is now 29 points clear at the top of the IndyCar Series after just two races.

Simon Pagenaud (Team Penske) is his nearest rival off the back of a third placing on the Brickyard’s road course, where it was Graham Rahal (Rahal Letterman Lanigan Racing) who finished second as Alexander Rossi (Andretti Autosport) failed to make the chequered flag.

Power (Team Penske) led until he pitted on Lap 17, swapping one set of red tyres for another, and was back in front once the two-stoppers, led by Rahal, made their first on Lap 26 of 80.

Dixon, who qualified seventh and emerged sixth from the first corner, started on black tyres and held position until he exchanged them for reds on Lap 10.

With 35 laps completed, Power led team-mate Josef Newgarden and Meyer Shank Racing’s Jack Harvey, the latter of whom qualified on the front row.

Dixon was 10th having made his second stop two laps earlier and the New Zealander was a major beneficiary when Oliver Askew lost the rear of his McLaren SP car and smacked the wall entering the main straight.

The Caution trapped the top three, who had to wait for pit lane to open before they could file in, at which time Rahal assumed the lead again.

Behind Car #15 were two of the other two-stoppers in Spencer Pigot (Citrone Buhl Autosport with RLL) and Conor Daly (Ed Carpenter Racing), Dixon was fourth, Power sat 13th, and Newgarden was next.

The front-runners were unchanged at the restart, before Dixon and Colton Herta (Andretti Autosport) got by Daly on Lap 42.

The former continued his rise with a move on Pigot on Lap 45 before passing Rahal, who was on black tyres, for the lead on Lap 49.

Dixon had gapped Rahal by 9.5s by the time the latter made his second pit stop on Lap 54 with Pagenaud, who qualified only 20th, following #15 into the lane from sixth position.

Chip Ganassi Racing responded by calling Car #9 in on the following lap and Dixon maintained his effective lead over Rahal.

Power also pitted on Lap 55, taking on black tyres, but he stalled when trying to drive out of his box and plunged to 23rd.

Once the cycle had completed at the end of Lap 62, Dixon led by around 13 seconds from Rahal, Pagenaud, Herta, rookie Rinus VeeKay (Ed Carpenter Racing), Marcus Ericsson (Chip Ganassi Racing), and Newgarden, with Power was still 23rd.

Rahal faced pressure from Pagenaud in the latter stages but there was no change to the top eight, rounded out by Pato O’Ward (McLaren SP), thereafter.

Newgarden sits third in the series, 40 points behind Dixon, with Power back in 15th and Rossi in 23rd.

The latter occupied seventh position at the only restart of the race but soon pitted with a technical problem and was classified 25th, second-last, for the afternoon.

Races 3 and 4 take place next weekend at Road America.