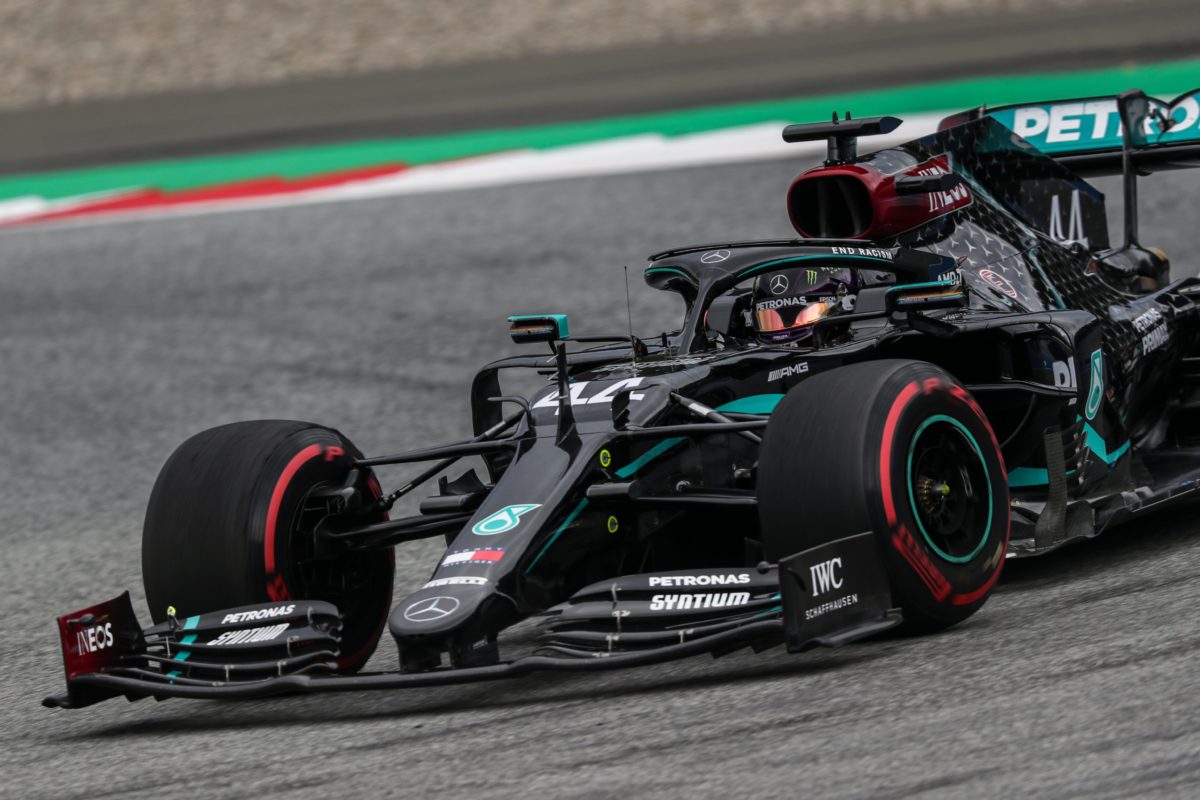 Hamilton was the only driver to get into the 1:04s in both 90-minute sessions at the Red Bull Ring, with Bottas next-best in each.

Racing Point’s Sergio Perez drove what some have dubbed a ‘pink Mercedes’ to third-fastest, albeit more than six tenths off the pace of the quicker of the new-look black Mercedes.

Hamilton’s benchmark came just before halfway through Practice 2, with a set of new soft compound tyres bolted onto Car #44.

Perez had a scare in Practice 1 when his RP20 puffed smoke, although the Mexican was sent back out soon enough after his crew attended to Car #11 in the garage.

Sebastian Vettel ended up fourth-fastest courtesy of the 1:04.961s which he clocked moments later in his Ferrari.

Just as the rest of the top 16 in the session had done, the German set his quickest lap on the softest available compound, the C4, but he struggled under brakes with hards fitted late in the session.

Daniel Ricciardo led the way for Renault with a 1:04.972s in a low-key session for the Australian, who did not set a time in the first half-hour.

Verstappen had one of the more eventful days, with a spin exiting Turn 1 during the morning session, then a tour of the gravel lining Turn 5 in the afternoon.

The Dutchman wasn’t alone on either count, with Red Bull’s Alexander Albon and Williams’ Nicholas Latifi looping their cars at the first corner in Practice 2.

Daniil Kvyat rotated his AlphaTauri at Turn 10 in the earlier session and snapped into a spin at Turn 1 in the latter session, while Romain Grosjean (Haas) found himself facing the wrong way in his Haas at Turn 3 in the final half-hour of proceedings.

Kimi Raikkonen (Alfa Romeo) also ran off at Turn 5 in the first half of Practice 2.

Hamilton’s pace-setter in Practice 1, which was run in particularly overcast conditions and even featured a brief period of light rain around 15 minutes in, was a 1:04.816s.

That session also saw a Virtual Safety Car intervention to retrieve a piece of bodywork shed by Esteban Ocon’s Renault, before the Frenchman set a time in the afternoon good enough for 11th fastest all told.

Practice 3 for the Austrian Grand Prix starts at 20:00 AEST on Saturday, and Qualifying from 23:00.