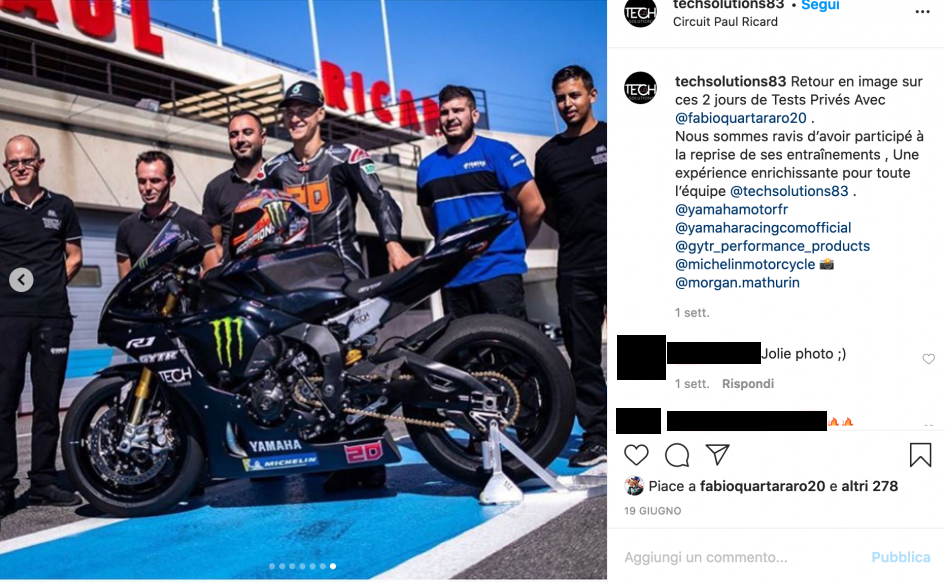 A grand prix motorcycle rider, believed to be Fabio Quartararo, is set to face a hearing at this month’s season-opener for an alleged breach of testing regulations.

“The FIM MotoGP Stewards have been advised of possible breaches of the FIM Grand Prix Regulations covering practice and testing, specifically Article 1.15.1. c) Rider Training and Track familiarisation, regarding the type of machines permitted for rider training,” reads a release from the FIM, in part.

As a rider of a Yamaha, a manufacturer which is not allowed concessions, SIC Racing Team’s Quartararo is prohibited from taking part in private MotoGP tests.

The above mentioned sporting regulations furthermore state that, “For motorcycles of the same capacity class as the rider is entered in, only standard production road-homologated motorcycles may be used,” with a selection of modifications allowed, notionally for safety.

However, a recent social media post suggests that Quartararo may have fallen afoul of the restrictions concerning modifications.

The post, uploaded by the account of French firm Tech Solutions and still live at the time of writing, shows the future Yamaha Factory Racing pilot on one of the Japanese marque’s R1 motorcycles at Circuit Paul Ricard in June.

“Hearings for riders who may have broken the rules should be scheduled to take place at the 2020 Gran Premio Red Bull de España at the Circuito de Jerez-Angel Nieto, in order to hear from the parties concerned and to allow further time to investigate the details,” advises the FIM in that statement.

“At this stage the FIM will not make any further comments on this matter.”

The rider(s) in question is (are) not named, nor even the specific class in which they compete, with each of MotoGP, Moto2, and Moto3 referred to.

Pramac Racing’s Jack Miller is among those who has returned to the track recently, taking to the Circuit de Barcelona-Catalunya on a Ducati superbike last week.

The Spanish MotoGP takes place in the south of the country, at Jerez, on July 17-19.