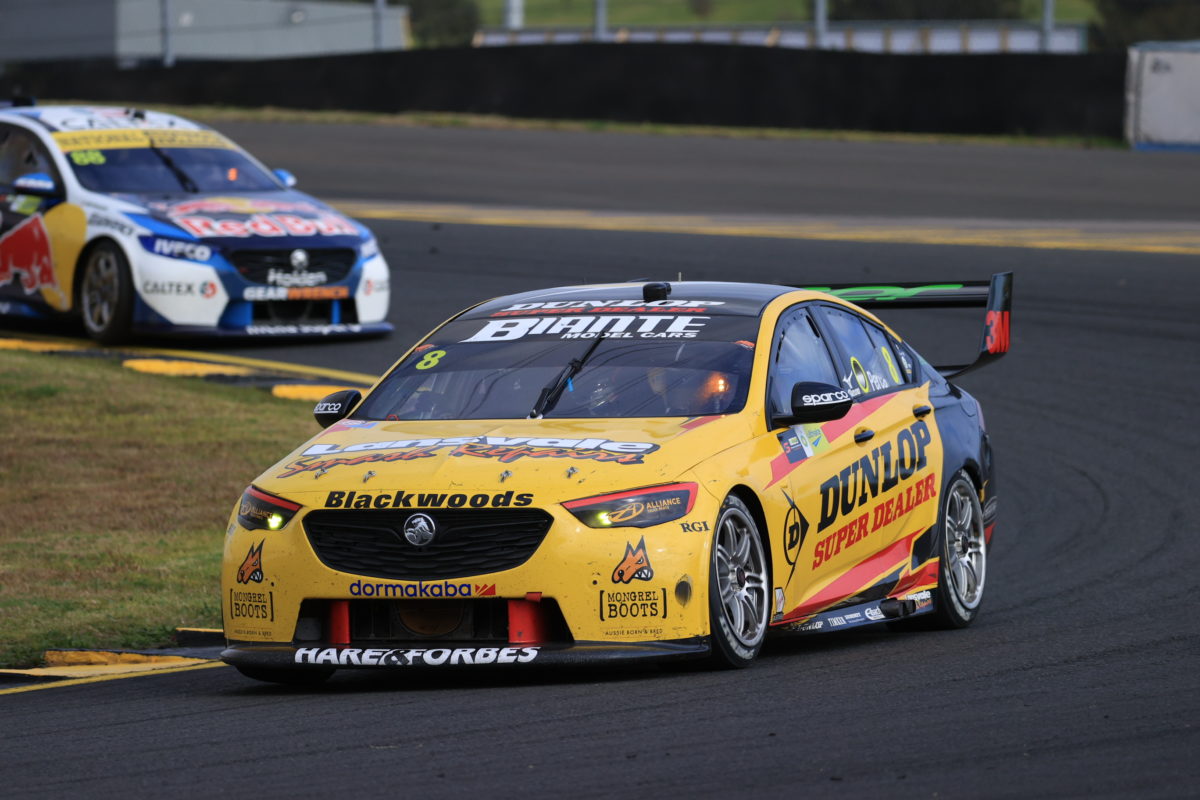 Nick Percat has won his 200th career Supercars Championship race in a contest which came to life almost immediately at the BP Ultimate Sydney SuperSprint.

While the Brad Jones Racing driver prevailed in a highly entertaining Race 8 of the season, Jamie Whincup could only manage second after effectively leading the first half of his own milestone, 500th race from pole.

Whincup had made a strong start from pole position while van Gisbergen ceded second spot to McLaughlin as they swept into the first corner.

Fabian Coulthard (#12 Shell V-Power Mustang) held fourth only as far as the exit of Turn 3, where he was rounded up by Waters, and the Tickford Racing driver then dived past van Gisbergen at Turn 4.

Percat relegated van Gisbergen another spot by the end of the standing lap, as it became clear that the #97 ZB Commodore was one of the cars which had started the race at least somewhat compromised on rubber.

As the chopping and changing of positions continued due to teams rationing their five sets of tyres across three races this weekend, it was Percat who was making the most obvious impression.

The BJR driver jammed Car #8 down the inside of Waters, who was stuck behind McLaughlin, at Turn 6 on Lap 5 to move into third.

Percat was second just under a lap later having seized the spot from #17 at Brock’s 05 corner, at which time Whincup was almost 2.4s to the good.

McLaughlin dropped two more positions before the end of Lap 6, to Waters as they rounded Corporate Hill and then to Reynolds into the final complex.

As van Gisbergen and Coulthard continued to drop, with both outside the top 10 by the end of Lap 9, Percat set about reeling Whincup in.

Van Gisbergen was into the lane from 11th on Lap 10 and McLaughlin from fifth on Lap 12, while Percat had caught Whincup by the time he peeled off on Lap 14.

Triple Eight responded by calling Whincup in on the following lap, but chose only to change working side tyres on #88 whereas BJR had replaced all four hoops on Car #8.

Once Anton De Pasquale (#99 Penrite ZB Commodore) had pitted at the end of Lap 18 to complete the cycle, the pole-sitter led by near enough to an exact second from Percat.

The change for the lead came on Lap 22, when Percat squeezed down the inside of Whincup at Turn 4, and the then two-time Virgin Australia Supercars Championship race winner moved his advantage past a second by the end of Lap 24.

Mostert put a similar move on Reynolds to take fourth during that time, before McLaughlin also got by the lead Erebus Motorsport entry, at Turn 10 on Lap 26.

Those moves set up a brilliant battle for the final podium place, with Mostert initially looking like he might pick off his former Tickford team-mate on Lap 29 having shown the nose at Turn 6 and carried that through to Turn 7.

The net effect, however, was that the Walkinshaw Andretti United pilot was vulnerable by the time they got to the final complex of corners and McLaughlin managed to pull off an over-under pass.

That was not the end of the story though, McLaughlin getting by Waters on the far side of Corporate Hill next time around, with a rub and a bump from the black Mustang for his troubles.

Before long, Mostert and Reynolds had relegated Waters all the way back to sixth, on the penultimate lap.

That finally settled matters at the head of the field, with a full 13 seconds between Whincup and McLaughlin at the end.

“He can’t be here but thank you Brad for having faith in me. It’s taken a few more years than I would have wanted but BJR, AE (Andrew Edwards, engineer), everyone did a mega job and the Dunlop Super Dealer car is hooked up.

“As soon as we were in a good position, we threw everything at it because you live for now and see how we go in Race 3 (of the event).

“I knew I had much better tyres (than Whincup) so I edged up. I wanted to get it done before the pit stop but couldn’t quite get there.

“On my first lap, when I passed Shane, I thought ‘Hold on, there’s something going on here’ so I was straight on the radio and said ‘Mate, they’ve not put any tyres on so we need to go.’

“It was mega, a good battle with Scotty and Cam and I came up with a win. It’s awesome.”

Scott Pye (#20 DeWalt ZB Commodore) ended up one spot outside the top 10 having been passed by Courtney at Bond Bend (Turn 2) on Lap 27, and Coulthard finished 15th.

McLaughlin’s championship lead is 35 points back to Whincup, with Percat 165 off top spot in sixth position and van Gisbergen up another position to seventh.

The final race of the weekend is scheduled for 14:35 local time/AEST.