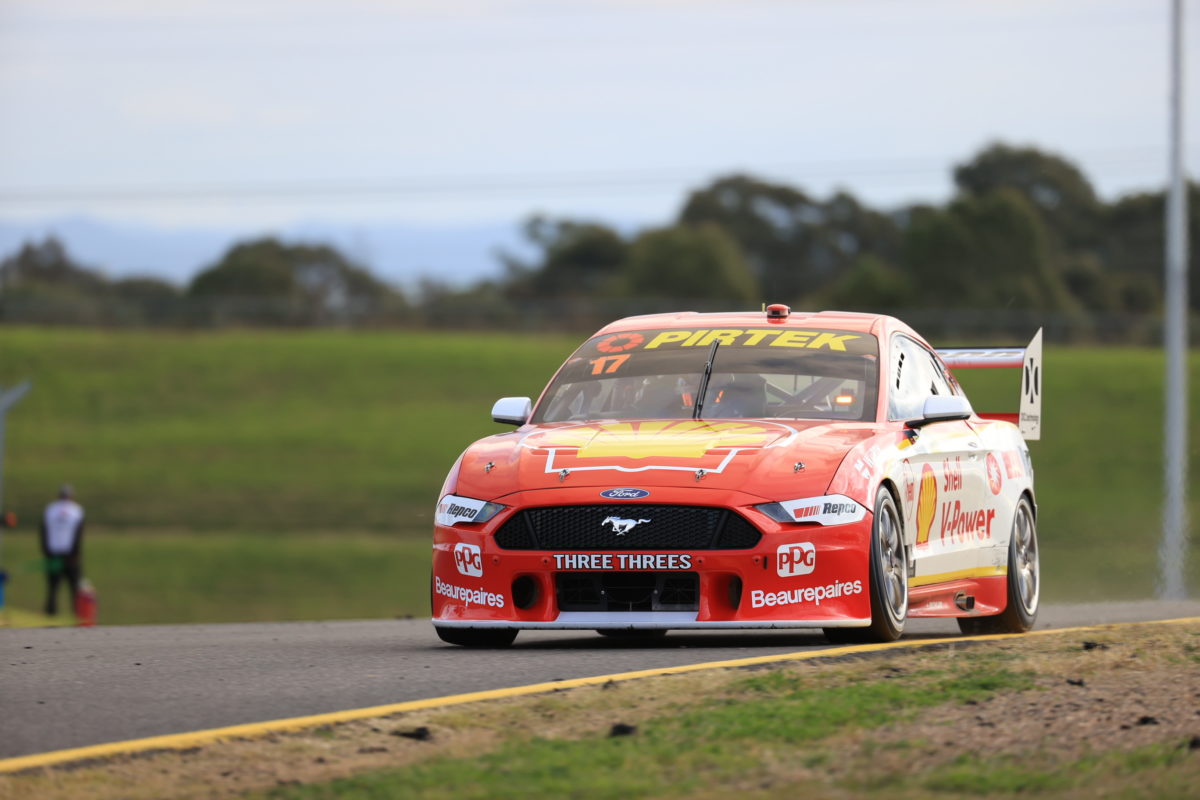 Scott McLaughlin has taken a third win of the 2020 Supercars Championship in Race 9 at the BP Ultimate Sydney SuperSprint as Lee Holdsworth charged to second.

But for the run to the first corner, McLaughlin effectively led all the way in the #17 Shell V-Power Racing Team Mustang while Holdsworth’s cause was helped by having some tidy rubber left for the final encounter of the weekend in Tickford Racing’s #5 entry.

The Red Bull Holden Racing Team’s Jamie Whincup finished third, almost 10 seconds behind the Truck Assist Mustang, while David Reynolds got home another 13 seconds back in the #9 Penrite ZB Commodore.

Whincup made a better start than McLaughlin but could not clear Car #17 before they got to Moffat Corner (Turn 1) and the pole-sitter prevailed on the inside at the next braking zone.

Reynolds was able to round up Holdsworth, who was bottled up behind Hazelwood, at Turn 6 on Lap 2, although the Erebus Motorsport and Tickford drivers continued to fight each other for several laps more.

Having been under pressure himself, Hazelwood passed Waters at Turn 6 on Lap 4 and was soon tailing third placed van Gisbergen.

The 2017 Super2 Series winner gave the 2016 Supercars champion a touch at Turn 3 on Lap 9 before diving past to take third position at the bottom of the hill.

Hazelwood quickly closed up on Whincup, who was a little over six seconds behind McLaughlin when he pitted at the end of Lap 13 and took tyres down the working side of Car #88.

McLaughlin was called in a lap later, as were van Gisbergen from fourth and Percat from fifth, with the former taking four tyres and the latter two only having two changed.

McLaughlin rejoined in sixth, just ahead of Whincup, but was already about 2.4s clear of his nearest rival by the time they crossed the control line two laps later.

Hazelwood stayed out until Lap 16, at which time the Brad Jones Racing crew changed tyres on all corners of Car #14 and he resumed in 11th with just Holdsworth left to pit in front.

As Car #5 filed into the lane at the end of Lap 18 to complete the cycle, Hazelwood put a move on Fabian Coulthard (#12 Shell V-Power Mustang) at Turn 6 to take up an effective ninth.

Holdsworth was 12th, but had some of the better tyres in the field still at his disposal, and cut a swathe through the cars in front.

He was sixth by the end of Lap 22 and made three fairly easy passes on the next lap alone, picking off van Gisbergen at Bond Bend, Winterbottom at Turn 4, and Reynolds at Turn 10.

It only took two more laps for Holdsworth to catch Whincup, who made life easy when the Tickford man showed the nose at Bond Bend.

McLaughlin’s lead was 5.3s at the time of that pass, although the rate at which Holdsworth was making up ground to the #17 DJR Team Penske entry diminished thereafter.

There was 2.7s between them as they started the 32nd and final lap but McLaughlin was not seriously threatened.

“The car was so much better on its tyres that race,” said the race-winning New Zealander.

“When everyone evened out with the tyres and where we were, to be able to show our true pace over the long run was really cool. I just got into a rhythm and got going and it felt really good.

“I’m really proud of everyone at Shell V-Power Racing because we rolled out with a good car but not in the race so it’s nice to make it better and continually improve, no matter where we are.”

Whincup had a lonely run to the chequered flag, Reynolds saw off pressure from Winterbottom not long after the stops to take fourth, and Winterbottom similarly withstood some subsequent attention from van Gisbergen.

The latter ended up with De Pasquale behind him on the last lap but survived to hold onto sixth, while Hazelwood ended up eighth, one spot ahead of team-mate Percat.

Coulthard was the only non-finisher of the race with 31 laps to his name after an apparent technical drama very late in the piece.

The next event of the Virgin Australia Supercars Championship is the Truck Assist Winton SuperSprint on July 18-19.