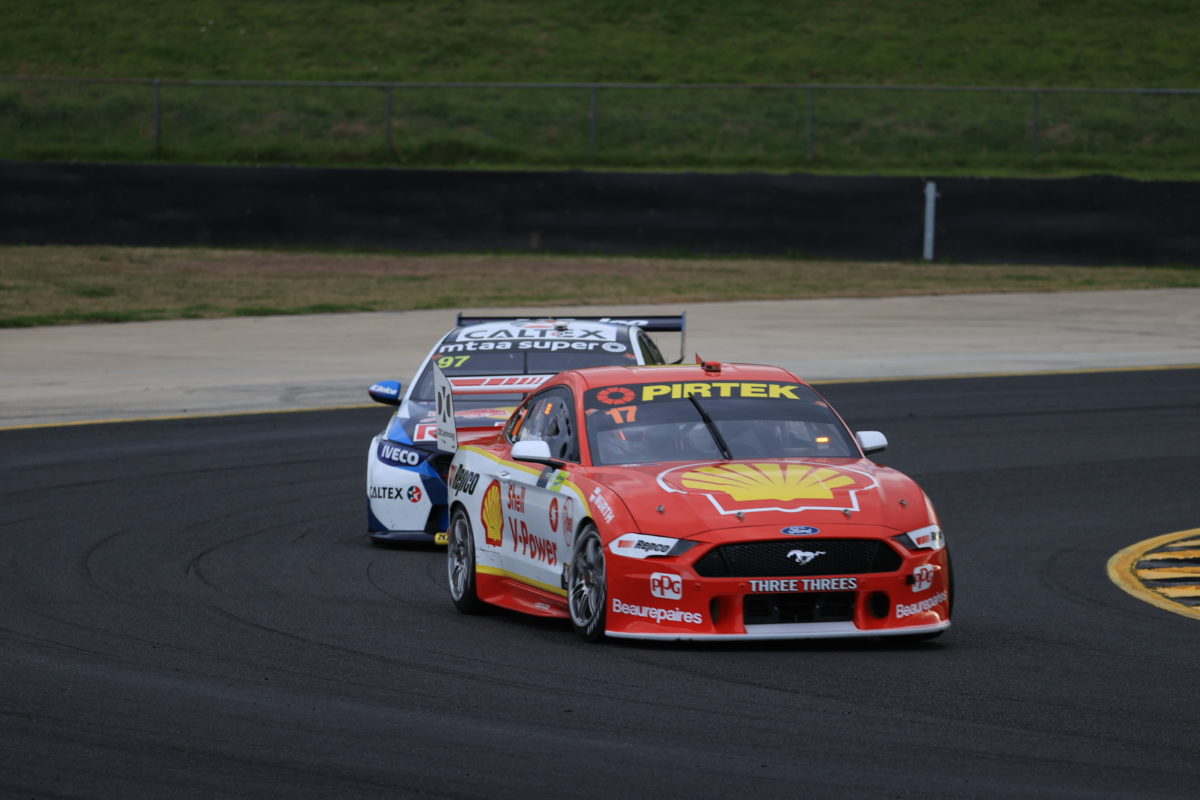 Scott McLaughlin has withstood heavy pressure from Shane van Gisbergen to win Race 7 of the season upon the return of the Virgin Australia Supercars Championship.

The Shell V-Power Racing Team driver had only 0.1876s on his Kiwi compatriot at the chequered flag after the opening 32-lap encounter at the BP Ultimate SuperSprint despite somewhat contrasting approaches to the race.

Van Gisbergen (#97 ZB Commodore) bettered McLaughlin (#17 Mustang) from the outside of the front row at the initial launch but the pole-sitter had his nose ahead as they arrived at Moffat Corner (Turn 1) and took the advantage back.

Whincup (#88 ZB Commodore) emerged third from the opening corners while Mostert finally wrested fourth from Percat as they rounded Turn 05.

McLaughlin continued to pull away, with his lead peaking above 3.6s on Lap 8 before van Gisbergen started to turn the tide.

Whincup, who had seen off early pressure from Mostert, was first of the top five to pit, on Lap 14, and he rejoined between Tickford Racing team-mates Cameron Waters (#6 Monster Energy Mustang) and Lee Holdsworth (#5 Truck Assist Mustang).

A steadier van Gisbergen had caught the #17 Mustang by the time McLaughlin was called in to pit on Lap 15, with the initial race leader matching Whincup by taking four new tyres.

Rather than trying to cover off McLaughlin, van Gisbergen was sent around for three more laps before stopping.

He re-emerged behind Holdsworth but, having also been taken four new tyres versus two for Car #5, was able to slice past easily at Bond Bend (Turn 2) just over a lap later.

Van Gisbergen’s charge continued thanks in part to Whincup.

The seven-time champion got by the early-stopping Waters on the way to Turn 1 on Lap 21, making room for his team-mate to show the nose as they rounded the sweeper and drive past the black Mustang.

Van Gisbergen was not done, diving past Car #88 three corners later, at which time McLaughlin was a little more than three seconds up the road.

As he had done during the first stint, the Triple Eight driver all but wiped out the margin to the #17 Mustang and was hassling the leader by the end of Lap 29.

McLaughlin then had to deal with a bad sportsmanship flag for kerb overuse, but was good enough to keep #97 behind him in the three laps which remained.

“He’s like a cockroach, you can never get rid of him,” quipped the race winner of van Gisbergen.

“He’s always around. It was unbelievable, a good battle.

“I knew I was going to be in trouble on that last stint because of the way he came at me in the first.

“We’ve got a bit of work to do with regard to how we tune up but you take them when you can get them.

“It was a tough last five laps but I did the best I could and thankfully we came out on top. It was great racing.”

Whincup finished more than nine seconds back while Mostert had to pass his former team-mates in Waters and Holdsworth on the road in the second stint to take fourth.

Percat came from even further back to finish where he ended the opening lap, with Waters finishing sixth.

Anton De Pasquale (#99 Penrite ZB Commodore) could not find a way past Holdsworth and had to settle for eighth, one spot behind Car #5.

Mark Winterbottom (#18 Irwin Tools ZB Commodore) finished ninth and Fabian Coulthard (#12 Shell V-Power Mustang), who ran seventh initially but came under attack and dropped three spots on the road in the opening stint, got back to 10th.

Todd Hazelwood (#14 Brut ZB Commodore) was among those held up by Coulthard before the pit stop cycle and eventually finished 11th.

James Courtney gained net nine positions to take 12th in his first race in the #44 Boost Mobile Ford Mustang, while David Reynolds (#9 Penrite ZB Commodore) went the other way from 18th on the grid to 21st at the finish.

McLaughlin’s championship lead over Whincup is now 41 points, while van Gisbergen is now 167 points back but an improved eighth position in the standings.

The Sunday programme commences with back-to-back 15-minute qualifying sessions for Races 8 and 9 respectively, from 10:35 local time/AEST.