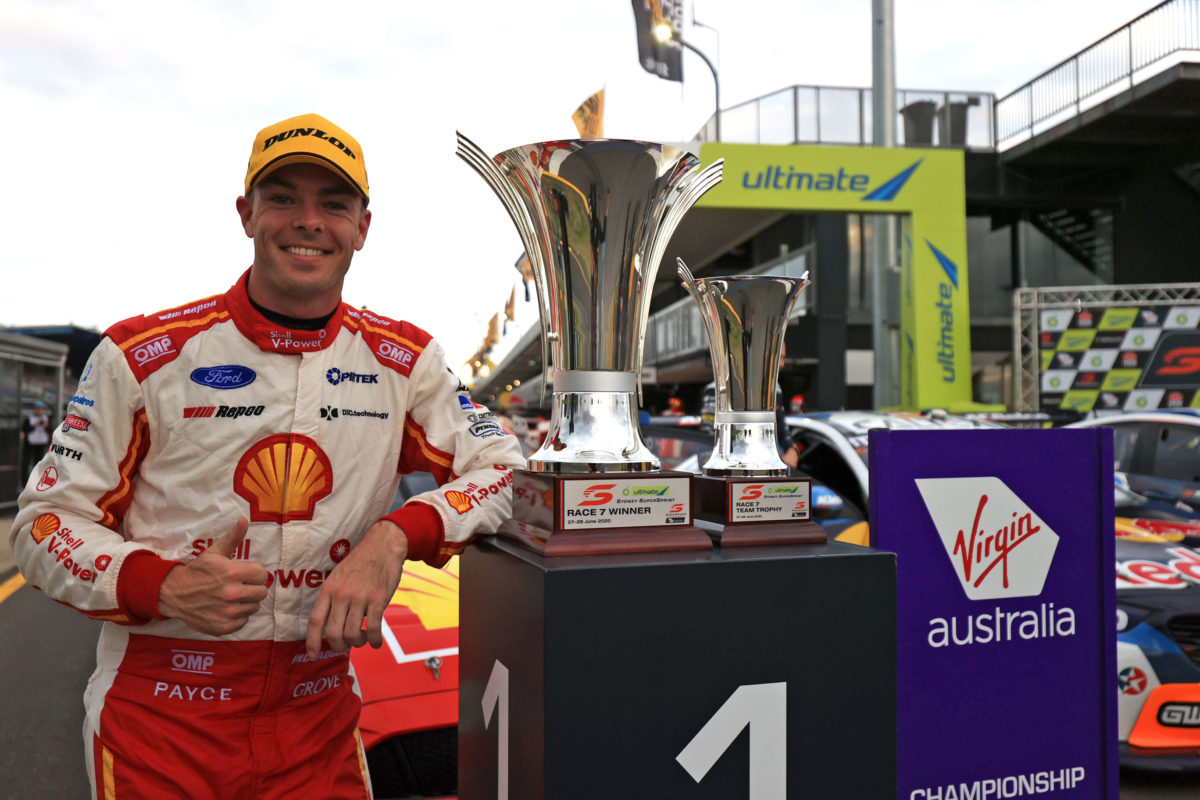 McLaughlin effectively led all the way from pole position in the Virgin Australia Supercars Championship’s first race back since the outbreak of COVID-19, at Sydney Motorsport Park.

However, eventual runner-up Shane van Gisbergen and his Red Bull Holden Racing Team car appeared to be at least a match for the championship leader’s pace over the course of the 32-lap affair.

Van Gisbergen, who started from the outside of the front row, caught the #17 Shell V-Power Mustang at the end of each stint and all that separated them at the chequered flag was 0.1876s.

“It’s a lot better than doing it as cartoons,” said McLaughlin of being back in a real race car after 10 weeks of racing in the BP Supercars All Stars Eseries, as well as contesting IndyCar’s iRacing Challenge.

“I’m really enjoying being back, smelling the fumes, getting amongst it. To sort of hit the ground running and be fast is fantastic but we need to find a little bit more pace.

“Overall, (it’s a) good start, and you sort of just want a clean one and we did.”

McLaughlin also dismissed suggestions that the much talked about restrictions on data collection in place this weekend might be a significant hindrance.

On how set-up discussions will proceed, he remarked, “I think it relies a lot on myself and my feedback and what I want from the car.

“I’m pretty sure exactly what I want from the car, it’s just a matter of those guys finding it, but I’ve got a little French magician (Competition Director Ludo Lacroix) on my side and a Pom (Race Engineer Richard Harris), and they both do a pretty good job.

“We’ll see if we can tune her up and get it a little bit better.

“Overall, I’m really happy. The car rolled out of the truck really fast; just needs a little bit more, especially over a race run, and we’ll be OK.”

In the other DJR Team Penske car, Fabian Coulthard got home in 10th after a serious battle prior to his pit stop.

A pinched brake on Lap 8 of the race saw him cede seventh spot to Anton De Pasquale and drop a handful more before he could have the flat-spotted tyre replaced.

“I made a small error in the race and flat-spotted the right-front tyre and backed up everyone behind me,” explained Coulthard.

“We have lots of things look at overnight, but we have a little bit of time now, so hopefully we’ll tune her up and come back stronger tomorrow.”

McLaughlin’s advantage in the championship is now 41 points after his nearest rival, Jamie Whincup, finished third in Race 7 while Coulthard is 10th in the standings.

Tomorrow’s action commences with Qualifying for Race 8 from 10:35 local time/AEST.