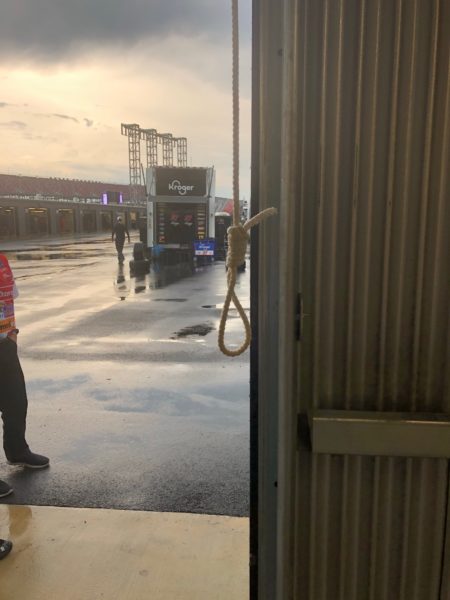 The photograph of the ‘noose’ released by NASCAR

NASCAR President Steve Phelps maintains that the ‘noose’ found in an African American driver’s infield garage was ‘real’ despite the FBI concluding that it was a garage door pull rope.

His comments have been made in conjunction with the release of a photo of the ‘noose’ in question (See right) which was discovered on Sunday (local time) in the garage used for Bubba Wallace’s car at Talladega Superspeedway.

According to a statement from NASCAR on Tuesday (local time), the Federal Bureau of Investigation did not establish a hate crime, and indeed determined that the rope had been such since as far back as October 2019.

Nevertheless, all members of the stock car category’s industry will undertake “sensitivity and unconscious bias training”, and surveillance will be stepped up at tracks.

Phelps admitted that “In hindsight, we should have — I should have — used the word ‘alleged’ in our statement,” but otherwise stood by the course of action which was taken.

“As I mentioned on Tuesday, given the facts presented to us, we would have pursued this with the same sense of urgency and purpose,” he said.

“Upon learning of and seeing the noose, our initial reaction was to protect our driver.

“We’re living in a highly charged and emotional time. What we saw was a symbol of hate and was only present in one area of the garage, that of the 43 car of Bubba Wallace.

“Many of you have seen the photo. As you can see from the photo, the noose was real, as was our concern for Bubba.”

The statement which NASCAR released on Tuesday read, in part, “The FBI has completed its investigation at Talladega Superspeedway and determined that Bubba Wallace was not the target of a hate crime.

“The FBI report concludes, and photographic evidence confirms, that the garage door pull rope fashioned like a noose had been positioned there since as early as last fall.”

As well as the sensitivity training and surveillance, NASCAR will also update its code of conduct in light of the incident.

“Our ultimate conclusion for this investigation is to ensure that this never happens again; that no one walks by a noose without recognising the potential damage it can do,” explained Phelps.

“Moving forward, we’ll be conducting thorough sweeps of the garage area to ensure nothing like this happens again, and we are installing additional cameras in all of our garages.

“We will make any changes necessary to our sanctions and our code of conduct, and we will mandate that all members of our industry complete sensitivity and unconscious bias training.

“Going forward, our efforts are best spent on making sure every competitor feels safe, and every guest feels welcome.”

Phelps claims that NASCAR examined the garage areas of all 29 of the tracks it races at, finding 11 door pull ropes tied in knots out of 1684 garages in total, and only one knotted in a ‘noose’.

He also stated that the ‘noose’ was crafted at some point during the weekend of the Talladega race in October 2019, when the #21 Wood Brothers Racing car, driven then by Paul Menard, used the garage in question.

Wallace has been an outspoken figure during the recent heightened racial tensions in the United States.

However, Phelps himself took responsibility for the events which unfolded, claiming the driver and his Richard Petty Motorsports team “had nothing to do with this”.

“I will take full responsibility for that, and for the emotion that was attached to it,” said Phelps.

“Based on the evidence we had, we felt that one of our drivers had been threatened, a driver who had been extremely courageous in recent words and actions.

“It was our responsibility to react and investigate, and that’s exactly what we did.”

On suggestions that the incident was a hoax, he responded, “I just don’t know how people, frankly, think that way, and I’m not going to try to.

“But, I would say of (everything) that’s the most offensive to me.”

Given the conclusion that the person who tied the ‘noose’ cannot be identified, the investigation is now closed.

See below for timeline of events as released by NASCAR

Sunday, June 21
~ 4:30 p.m.: NASCAR alerted to the presence of the noose by member of No. 43 team. NASCAR security performs full sweep of the garage. Only the pull rope of the 43 team was discovered to be a noose; all the others were regular ropes.
~ 6 p.m.: NASCAR senior leadership meets, determines need for investigation and begins initial steps of the investigation.
~ 7:30 p.m.: NASCAR President Steve Phelps notifies Bubba Wallace of noose discovered in garage.
~ 10:40 p.m.: NASCAR releases statement after continuing to gather facts and further investigation.

Monday, June 22
– Early Monday a.m.: FBI Birmingham office reaches out to NASCAR.
~ 10 a.m.: FBI arrives at Talladega Superspeedway with 15 field agents to begin investigation. NASCAR provides the FBI with a list of personnel with access to the garage, as well as video and images taken from the weekend and the 2019 fall weekend as well.
– Over the course of the day: FBI interviews race team personnel from multiple teams, NASCAR officials, track, fire and safety personnel and track custodial staff. Talladega Superspeedway also provides the FBI with a list of events that had taken place since October 2019, which is when the new garages opened.
– End of the day: FBI reports interviews are complete for the day and the evidence at that point was inconclusive, with plans to continue its investigation the next morning.

Tuesday, June 23
– Early Tuesday a.m.: NASCAR receives additional video and provides it to the FBI. The video corroborated the testimony from one of the interviews the FBI had conducted earlier that the noose was present in that stall during the fall 2019 Cup event. The U.S. Attorney’s Office and the FBI informed NASCAR that their investigation had conclusively found this was not a hate crime.
– 4:10. p.m.: FBI releases statement indicating findings of investigation.
– 4:15 p.m.: After awaiting signal from the FBI, NASCAR releases statement on FBI investigation, with teleconference that follows.