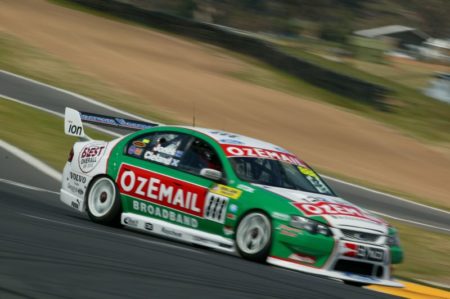 Bathurst 1000 runner-up John Cleland has explained why he came to have such a long relationship with Brad Jones Racing despite the lure of rival teams.

Cleland and Brad Jones finished a narrow second to Mark Skaife and Tony Longhurst in the Great Race in 2001, his first year with the Albury-based squad.

The Scot would go on to rack up five Bathurst 1000 starts with BJR, the same number he had with as many different (V8 Supercars/Australian Touring Car Championship) teams dating back to his debut in 1993.

A champion in British Touring Cars, Cleland also acquitted himself well in those 10 Mount Panorama V8 campaigns, picking up a total of three top 10 finishes with BJR and two with other outfits.

He fielded offers from the Walkinshaw-aligned Kmart Racing, which dominated in 2003 and won again in 2004, and Dick Johnson Racing, but the man who retained a ‘nine-to-five’ job as a car dealer even during his time in the BTCC preferred the more easy-going nature of BJR.

“I found it quite easy to go out there and get in those cars and drive them pretty quickly,” Cleland explained on the latest episode of the Rusty’s Garage podcast, out today on PodcastOne Australia.

“I can’t remember what year it was, but I had the option to drive for the Kmart team, Dick Johnson, or Kim’s team (Kim Jones, brother of Brad).

“The trouble with the Kmart and the Dick Johnson team was they wanted me to go out there for a couple of months to do Sandown 500 and then do Bathurst, and live the V8 life for two months while they tested and I got used to them.

“The two races were a month apart or whatever it was, and I just couldn’t afford that time away from my business or my family, really, because I’ve got four kids. They were older in those days, for sure, but to leave my wife and home and the business for two months probably wasn’t the right thing to do, where(as) with Kim, I could fly in, do Melbourne, fly out, and then fly back for Bathurst.”

The relationship has lasted beyond his time as a driver, with Cleland still regularly speaking to Kim Jones in particular.

“I speak to Kim every month, or something like that,” he added.

“It’s a while since I’ve spoken to Brad but Kim has been here and stayed with me at home over, I think it was New Year, and stuff like that. I even had him in a kilt once.

“I enjoyed that period of time and I can’t remember how many years I drove with them but it started in 2001 with Brad and we started 22nd, I think it was, on the grid, because the car just wouldn’t do anything right.

“But, in the morning warm up, I think it was wet and the car was fabulous, the car was just a rocketship, and we ended up coming second to Mark Skaife.

“I think we were two seconds behind Skaifey at the end of that race and right in front of Murphy, so to beat Murphy and come right behind Skaife, in that race where it had everything from hailstorms to sunshine to you name it and we survived it, was a pretty special time, and that was a great, great event for me.

“I loved the time that I got to know the Jones boys and they were good fun. Kim’s a good mate still; Brad, he’s a funny, funny bloke, and quite intense sometimes, but a funny bloke.”

The early-2000s was a particularly successful period in general for BJR on the mountain.

While Cleland backed up that second placing with a ninth with Andrew Jones in 2003 and a seventh with Dale Brede in 2005, Brad Jones got back onto the podium in 2004 when he and John Bowe combined for a third placing.