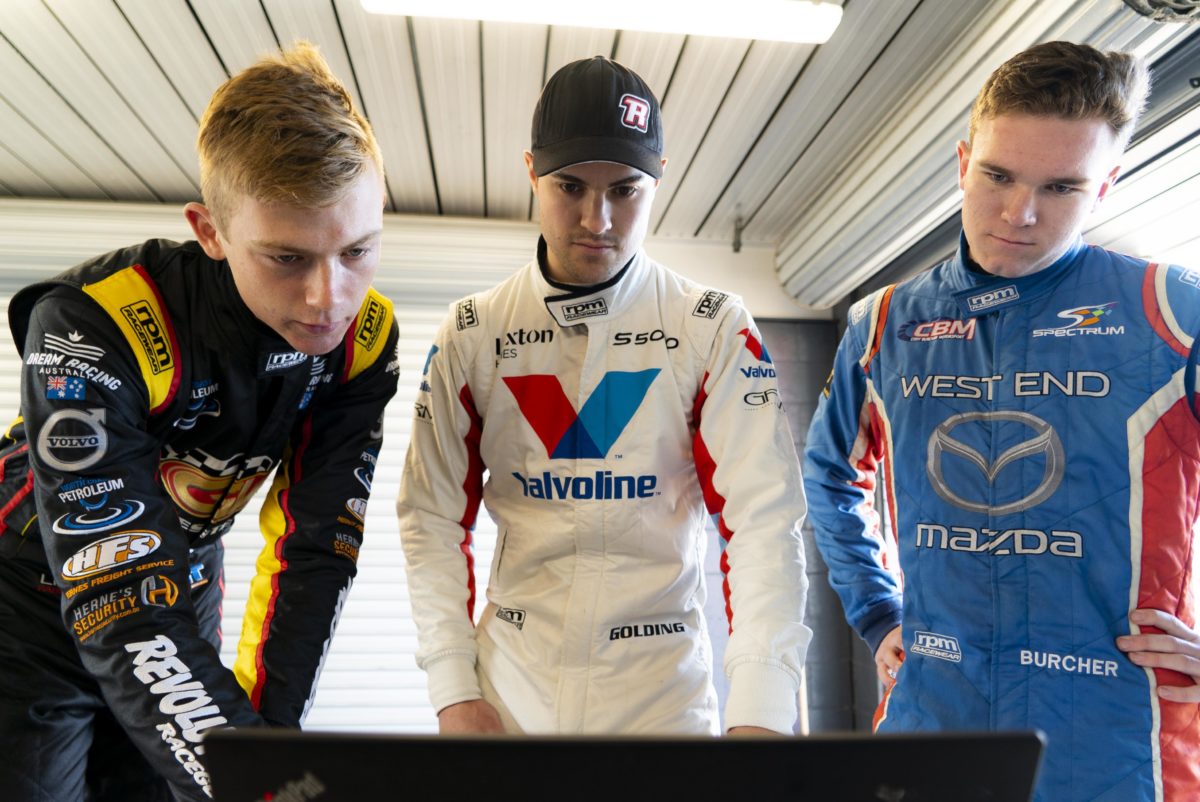 The trio were guided by James Golding for the first two sessions, when they followed the GRM racer around the circuit to developing an understanding of driving lines and techniques.

Thereafter, they were let loose to lap the Island on their own.

“My job for the day was to bring the rookies up to speed and answer any questions they have about the S5000 cars,” said Golding.

“I’ve been taking them out on track behind me so they can follow my lines and they all really enjoyed the day.

“They are awesome cars to drive but you really have to respect them and they’re slowly learning that throughout the day.”

Nathan Herne is a Trans-Am regular and likened the sensation of an S5000 to the tintop he would normally drive.

“They’re pretty cool, they’re like a Trans-Am but in an open-wheeler body,” said Herne.

“The S5000 is a rear-engined car so there was still a fair bit to get used to in terms of transferring the weight through the corners.

“The Trans-Ams really like to use the brakes hard in the mid-corner and get the weight transferred around but the S5000s require a smoother driving style, they don’t like to be flicked around but they’re good fun to drive.”

Burcher already had brief experience in an S5000 having tested earlier in the year, albeit at a vastly different circuit in the form of Winton.

“They are great cars to drive, obviously a handful with the massive amount of power and there was definitely a lot of fish-tailing out of the low speed corners,” said the Formula Ford driver.

“It’s credit to everyone who was involved in creating these cars, they are a weapon to drive and so much fun.

“This is the most powerful car I’ve ever driven. You drive out of the pits and as soon as you take off the pit limiter and it pushes you back further into the seat which is really cool.

“The power is the most standout part of the car and the top speed hitting over 290km/h down the front straight of Phillip Island.

“It’s awesome fun, definitely an eye opener and your reflexes have to be on point but once you get used to it, they’re phenomenal to drive and so much fun.”

Webster added, “I’ve never driven anything like this, so it’s been a great learning experience and it’s amazing how fast the car is and what you can do with the amount of aero grip it has.

“I’ve raced go karts and come out of Hyundai Excels and jumped into this S5000 open-wheeler car.

“A lot of things are different, it is more similar to a go-kart than an Excel but I’ve learnt the size of the tracks in Excels and how quick you can travel in a car but this has a lot more horsepower and weight added to it and the downforce is completely different to anything I have driven but I’m having fun learning it.”

Reef McCarthy was also in attendance but did not venture onto the track.

Jack Perkins did, however, drive an S5000 for the first time, getting 10 laps under his belt.

The 33-year-old will be part of the broadcast team for the Shannons Motorsport Australia Championships this year.

The VHT S5000 Australian Drivers’ Championship will be one of the key acts on that bill when its season commences at Sydney Motorsport Park on August 15-16.