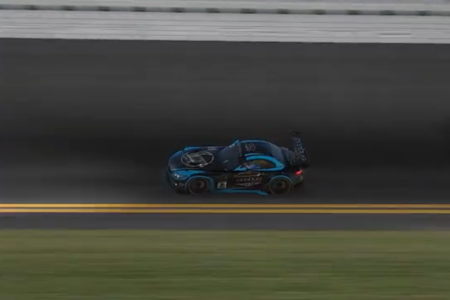 Jobe Stewart has cemented his place at the top of the Speedcafe.com GT3 Eseries, presented by Kincrome Tools with a decisive win in the penultimate round at the Daytona Road Course.

The Erebus Academy driver qualified his BMW Z4 GT3 fourth, but was able to fight his way past the Mercedes-AMG GT3 duo of Andre Heimgartner and Geoff Connell with moves at Turn 1.

He spent the remainder of the opening stint shadowing pole-sitter and early race leader Jackson Souslin Harlow (Audi R8), jumping ahead of Harlow during the first round of pit stops.

Harlow recaptured the lead from Stewart shortly before the Networkcafe.com.au Safety Car was deployed with around 54 minutes remaining. The caution period triggered another flurry of pit stops and critically, Harlow opted to fit fresh tyres and sacrifice track position while Stewart did not.

The race restarted with Stewart in an effective second position and Harlow outside the top 10. Stewart quickly disposed of Jordan Pruden’s McLaren before working to build a buffer over his pursuers.

With the pace advantage of his new tyres, Harlow was able to make up positions with ease and fought his way back up to second, but before he could reduce the margin to Stewart, he was collected by the Ferrari of James Foster at the Bus Stop Chicane, spinning him out of contention. Foster was penalised.

Geoff Connell (Mercedes) capitalised to finish second ahead of Jack Boyd (Audi), who recovered from an early spin to finish on the podium; Harlow was fourth from Pruden, Foster and Paul Auditore who continued his perfect streak of top 10 finishes.

Stewart said he was most nervous during the race’s early stages.

“It was pretty hairy for the first few laps, but after that I settled into a pretty good rhythm and went on to win,” he remarked.

“In the last round, my mindset will be just to take it easy and finish as high up as I can. It’s great to have the upper foot going into the final round and I’m hoping not to crash and at least finish in the top 10.”

Connell, a relative newcomer to sim racing, was elated with his first podium result for the series.

“We took a set of tyres at the first pit stop, knowing there was going to be a Safety Car after that to drag me back up to everyone.

Connell was thankful not to have been taken out in the incident between Harlow and Foster.

“It got the heart rate up – I was trying to push Jackson along and use him to catch Jobe and at the last second I saw Foster pull out down the inside,” he recounted.

“I dodged it, got out of his way, stayed on the brake and held my breath that I didn’t get run into.”

Heimgartner qualified third and ran in the lead pack during the opening stint, but his night ended with a spectacular somersault when he fired into the wall at Turn 6, just after the Safety Car period.

John Martin’s evening started on a sour note when he spun into the armco in the very first corner of the race, but he drove through the field to finish ninth.