The Brazilian driver is currently contesting his final ‘full-time’ drive in the NTT IndyCar Series, which comprises five oval races this season.

After 23 seasons competing across CART and IndyCar, the 45-year-old said he’s looking to continue driving elsewhere – including the Virgin Australia Supercars Championship.

Having raced in junior-level single-seaters in Europe in the early 1990s, Kanaan moved to the USA to race with Steve Horne’s Tasman Motorsports team.

Kanaan’s first season of the IndyCar feeder Indy Lights competition in 1996 saw him claim second place in the standings behind David Empringham of Canada.

However, a year later he won the title, claiming two wins and a further five podiums to beat fellow countryman Helio Castroneves to the title. In 1997, Kanaan stepped up to CART in what would be the final season for the team as Tasman Motorsports in IndyCar competition.

There he claimed two third-place finishes at Laguna Seca and on the streets of Houston on his way to ninth in the standings.

The team was then sold and became Forsythe Racing for the 1999 season with Horne still at the helm.

After a tough season, Kanaan left to join Mo Nunn Racing in 2000.

Eventually, Kanaan claimed his sole IndyCar Series success in 2004 for Andretti Green Racing and then won the Indianapolis 500 in 2013 with KV Racing.

“Steve is the one responsible for me coming to America,” said Kanaan.

“Steve, I call him boss, he is actually a father figure to me. I lost my dad when I was 13 years old.

“Steve is still a good friend, I talk to him on a daily basis.

“He made me. He gave me the opportunity in Indy Lights, pushed me to the limit, taught me everything I know about ovals because I knew nothing before I came here.

“We won the Indy Lights championship together, we moved to IndyCar together, I have to say Steve is my closest friend, boss, my forever boss, that I made in racing.

“Huge, huge figure in my career.”

Horne was also influential in the careers of Neil Crompton, who raced in the North American Touring Car Championship and also tested CART with Tasman Motorsports. 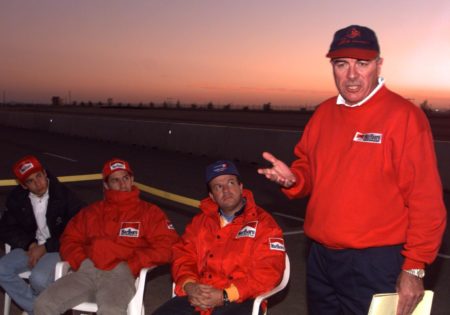 Greg Murphy’s ambitions to race in IndyCar were also aided by Horne, who tested the young New Zealander in Indy Lights.

Speaking on his career to date, Kanaan said joining Tasman Motorsports was one of his defining career highlights.

“It’s hard to pick one thing that I’m going to say ‘this was the biggest or the smallest (achievement)’,” said Kanaan.

“The highlight I would say, getting into Tasman, driving for the best team at the time in Indy Lights, finishing second the first year and winning the second year.

“Working with Steve Horne for five years was awesome.”

Horne joined the Supercars Commission in 2013 and spent four years as the chairman.

During his time on the Commission, Horne also investigated the possibility of using control engines in the Virgin Australia Supercars Championship.

Horne has since retired to Waiheke Island in New Zealand.

🇺🇸 97 was my 2nd year in Indy Lights and I knew I had to win the championship in order to graduate to CART. We had a new car for the season (Lola T97/20) and during the pre-season testing a part in the chassis tub pinched a nerve on my right leg that led into me having no control on pulling my foot back of the throttle. Pretty awkward. The first part of the season I raced with an elastic band pulling my foot back up… That really messed the start of the season for me, but I recovered, won two races and had a total of seven podiums. The last race of the season in Fontana was pure drama. I had a cut tire, fell back to last place but got back to the front pack and finished 9th, securing the Indy Lights Championship. • 🇧🇷 97 foi meu segundo ano na Indy Lights e eu sabia que tinha que vencer o campeonato pra subir pra CART. O carro era novo pra aquele ano e nos testes da pré-temporada uma parte de dentro do cockpit machucou um nervo da minha perna direita. Coisa louca, eu não tinha controle pra puxar meu pé pra cima, pra tirar do acelerador. Corri a primeira parte do campeonato com um elástico preso no meu pé… As primeiras corridas foram difíceis e isso bagunçou o início do meu campeonato, mas eu fui me recuperando, venci duas provas e tive um total de sete pódios. A última corrida do ano foi dramática… Tive um pneu furado que me jogou pra última posição. Consegui e voltar pro pelotão da frente, terminando em 9° e garantindo o título da Indy Lights. • #TKLastLap