Nick Percat says he’s mentally and physically the fittest he’s ever been following several weeks of “pure” kart training ahead of the Supercars season resumption.

During the coronavirus-induced pause in proceedings, Percat returned to his racing roots at some of Melbourne’s kart tracks with upwards of 1000 km in practice laps.

While the kart is a far cry from his Holden ZB Commodore, Percat said it’s ideal being physically tiring.

The kart also affords the opportunity to test and tune set-ups as the Brad Jones Racing driver would in Supercars.

“The go-kart is obviously is pure as it gets,” Percat told Speedcafe.com.

“To be honest, I’ve probably done eight days in it already once the kart tracks opened up.

“I’ve been doing two days a week minimum for the last three weeks.

“It’s been good. I think I’ve racked up close to 1000 kilometres in the kart in those eight days.

“I was doing as much as I can to get the body ready,” he added.

“I try and tune the go-kart to make it faster, to get my head thinking about how to make things go faster.

“Then just using the little sensors on the body again that have been probably sleeping through those 12 weeks.” 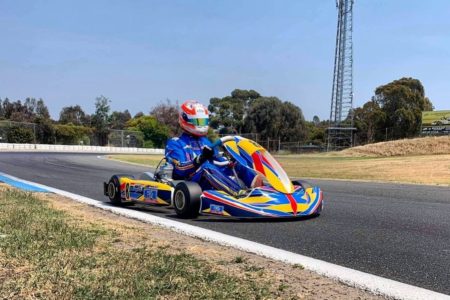 Percat in his kart

Percat’s on-track practice has also been dovetailed with an intense fitness regime with strength and conditioning personal trainer Heath Meldrum.

Prior to the coronavirus pandemic, Percat released a series of videos documenting his training programme.

The 31-year-old said he has no doubts he’ll be fighting fit when the championship gets back underway.

“All my training and prep kind of upped as soon as all the COVID stuff happened,” said Percat.

“I’ve used this gap as a time to do some different kinds of training, set some goals, and try and achieve a few PBs; be it running, or swimming, and cycling, and just general strength.

“It’s been really good with my trainer, Heath (Meldrum), we’ve treated it pretty much like a big training camp

“We’re smashing out as much as we possibly can to make sure that if they said, ‘We’re going racing tomorrow,’ there’s no issue there.

“I haven’t been sitting on the couch just doing nothing, it’s been as normal, to be honest, with a bit more downtime during the days.”

When the Virgin Australia Supercars Championship returns at Sydney Motorsport Park on June 27-28, it will have been three months since Percat last drove his Supercar.

His last outing was in the short practice and qualifying sessions at the ill-fated Melbourne 400, which was cut short after just one day due to COVID-19.

It’s been even longer since he’s had a race, that being at the Adelaide 500 on February 20-23 where he finished 22nd and seventh in the season-opener.

With significant karting kilometres under his belt, Percat believes the track time will put him in good stead for the season’s return.

“I’m a believer that the kart is very helpful, and some people might have chosen to spend a bit of money on their simulator and might have wished they’d bought a go-kart,” he said.

“For me, the sim thing was just fun, and I didn’t get caught up in it, and it didn’t change my driving style to suit a sim.

“I have the kart there to make sure I’m still feeling grip and all that kind of thing.

“I’m doing long race runs in the go-kart. I’m picking the hardest track I can go to in Victoria physically, and then just draining the fuel tank doing a session to try and get the body ready.

“If I didn’t have a go-kart I’d be finding one. I’ve even considered trying to buy a Hyundai Excel just to take to Sandown, they’re doing track days there on a weekend.

“I think you need to start hitting the ball again and get used to it. The go-kart for me is extremely valuable to make sure I’m ready to go.”

Percat said he’ll continue to cut laps in his kart ahead of the Supercars season resumption, which is just two weeks away.

The Virgin Australia Supercars Championship reconvenes with the Sydney SuperSprint on June 27-28.