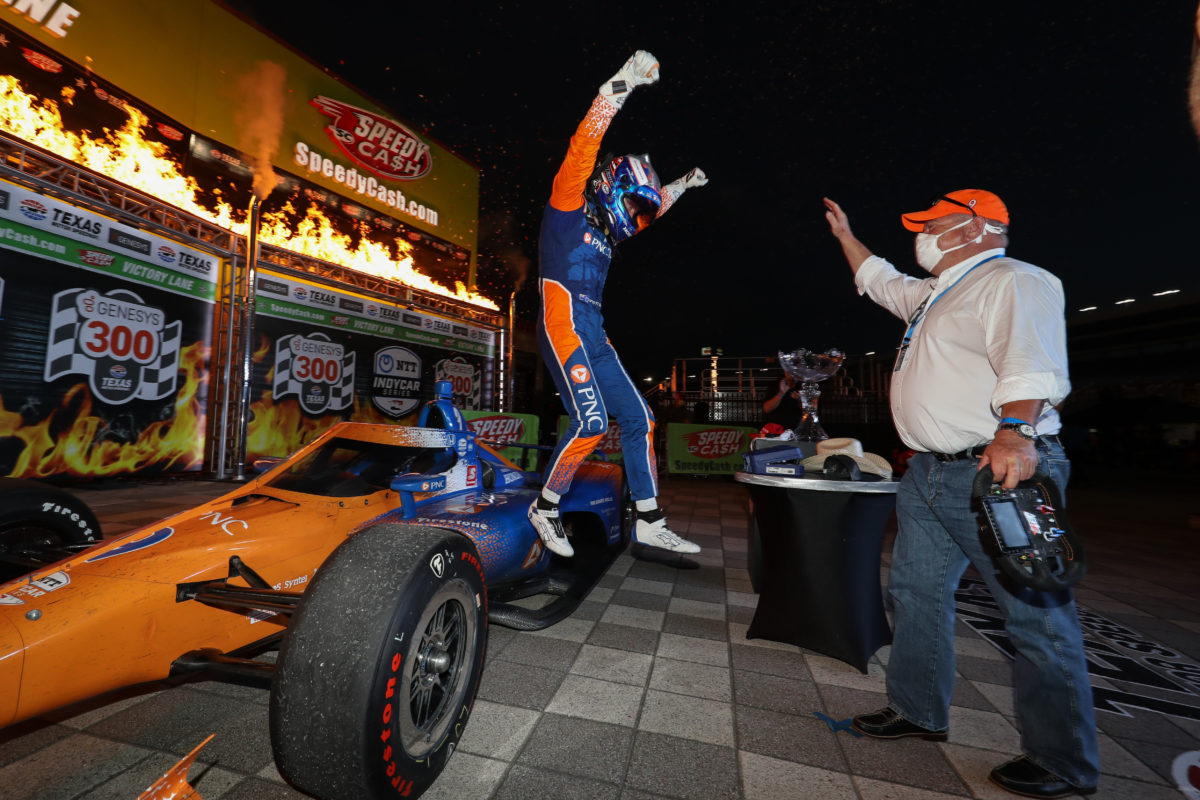 Scott Dixon says that comparisons between himself and IndyCar’s greats do not “ever really sink in” after he equalled one of AJ Foyt’s records with victory at Texas.

The result means that the New Zealander has now won at least one race in a total of 18 seasons in senior American open-wheeler racing, as Foyt did, and in 16 seasons in a row, his own record.

Dixon’s 47th victory (46 in IndyCar, one in CART) also consolidates his hold on third all-time on that metric, behind Foyt’s 67 and Mario Andretti’s 52.

In prevailing at Texas Motor Speedway, the Chip Ganassi Racing driver is best placed at this early stage to claim what would be a sixth title, one shy of Foyt’s benchmark.

Asked how being spoken about among such names felt, Dixon said, “It feels amazing, don’t get me wrong. I think we’re all in this business to win. With how tough the competition is, they come around a lot fewer than they used to.

“I think when you can pull it off, especially just how dominant the car was, it’s always nice. For me, to even be kind of listed with those names is amazing. It doesn’t ever really sink in to be honest.

“I feel very lucky and privileged to do what I do, to get to race with the best in the world. To still have AJ and Mario come to the track, I think that’s the coolest thing. And the Unsers, a lot of legends of the sport.

“I don’t know. I just feel lucky and very privileged to be with this team, able to come here and try to win races.”

While Car #9 was at one point more than 10 seconds clear of the field on merit, it was reeled in by Felix Rosenqvist in the sister #10 entry, which was less than a second back when the final pit stop cycle began.

Rosenqvist’s evening, however, ended with the black Ganassi car in the wall after the 2019 rookie lost control while trying to chase the leader through heavy traffic in the latter 10 laps.

“I knew the cars were very similar. I knew he was going to be tough,” said Dixon.

“I know Felix has been kind of sneaking up on the ovals a little bit more than the road courses and things like that, street courses, where he just naturally feels a lot more comfortable.

“But I knew these days would come where he’s going to be knocking on the door pretty hard. I feel bad for him.

“I don’t know exactly what happened there. I think he tried to pass around the outside, got caught up, got high, washed out into the wall.

“It’s a big NTT race for us here. I am sure they loved seeing the show he was putting on. He’s a great kid, a huge talent, is going to go a long way. Occasionally these things happen.”

The season-opener was crammed into a single-day owing to restrictions caused by COVID-19.

Dixon agreed that experience had paid dividends given only 80 minutes of practice was available to non-rookies ahead of their first race of the season, and first with the aeroscreen.

“I think knowing the process of the race, the tyres – even though those things can’t change a lot – you kind of have a pretty big memory bank of things that do and don’t work,” he explained.

“But, no, I think experience definitely helped. You saw some people I think early on make some mistakes pretty quickly that maybe necessarily if they’d done a few more races before we got to Texas, that wouldn’t have happened.”

Dixon’s series lead is 13 points over Texas runner-up Simon Pagenaud ahead of Race 2 on the Indianapolis road course on July 4 (local time).