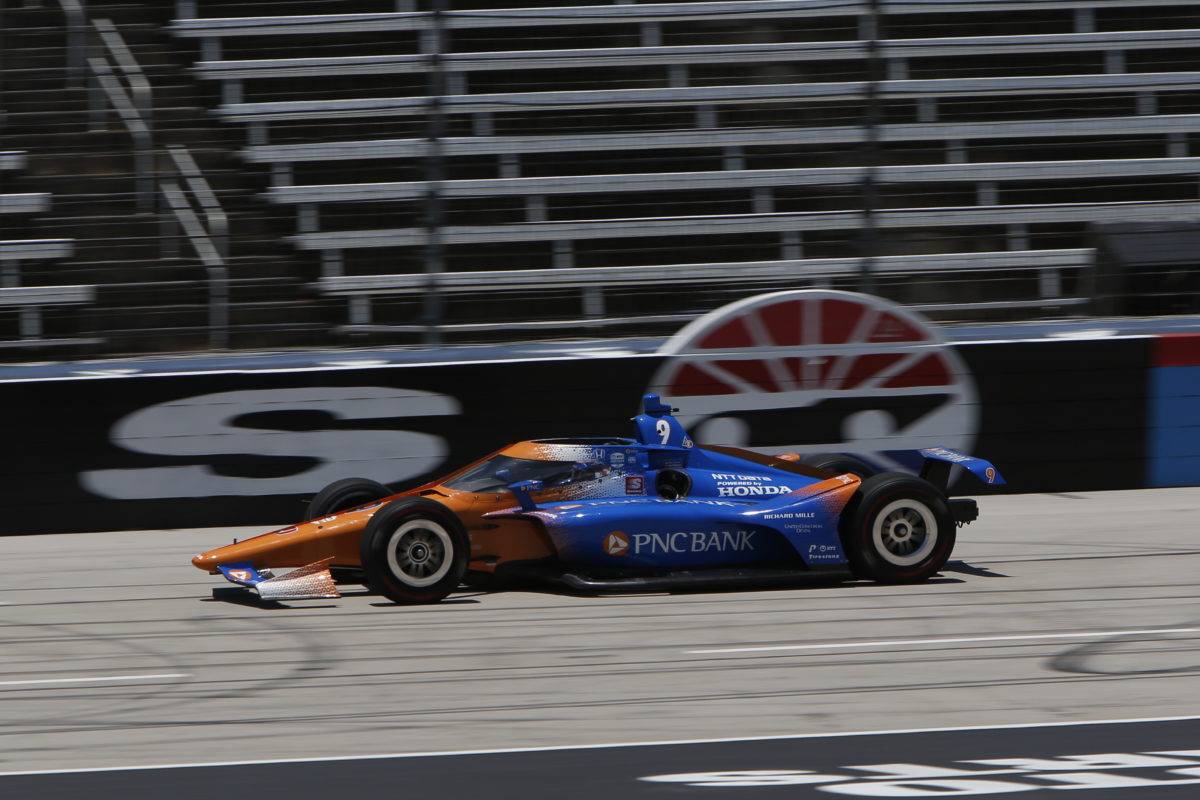 Scott Dixon has won Race 1 of the 2020 IndyCar Series at Texas Motor Speedway while Will Power finished a lap down in 13th.

Dixon led a total of 157 out of the 200 laps but was seriously threatened by Chip Ganassi Racing team-mate Felix Rosenqvist until the Swede came unstuck while trying to clear traffic on Lap 191.

That crash set up a three-lap sprint to the chequered flag but three lapped cars protected the race-leading New Zealander from Simon Pagenaud and Josef Newgarden.

Pagenaud took the chequered flag 4.4109s back from Dixon, with his Team Penske team-mate another 1.3955s in arrears.

Newgarden led from pole until he lost pace with a right-rear vibration in Car #1 and ceded the spot to Dixon, who started on the outside of the front row.

The Team Penske driver was into the lane shortly after, although just two laps shy of Lap 35, when the field was obliged to change tyres anyway.

The rest followed suit by such time, before a Caution was called on Lap 38 due to Rinus VeeKay losing control of his Ed Carpenter Racing machine and taking out fellow rookie Alex Palou (Dale Coyne Racing w/ Team Goh) in the process.

At that point, Dixon led Newgarden, Pagenaud continued to hold third. Rosenqvist was fourth, Veach fifth, and Power back in sixth having given up that spot to Charlie Kimball (AJ Foyt Racing) on Lap 2.

Dixon put almost seven seconds on Newgarden by the time they had 70 laps in the book, and just over 20 since the restart, as the 2019 champion continued to battle the vibration.

Pagenaud had been pressuring his fellow Penske driver but it was the Frenchman who soon lost a spot, to Rosenqvist, just before a Caution for debris on Lap 77.

Once everyone was able to pit under the yellow flag, however, Newgarden had jumped back in front, from Rosenqvist, Dixon, Pagenaud, Veach, and Kimball, while Power was 17th after a right-rear tyre issue.

Dixon wasted no time in passing Rosenqvist at the restart, rounding up Car #10 at Turn 1, then repeated the move on Newgarden four laps later.

The Penske driver continued to struggle, dropping position to Rosenqvist on Lap 118 and Pagenaud on Lap 119.

Up the front, another multi-time champion had extended his advantage to more than 10 seconds before a green flag pit cycle began at the Lap 120 mark.

The top four remained as you were and Kimball passed Veach for fifth very early into the next stint, then Newgarden for fourth at Turn 4 on Lap 127.

Veach rounded up Car #1 just a corner later but the Tennessean was able to hold out Conor Daly (Carlin) when he too tried to replicate the pass on Lap 131.

The margin between first and second had been trending downwards during that time, with less than two seconds between the #9 and #10 Ganassi cars when the fourth pit stop cycle began just past Lap 150.

Rosenqvist continued to enjoy a pace advantage over Dixon after the stops, although the leader’s cause was not helped by having the lapped Rossi in front of him for a brief period.

Dixon’s gap was not much more than half a second when Rosenqvist peeled off for his final pit stop on Lap 186.

Having found clean air, the New Zealander kept circulating until Lap 189 and while he rejoined in traffic, Rosenqvist remained second and was also surrounded by backmarkers.

That precipitated the Swede’s undoing, when he got loose on the outside of James Hinchcliffe (Andretti Autosport) at Turn 2 and spun into the wall.

While the Caution closed the gap between Dixon and Pagenaud, the traffic between them prevented any real challenge for the lead in the three laps which remained.

Veach, however, managed to nab fourth from Carpenter on the penultimate lap after the oval specialist had been attacking Newgarden for a place on the podium.

Daly got home in sixth, one spot up on Colton Herta (Andretti Harding Steinbrenner Autosport).

Ryan Hunter-Reay managed to dig himself out of a two-lap hole and finish eighth after the Andretti Autosport crew also had to make unapproved changes to his #28 Honda just before the start.

Oliver Askew (McLaren SP) and Tony Kanaan (AJ Foyt Racing) completed the top 10, and Kimball was 11th having stuck Car #4 in the wall on the final lap while hustling on fresh tyres.

Takuma Sato did not take the start after crashing his Rahal Letterman Lanigan Racing entry during qualifying.

Dixon will enjoy the series lead at least until July 4 (local time), when the second race of the season takes place on Indianapolis’ road course.