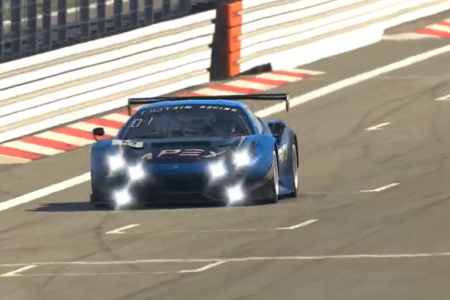 Jeremy Clarke has driven his Ferrari 488 GT3 to victory in a chaotic and unpredictable third round of the Speedcafe.com GT3 Eseries presented by Kincrome Tools at the Nurburgring.

Held on the full 25.3km, 170-turn Nordschleife layout, the two-hour race was punctuated by a couple of Safety Car interventions and incidents that claimed several leading contenders.

Starting fifth on the grid, Clarke ran inside the top five in the race’s early stages; rather than racing aggressively for track position, he adopted a conservative approach as he aimed to stay out of trouble.

“It’s about racing in the draft – there’s no point fighting to pass someone on a track that’s so draft-reliant and so critical to conserve fuel,” said Clarke.

However, his race almost went horribly wrong with 40 minutes to go when he fired across a kerb and grazed the armco.

“I was talking to one of my team-mates at the time, discussing strategy, and I just missed my braking marker and popped over the kerb,” he recounted.

“Fortunately, the damage wasn’t bad and I had to stop at the end of that lap anyway, so there was no harm done.”

Clarke was in sixth position when the second Competition Caution ended with 25 minutes to go, but immediately moved up a few positions when the leaders collided just after the restart.

Inside the final quarter of an hour, he dispensed of Richard Skender and fended off an attack from John Martin’s BMW Z4 to seal victory.

“I had to fuel save through the middle stint to get one extra lap of fuel; the carnage at the last restart definitely helped me gain a few positions,” explained Clarke.

“It was a hard battle with John at the end, which was really enjoyable.

“I was watching the relative times like a hawk in that last stint – there were some sectors where John was a lot quicker than me and there were certain areas where I knew I was quicker than him.

“I knew if I had about 1.5s when I got to the Carousel, he wouldn’t be close enough to draft past me.”

Martin finished in second place and was the highest-placed of the professional drivers. He was thrilled to finish on the podium after starting 18th on the grid.

“It was definitely an unexpected result that one, but it was good fun,” Martin said.

“It was all about trying to stay of trouble and survive. I hadn’t done a lap on the sim until qualifying, so it was a steep learning curve.

“I’ve driven the track in real life and like the other tracks, the iRacing version is absolutely spot-on. It’s something I’m still getting used to and I’m happy to be learning and improving.

“Dalton (Ellery) and the guys have put in a massive effort in the background to make the series as even as possible and the circuits we’re going to are really cool.

“Maybe I need to start further back more often – every time I qualify near the front, it turns into rubbish.”

A consistent and trouble-free performance yielded a podium finish for Kayne Thornhill in his Ferrari 488 GT3, ahead of Skender and Paul Auditore in their Mercedes-AMG GT3s.

The drivers left wondering what might have been included pole-sitter Dylan Birse – who ran in the lead pack early but copped a drive-through penalty for excessive weaving under the Safety Car and then retired with damage – and Blake Purdie.

Purdie dominated the first three quarters of the race and looked set to take a commanding victory, but made an error on cold tyres at the final restart and clouted the wall.

His incident also claimed the scalps of Trent Grubel and championship leader Jobe Stewart, who both crashed while attempting to avoid Purdie’s spinning BMW.

Stewart attempted to soldier on in his wounded car, but suffered further damage in a secondary incident and ultimately finished a lowly 19th.

The fourth round of the Speedcafe.com GT3 eSeries will be another two-hour race, held next Sunday evening at the famed Le Mans circuit.