WHERE ARE THEY NOW: Ross Dunkerton

WHERE ARE THEY NOW: Ross Dunkerton 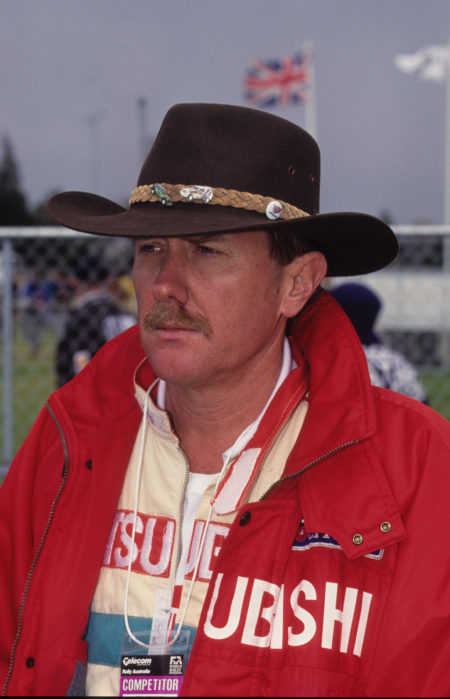 If you apply the name association game in Australian rallying, a driver which pops up near the top of the list is the mercurial Ross Dunkerton.

His efforts were only surpassed by the late Kiwi Possum Bourne who nabbed seven consecutive titles for Subaru from 1996.

A native of Western Australia, Dunkerton moved his family to Cairns in 2007 where he continues to enjoy retirement with wife Lisa and sons Aaron and Flynn.

The 74-year-old nailed his quintet of national championships in Datsun machinery that included 240Z and 260Z (twice) coupes, a Stanza and a 1600.

His fiercest rivals from those days included the Hungarian expat George Fury who successfully mixed rallying with his competitive days behind the wheel of a Group C Bluebird in the Australian Touring Car Championship ahead of the arrival of Group A from 1985.

“And of course waiting in the wings, Geoff Portman (1981, 1982 Australian champion) was always there ready to pounce if I put a wheel wrong.

“But then later on when I joined Mitsubishi it was Ed Ordynski (1990 Australian champion and perennial winner in Group N at Australian WRC level).

“It is a bit like F1, when someone isn’t performing there was always someone there to take your place.

“There were so many years where there were drivers looking over your shoulder and you just had to be on the ball all the time.”

Following the heady results with Datsun, Dunkerton teamed up with Ford with the highlight being the 1987 Malaysian Rally Championship when he wrestled a Laser TX3.

“I was with Ford for about four years and it was the same kind of pressure with other drivers lurking in the shadows so you had to perform.

“And as I mentioned with Mitsubishi there was always somebody there waiting for a chance for me to fall ill or break a leg or something.”

“But that is motorsport or sport everywhere.”

Rallying personifies the fine art of competition driving under extreme and variable conditions which also magnifies the ‘motor racing is dangerous’ mantra.

Dunkerton ruled the roost in the 1970s when safety was a far cry from the advanced technology today. 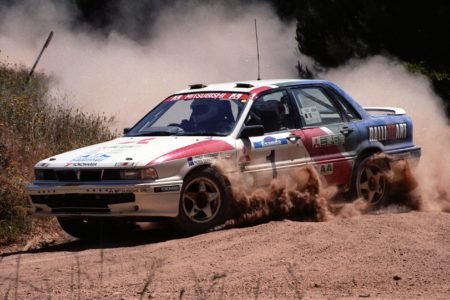 Contemporary active and passive measures where roll cages and driver safety gear including the HANS device can often save a competitor from what would have been in many cases a fatal accident in past eras.

As with many racing disciplines, there is no correlation between safety in rallying in contemporary times to several decades ago.

In fact Dunkerton and co-driver Jeff Beaumont stand as the crew to win the last running of the Southern Cross Rally in 1980 in a Datsun Stanza.

“When I got the Works drive with Datsun in 1976 I think I finished fourth in the Southern Cross, then I finished third and then second and I ended winning in ‘80 and that was the end of them,” Dunkerton recounted.

“The Southern Cross rallies were an incredible experience. There was a river crossing near Bellingen in Northern New South Wales and it was always at night and there would be thousands of people at the crossing.

“It was huge as it was all lit up and pretty bloody spectacular.

“One of the Southern Cross stages was over 200km in length.

“At the halfway point which was on top of a mountain you would organise to put four tyres up there the day before, you (driver) and the co-driver had to change the tyres.

“And it wasn’t a service break. It was all part of the stage. 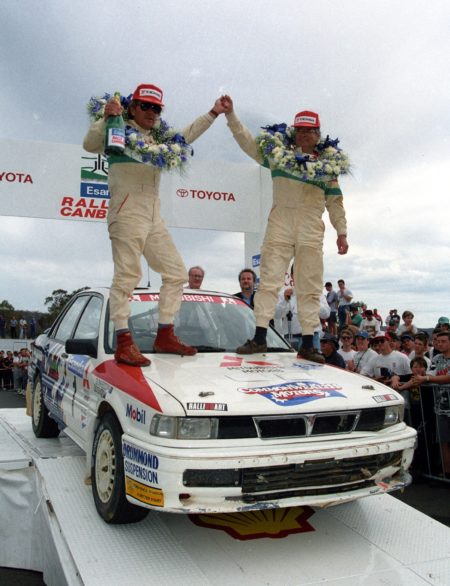 “They are great memories and when I think back on those days I was very fortunate to be part of it.”

In 2006 Dunkerton won the Targa West tarmac rally in WA which became immersed in notoriety when the great Peter Brock lost his life after the touring car legend slammed into a tree in his Daytona Coupe.

Dunkerton recounts his thoughts and feelings of that tragic Friday at Gidgegannup, 40km north-east of Perth.

“There were about eight or nine factors I believe that contributed to that but if one of those factors were taken out Peter would still be alive,” Dunkerton says.

“I won the rally but I have no trouble admitting that if Brocky had got to the finish I would have been second.

“It was just a tragic accident and I know exactly the corner it happened. I think I recced that stage about 18 times. There were two corners that I noted and the one that Brock crashed on was the second one I noted.

“It was off-camber, downhill and to set the scene it was raining as well.

“Just so terribly tragic to lose Peter in that event. He was really confident that he was going to win it.

“It’s a dangerous game we play. Especially tarmac. If it was gravel he probably could have gotten away with it.”

In more lighter moments, Dunkerton recalled the time of the Total Oils Economy run which ran over courses in Sydney and then to Melbourne between 1976 to 1980. It provided the motor industry with a guide to what fuel consumption could be achieved in an ‘economical’ manner.

“They had a driver and co-driver and a cop in the back seat to make sure you didn’t cheat,” Dunkerton began.

“Anyway one year my co-driver was the one and only Dennis Lillee (Australian fast bowling legend). I’m waiting on the start line and he hadn’t turned up.

“Anyway at the last minute a taxi pulls up and he got out nursing his head after having a massive night.

“Lillee jumped in and said, ‘mate I can’t do this’. So I said to the copper, ‘can you help read the instructions’?

“The cop jumped in the front seat and read the route instructions while Lillee went to sleep on the back seat.

“A little while later after we got going, we finally coaxed Lillee into the front seat. I happened to have a Playboy magazine which I gave to the copper to ‘read’ as he returned to the back seat.

“The idea was that once we got to the mountain stages I could knock it out of gear and free-wheel down the hill without the cop knowing because he would be too busy flicking through the mag,” Dunkerton laughed.

Now fully settled into the Tropical North Queensland lifestyle, Dunkerton has no regrets about pulling up stumps from his home state in the west.

“I’ve basically gone from one remote place to another. To go and do an event now, it is two days towing from up in Cairns.

“Motorsport is not as strong up here as it is in WA but in 2018, we were fortunate to have Targa Australia add Cairns to its national tarmac championship calendar.

“I competed in that in 2018 and last year when Targa Great Barrier Reef returned I did it again and my two sons Aaron and Flynn also drove in it.

“It was nice to have the boys compete except that Aaron was knocking me off on the first two days,” Dunkerton laughed.

“It still prefer the gravel but it’s just the maintenance on the cars which is huge. With these tarmac events you just come home and give it a wash and put it in the shed.

“With a gravel car you have to replace this, replace that and it’s a hell of a lot of work.”

Like many, Dunkerton is eager to get behind the wheel again for Targa Great Barrier Reef later this year, if the contagion that has held the world to ransom is controlled and allows normal services to resume.

“As with many things, it’s still up in the air if Targa Great Barrier Reef will run this year. It’s scheduled for September 4-6 so we will have to see if the world comes back to normal by then,” he said. 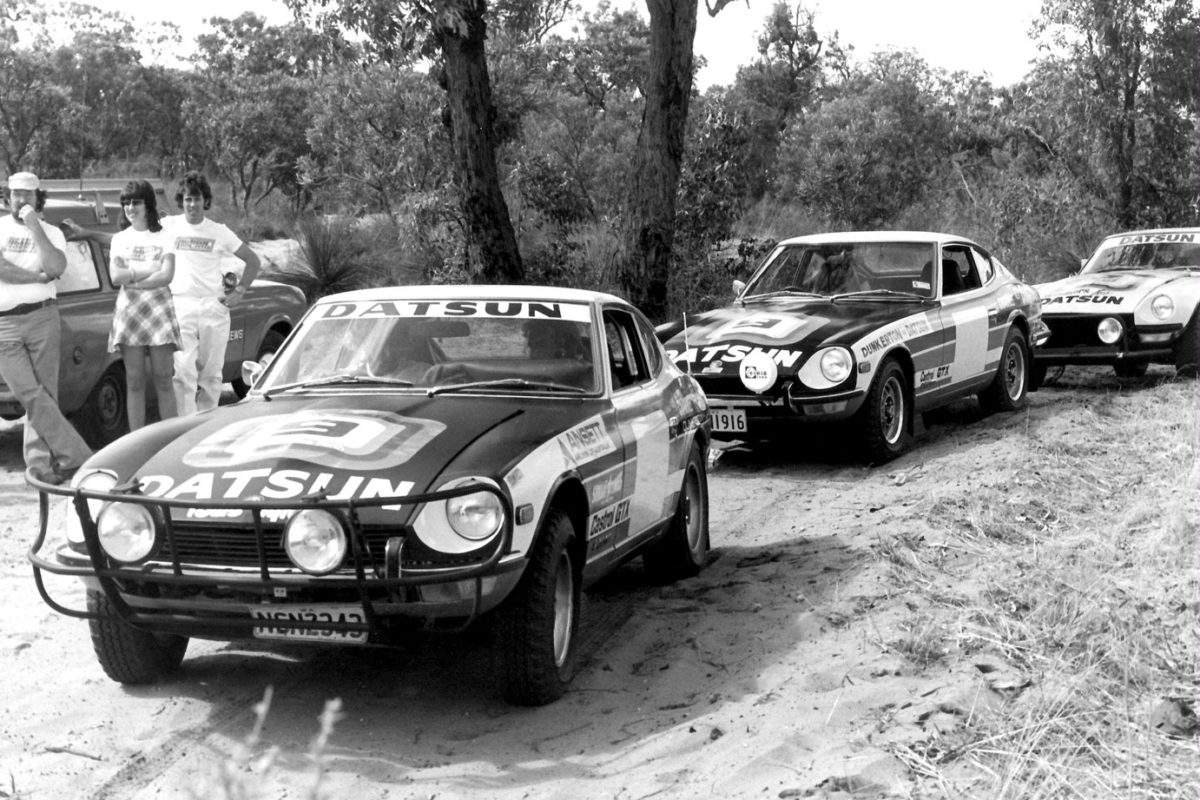