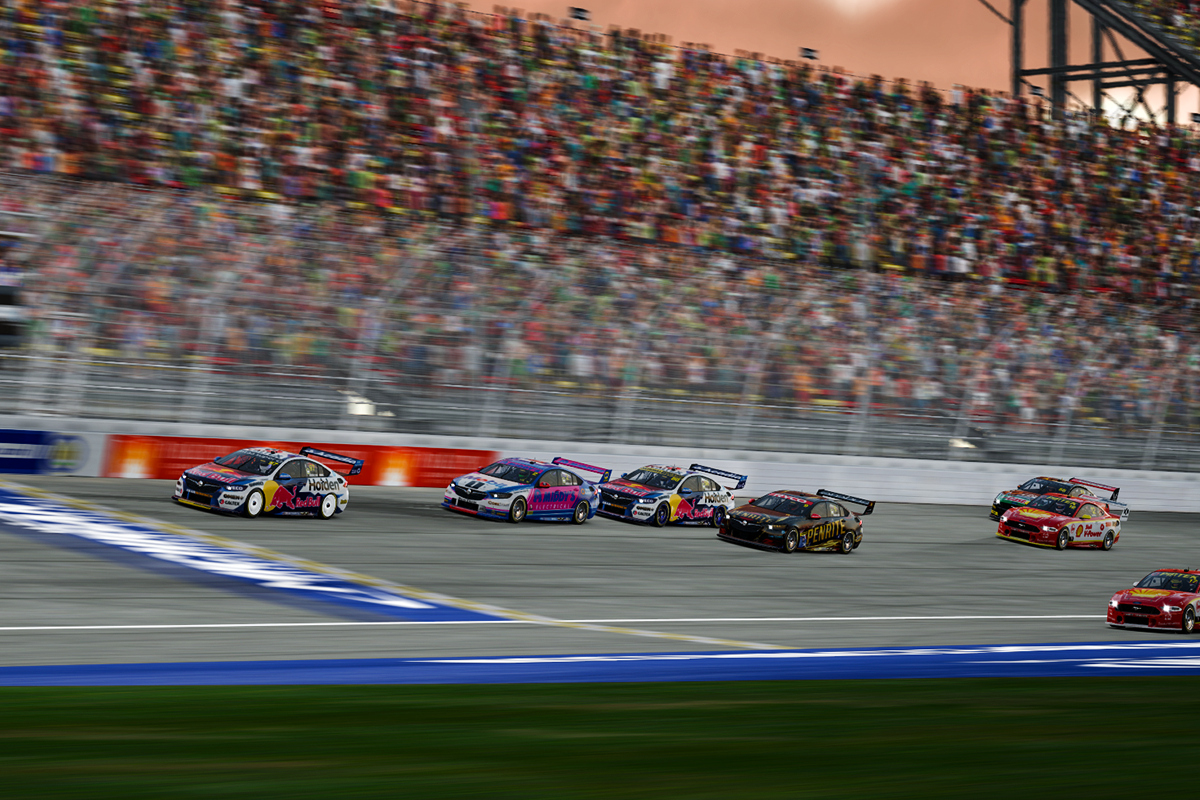 Shane van Gisbergen has continued to dominate the BP Supercars All Stars Eseries with come-from-behind wins in Race 27 and Race 28 at Michigan International Speedway.

The Red Bull Holden Racing Team driver was a contender early on in Race 27 before he was caught up in an incident with Macauley Jones.

That dropped him to 13th, however, he managed to recover to contend for the win on the final lap and surge past Anton De Pasquale and Scott McLaughlin.

Race 28 saw van Gisbergen start from last and largely avoid the carnage to lead late in the race and fend off a charge from Walkinshaw Andretti United driver Bryce Fullwood who claimed second ahead of Scott McLaughlin.

Van Gisbergen led the field into Turn 1 but soon had two-time Supercars champion McLaughlin on his outside.

Chaos kicked off at the end of Lap 1 when Todd Hazelwood came to blows with Matt Stone Racing’s Jake Kostecki.

The pair collided and speared into the outside wall. Walkinshaw Andretti United driver Chaz Mostert was a victim of the melee and fell to the rear of the field.

That sent the pair spinning and caught several more drivers out in the process.

As a result, van Gisbergen dropped to 13th.

The battle for the lead was still fought between McLaughlin and De Pasquale.

As the race hit halfway, still it was McLaughlin that led De Pasquale. Fullwood climbed to third with Super2 Series wildcard Jordan Boys in fourth.

Despite the early race incident, van Gisbergen climbed into the top 10 and soon found himself just off the back of the leading pack.

Fullwood from fifth was the first to blink and pit on Lap 19 for his compulsory pit stop.

Once the pit stop sequence was completed it was McLaughlin who still led De Pasquale with a handy lead over the rest of the field.

The top two split themselves from the rest of the field in the pit stop cycle, however, van Gisbergen soon cracked the podium and began to catch the leading pair.

With the tow, van Gisbergen caught the leaders and wen three-wide down the back straight.

With the race results of Race 27 reversed, the grid for Race 28 saw Kelly lead the field to the green flag.

Having led the race early on, Kelly fell back through the field. Castrol racers Lundgaard and Kelly came to blows, sending the pair spinning on Lap 3.

Kostecki was the next victim on Lap 4 following contact with Caruso and spun to the infield.

Whincup held the advantage in the early proceedings, following by Reynolds, Caruso, Waters, and Davison.

Caruso was taken out of the picture on Lap 7 and only moments later Hazelwood was sent spinning as well.

Having started from second-to-last, McLaughlin fought through to fifth on Lap 8. However, a collision with David Reynolds sent the Kiwi into the path of Will Davison.

Kelly spun and several more got caught out in the incident, including both McLaughlin and van Gisbergen.

The Safety Car was deployed on Lap 11 with Waters at the head of the field.

Waters, who led the field, opted not to come into the pit lane while the rest of the field came in, however, a lap later, and Waters pitted.

Whincup led the field to green with Coulthard in tow.

Soon enough, Heimgartner went to the lead after Whincup went high but by the end of the first green-flag lap, it was Fullwood that led.

Whincup made contact with Fullwood on Lap 18 and spun, collecting Heimgartner, Pye, Percat, and Kelly in the process.

With 10 laps to go, it was van Gisbergen who had fought through to the lead ahead of McLaughlin, Coulthard, Fullwood, and Reynolds.

As the field came to the start/finish line to start the final lap, Fullwood put pressure on van Gisbergen for the win.

He sought to make a move but lost ground to the Kiwi. Ultimately, he had to fend off an attack from Reynolds and McLaughlin, settling for second.

Race 29 of the BP Supercars All Stars Eseries concludes Round 9 at Michigan International Speedway.