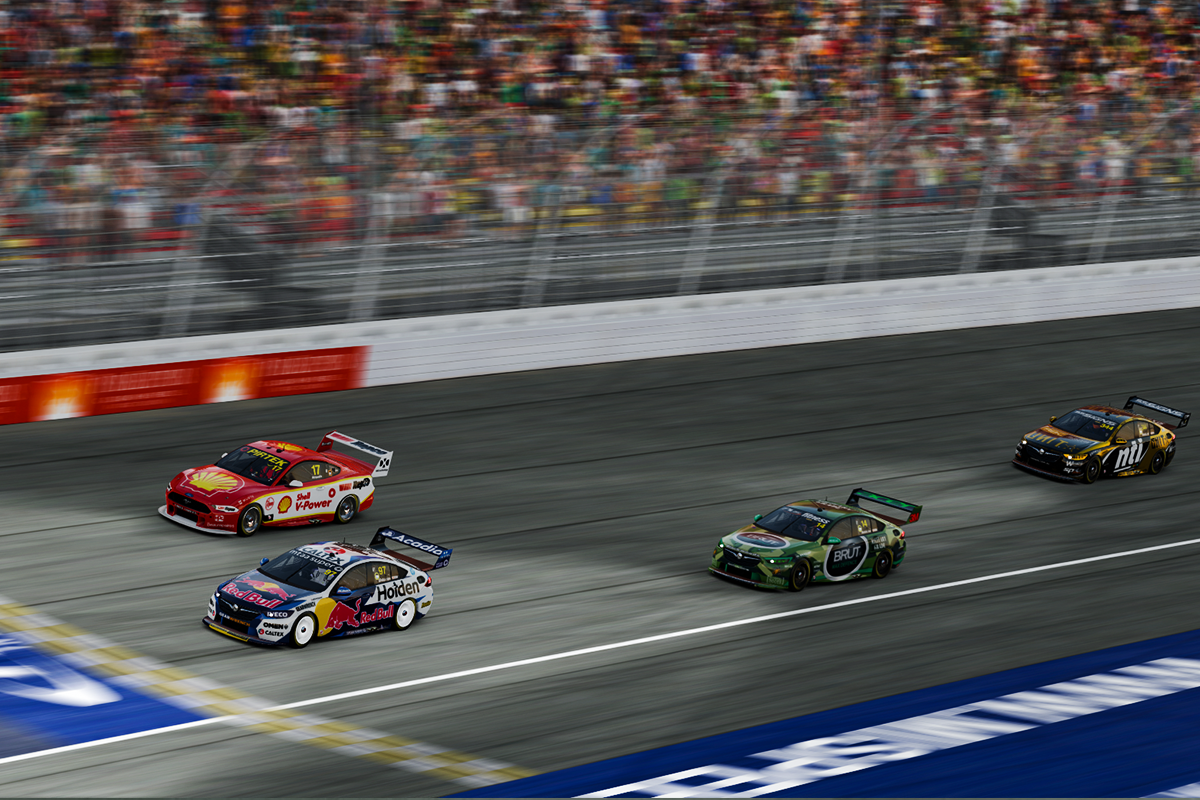 Shane Van Gisbergen will start Race 27 of the BP Supercars All Stars Eseries from pole position after winning Duel 1 at Michigan International Speedway.

James Courtney was an early victim in the 15-lap race and spun before the start/finish line.

Van Gisbergen led into Turn 1 as the field fanned out behind him.

He had support from Holdsworth and Le Brocq on the low line while McLaughlin led the high line with Kostecki and Nick Percat in tow.

Drama struck on Lap 2 when Le Brocq and Percat made contact and the pair went spinning into the wall.

Alex Davison, Rick Kelly, and Garry Jacobson were victims in the incident.

McLaughlin went to the lead on Lap 2 with support from Goddard. However, the bump draft unsettled McLaughlin into Turn 1 on Lap 4.

That gave van Gisbergen the advantage and the lead, however, McLaughlin was back into the fold with the slipstream.

The Brad Jones Racing driver went to the apron and the inside of van Gisbergen on Lap 7, but that slowed his speed through the first turn.

McLaughlin led van Gisbergen at the start of the final lap.

Holdsworth slid past van Gisbergen on the back straight and then went to outside of McLaughlin. However, he slid up the track and lost momentum.

Through the final corner, it was van Gisbergen who had a slim margin over McLaughlin.

Holdsworth got the draft but as he came down the track he collided with Hazelwood and spun on approach to the chequered flag.

Mostert started Duel 2 from pole position with Reynolds alongside him. His team-mate De Pasquale was third with Zane Goddard in fourth.

Mostert got the jump on the field into Turn 1 but was quickly caught by Reynolds and by Turn 3 the Penrite racer took the lead.

Heimgartner went spinning on Lap 5 after he came across the nose of Walkinshaw Andretti United’s Bryce Fullwood.

Monster Energy Racing driver Cameron Waters soon made his way into the mix and fought to the front to contend with Mostert.

Meanwhile, Reynolds began to fall back toward the back end of the top 10.

With three laps to go, it was still Mostert who led, albeit, only by half a car length over De Pasquale.

With two laps left, Coulthard slapped the wall and fell outside the top 10.

As the field came to the start/finish line to start the final lap it was Mostert who led Waters.

Into the final sweeper, Jones shot to the lead on the low line with Mostert in the middle and De Pasquale up high.

In a drag race to the finish, De Pasquale narrowly edged out Jones.

In third was Mostert, Fullwood, Boys, Waters, Goddard, Mark Winterbottom, Coulthard, and Aaron Seton the last of the top 10 runners.

The finishing order from Duel 1 set the inside row for Race 27 while Dual 2 set the outside row.

Race 27 of the BP Supercars All Stars Eseries gets underway at 19:00 AEST.