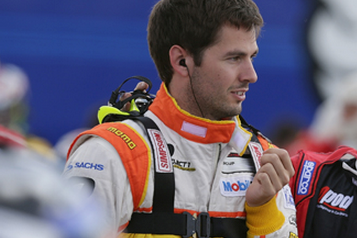 Craig Baird has opened up about a chance moment just prior to the crash which tragically took the life of Porsche Supercup star Sean Edwards.

Edwards was in the passenger seat of an ex-Carrera Cup car when its brakes failed, causing the vehicle to hit the barriers head-on at Turn 6 of Queensland Raceway in October 2013.

The 26-year-old Briton was killed on impact while driver Will Holzheimer suffered horrific injuries but survived.

Baird had sought to have Edwards placed in the Porsche Carrera Cup Australia field for a cameo at the Supercheap Auto Bathurst 1000 event earlier that month.

When that deal did not come to fruition, the Carrera Cup champion invited his fellow Porsche racer to work with him at a drive day in Queensland Raceway.

Baird has now revealed that it was he who was to have been instructing Holzheimer on that run, but fate was to have it that Edwards took his place.

“He was having to go to, I think, Abu Dhabi or Dubai to do some Supercup testing,” explained the New Zealander on the latest episode of PodcastOne Australia’s Rusty’s Garage podcast, released today.

“He said, ‘Mate, I’m heading that way anyway, I’ll come down and I’ll still do those days.’

“I had some personal dramas in my life at that time, especially that day and over that weekend, and for whatever reason I had never…

“I would normally get to the track on a drive day and get dressed, get ready, (and) introduce myself to the clients.

“It was one of my old Cup Cars, and I was asked if I could jump in the passenger seat; it was as simple as that.

“I wasn’t ready and sadly, or however you put it, Sean put his hand up and said, ‘Hey buddy, I know you’ve got a few dramas going on at the moment; I’m all dressed, I’ll jump in and go,’ and that’s the last time I spoke to him.”

A coroner found in 2016 that the incident was caused by an unknown mechanical failure and that there was nothing either Edwards or Holzheimer could have done to stop the car leaving the track.

Continuing to reflect on the situation, Baird remarked, “People say, ‘Oh, there’s karma in life…’, ‘There’s this in life, there’s that…’

“I think sometimes – I said it before – you draw a number when you’re born, maybe, and it wasn’t my day.”

Edwards had led the Porsche Supercup series with just a double-header round remaining at the Yas Marina Circuit in the following November, having won three races already in that season.

He had also claimed outright victory in both the 24 Hours of Dubai and Nurburgring 24 Hours in 2013.

The coronial findings included that bodies such as CAMS (now Motorsport Australia) “should work together to develop guidelines for driver coaching and recreational activities conducted on race tracks in Queensland, such that individuals who provide venues for, organise and participate in these activities are appropriately informed about the risks involved and how to make these activities as safe as possible,” and that Porsche be informed about the incident (if not already) to determine if the incident was a one-off or the result of a more inherent shortcoming.

Queensland Raceway was the subject of a CAMS licence at that time, although the drive day itself was not a CAMS activity.