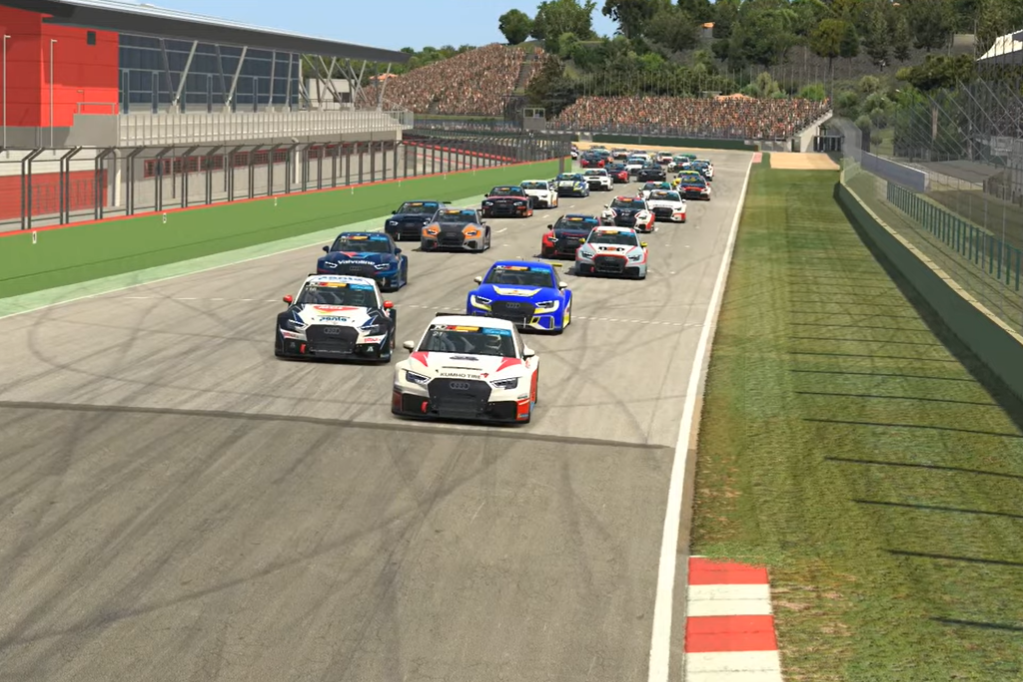 Harley Haber leads the field away in the TCR race

Harley Haber has stretched his lead in the ARG eSport Cup with a win and second placing in the penultimate round at Imola.

The V8 Touring Car driver is 37 points clear at the top of the standings with just the two-driver endurance race at Mount Panorama remaining, next week.

Haber started from pole for the opening race at Imola, in the Audi TCR cars, and saw off minor early pressure from the likes of James Golding, Cody Burcher, Ash Sutton, and Jaden Ransley.

Thereafter, he pulled away and took the chequered flag six seconds up on the field.

“The tow is quite powerful around here, there’s a few decent straights where you can get a bit of a gain,” explained Haber.

“So even if you pull away in the corners, within two seconds you’ll get a tow and it bought the boys closer and closer. But it was good to break that gap at the end and after that I was just driving away.”

Burcher was in the battle for second until he ran wide and dropped outside the top 10, leaving Golding, Sutton, and Ransley to continue the fight.

Sutton ended up claiming the spot after Golding incurred a slow-down on the penultimate lap, but the Garry Rogers Motorsport S5000 driver staved off Ransley for third.

The night’s Formula 3 encounter went the way of Sutton, meaning he sits 55 points off the top of the table with one round to go.

The British Touring Car Championship driver swapped the lead several times with Burcher before a mid-race touch at Tamburello put the latter out of contention with damage.

Sutton’s margin at the finish was eight seconds over Haber, with Jordan Cox well back in third.

Ransley holds second in the standings on the way to Round 10 of 10 at Bathurst next Thursday (June 4).