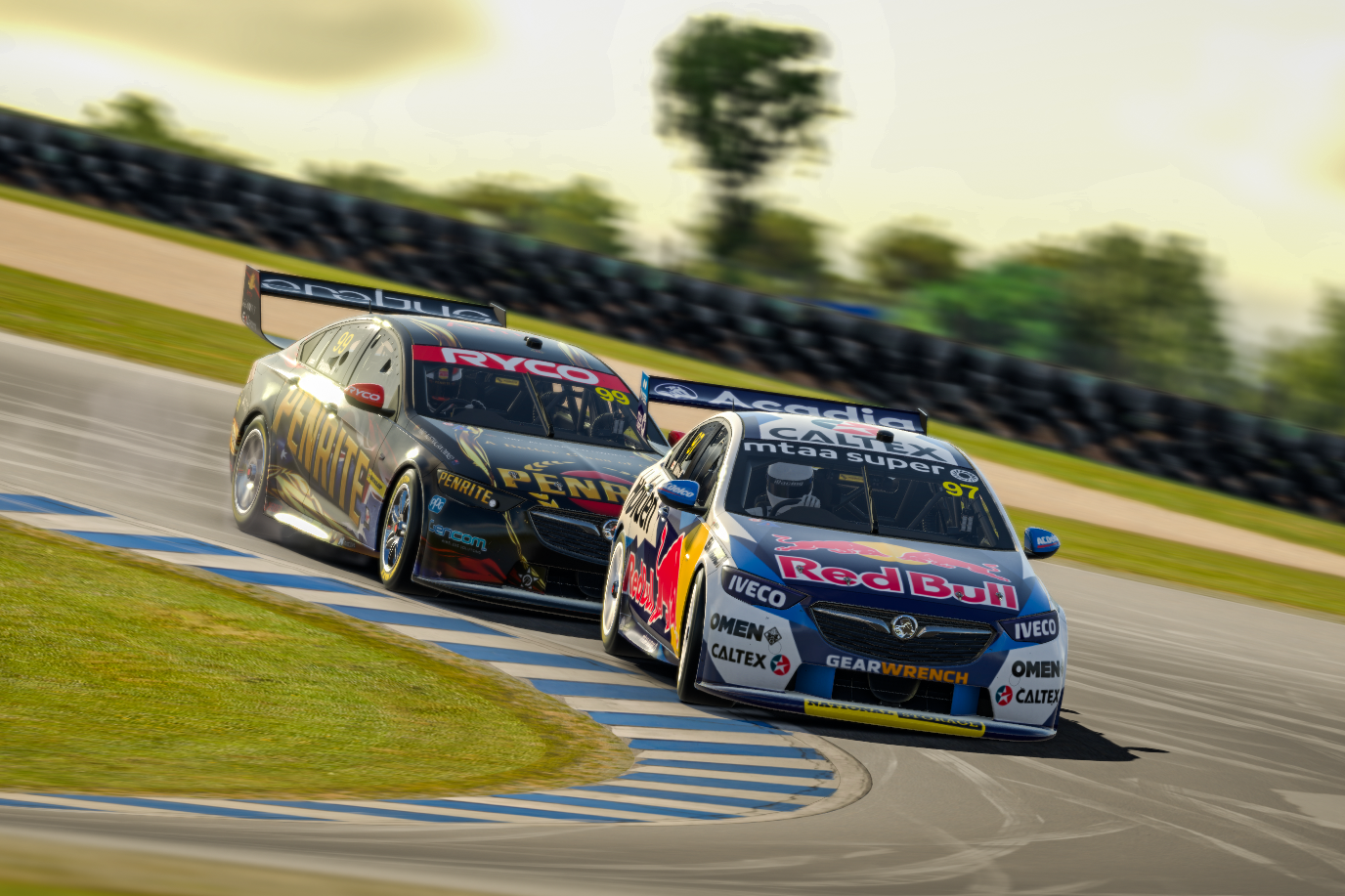 The Eseries leader held off an attack from Anton De Pasquale of Penrite Racing who pitted late in the race to surge forward in the closing stages.

Fawzan El-Nabi started from pole position, but contact with Scott McLaughlin of the Shell V-Power Racing Team resulted in a drive-through penalty for the wildcard. The pair finished 16th and ninth respectively.

It was a slow getaway for El-Nabi who plummeted down the order before the field reached Turn 1.

That handed the advantage to van Gisbergen who went on the defensive as De Pasquale sought to make an attack.

However, De Pasquale suffered understeer through Turn 1 and went off onto the grass.

As a result, he fell to fourth just ahead of team-mate David Reynolds. A side-by-side run with Holdsworth through Hay Shed didn’t pay dividends, and De Pasquale got shuffled out to sixth place.

At the end of Lap 1, it was van Gisbergen who led Mostert, Holdsworth, Reynolds, and De Pasquale.

Drama struck on Lap 2 when Coulthard got loose through Turn 3 and speared off the road on approach to the Turn 4 hairpin.

He got on the grass and clipped both Fullwood and Heimgartner who were innocent victims in the melee. The trio duly pitted with damage.

Having lost ground at the start of the race, El-Nabi pitted at the end of Lap 2 to take his compulsory pit stop.

McLaughlin followed suit on Lap 4 and came out just ahead of El-Nabi who made the most of the undercut from a fresher set of tyres.

Mostert made his stop on Lap 5 and van Gisbergen came in a lap later. The benefit of the undercut allowed Mostert to leapfrog van Gisbergen and take the effective lead of the race.

Come Lap 7, van Gisbergen managed to usurp Mostert and take back the lead of the race at the Turn 4 hairpin.

Once the pit stop sequence cycled through it was van Gisbergen who led Mostert, De Pasquale, McLaughlin and El-Nabi.

There were dramas for the McLaughlin on Lap 8 when El-Nabi contacted the back of the former Eseries leader and sent the Kiwi into a spin on approach to Turn 4.

As a result, McLaughlin plummeted down the order to 14th and El-Nabi was duly given a drive-through penalty.

With McLaughlin out of the way, Holdsworth moved to fifth, Waters to sixth, and Will Davison to seventh. The top 10 was completed by Le Brocq, Jake Kostecki, and Todd Hazelwood.

As El-Nabi came to the pit lane, Reynolds climbed into the top 10.

Having made a late race pit stop, De Pasquale make a charge in the dying stages of the race and usurped Mostert.

He was soon hustling to get by van Gisbergen and as the last lap began, the pair were split by just a few car lengths.

Despite his best efforts, De Pasquale couldn’t find a way through and had to settle for second.