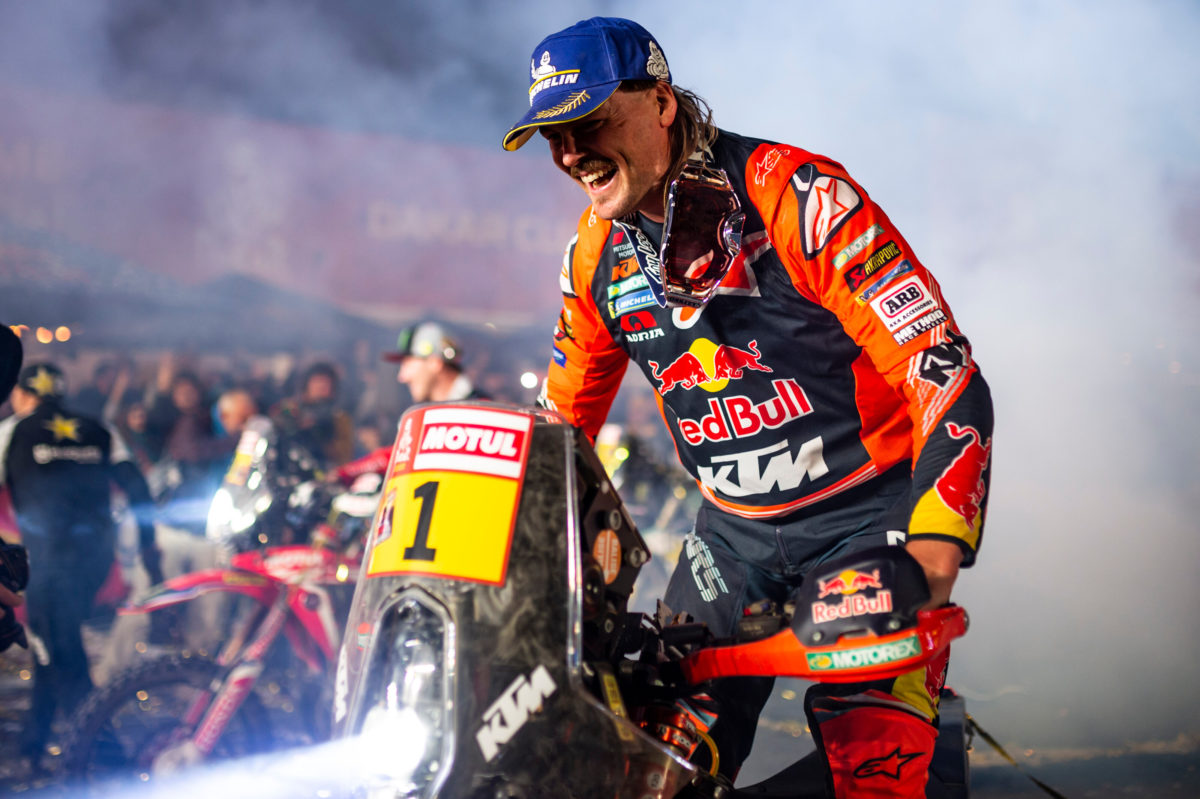 Toby Price has revealed his ambition to race in the Supercheap Auto Bathurst 1000 after getting a taste in the virtual world earlier this month.

The two-time Dakar champion on a KTM motorcycle was an entrant in the BP Supercars Eseries Celebrity Race and has won races in the SuperUtes Series in a Mitsubishi, for which he is an ambassador.

While he has already signalled a desire to prolong his offroad career with an eventual switch to four-wheel competition at Dakar, Price also has eyes on more events at Mount Panorama.

“The real deal (Bathurst) race would be another one on the bucket list for sure to do,” said Price in a Motorsport Australia video interview.

“The simulator race didn’t quite go to plan for us. I made it entertaining; I laid on my roof for about two laps and the boys were losing it, laughing at me and whatnot.

“I’ve been stirring up Chad Reed a little bit, saying, ‘Hey, we need to see if we can get into the real deal game at Bathurst 1000 one year.’

“Along the way, you’ve always just got to add a little bit of trash talk and a bit of fun with it, but it (Eseries) was a good, fun event, and I’ve now got my own simulator at the shop.

“I’ve been practicing at night, so I’m getting ready for my next one…

“Whenever I get that call-up… Hopefully Roland Dane will give me a call-up and I’ll be ready to go.”

Price and Dane’s Triple Eight Race Engineering team do share a common sponsor in Red Bull, and the Banyo-based operation did field an Xbox One-backed wildcard entry in the 2013 Supercheap Auto Bathurst 1000 for Mattias Ekstrom and Andy Priaulx.

However, the 32-year-old could still be a while away from racing a Supercar.

He estimates that he has “four, maybe five good years” left in offroad motorcycle racing, and, despite coming close to winning the Finke Desert Race in a trophy truck, noted that a genuine switch of discipline to cars could take that long to achieve.

“A lot of people at the moment give me a little bit of slack about moving to four wheels but the four-wheel program doesn’t come easy,” explained Price.

“There are lot of guys that can drive cars and there are not very many seats available. It’s exactly the same thing as a motorcycle.

“I didn’t just land on a Dakar ride overnight; it is a four- or five-year plan, so I’m just trying to start on it a little early, just to get that driving time under the belt.

“Any bit of experience is going to help and we go from there.”

With Finke, which would have been held next month on the Queen’s Birthday long weekend, cancelled for 2020, Price is currently sidelined from competition.

He advised that there are moves to try and hold two rounds of the FIM Cross-Country Rallies World Championship, which he won in 2018, in October and November.