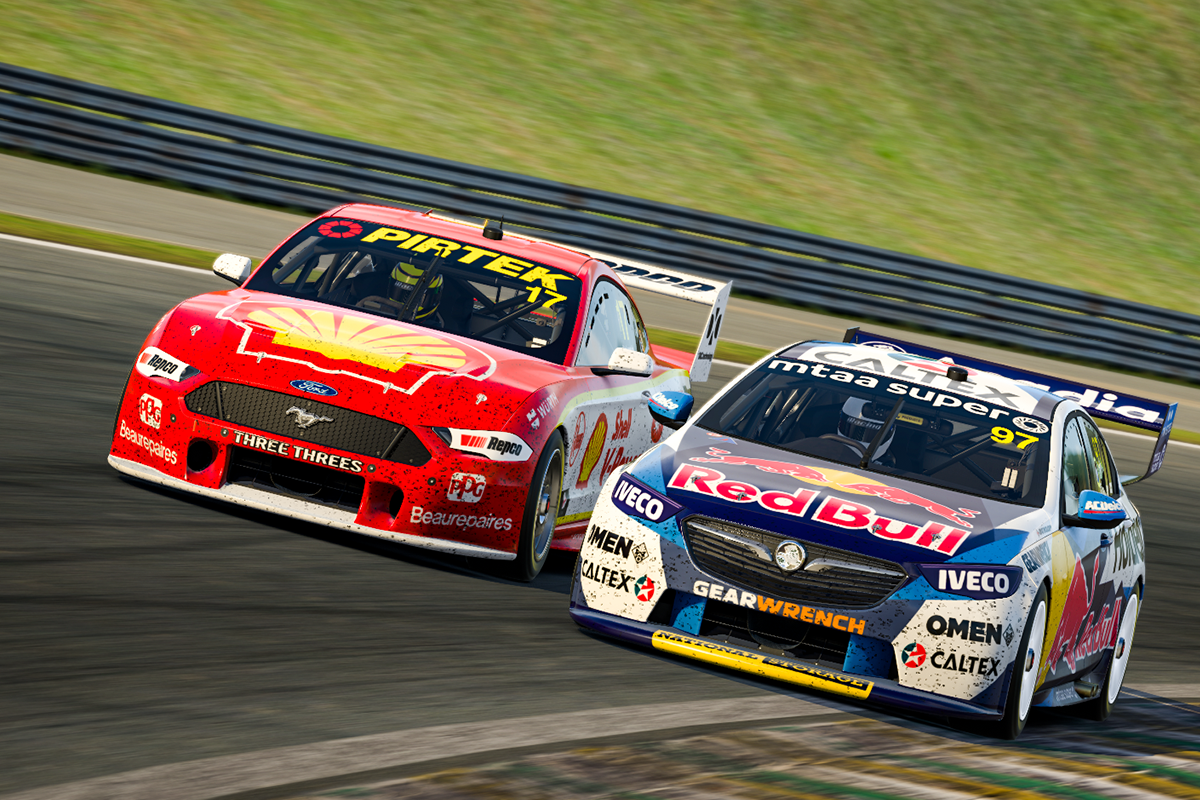 Anton De Pasquale and Shane van Gisbergen have shared the spoils at Interlagos in Round 8 of the BP Supercars All Stars Eseries.

Having won the night’s opening race at Phillip Island, van Gisbergen claimed round honours and with it a $1000 donation to Wings For Life.

Race 25 of the Eseries saw De Pasquale edge out wildcard Fawzan El-Nabi while van Gisbergen completed the podium in third.

Race 26, the final race of the evening, saw van Gisbergen come out on top, avoiding the carnage and making a late race pass on Scott McLaughlin to score the win.

In what was a relatively drama-free race, De Pasquale pitted midway through the race, returned to the lead, and extended the gap to get another Eseries win.

De Pasquale’s race nearly came undone on the first lap after contact on the run down to Turn 1 between he and van Gisbergen.

As the pair jockeyed for ascendancy, they both hit each other and went into the adjacent concrete wall. Fortunately, the drivers managed to carry on relatively unscathed.

Just behind them, McLaughlin got turned around after contact with Mostert. Alex Davison was another victim of the Turn 1 melee as he got spun around too.

De Pasquale edged away from the field through the first few corners and left van Gisbergen to battle with El-Nabi who demoted the Red Bull racer at Bico do Pato.

At the end of Lap 1, van Gisbergen pitted from third on the road and fell to 26th.

David Reynolds locked his rear wheels into Turn 1 and spun on his own but caught Jamie Whincup in the process.

Come Lap 3, Mostert was handed a drive-through penalty for the race start contact that sent McLaughlin into a spin.

Having established a handy lead initially, De Pasquale fell into the clutches of El-Nabi on Lap 4.

At the end of the lap, El-Nabi pitted as he went side-by-side with De Pasquale over the crest onto the front straight.

On the re-join, van Gisbergen got ahead of El-Nabi. However, it wasn’t long before the wildcard made his way through.

De Pasquale pitted on Lap 5 and returned to the race in the effective lead, just ahead of El-Nabi.

Once the pit stop sequence cycled through it was De Pasquale that led El-Nabi, van Gisbergen, Waters, and Coulthard.

In the end, De Pasquale managed to extend his margin over El-Nabi to claim the win. The podium was completed by van Gisbergen.

Van Gisbergen made it two wins from three races in Round 8 of the BP Supercars All Stars Eseries with a trouble-free run to the chequered flag.

A late race pit stop gave him fresher tyres and the ability to dispatch McLaughlin to steal the lead and the race win.

With the results of Race 25 flipped to set the grid, James Courtney inherited pole position for the final race of the night alongside Garry Jacobson.

Courtney got the holeshot into Turn 1. In what was a relatively clean start, Jack Smith managed to come out the other side of Turn 3 with the lead.

There was drama at Turn 4 when Courtney and Heimgartner made contact. Courtney spun, hit the tyre wall, and came back into the field.

Crash strewn cars scattered across the grass and the Safety Car was quickly deployed.

Heimgartner led at the end of Lap 1 ahead of Smith and Reynolds. McLaughlin made headway to 11th while van Gisbergen was 15th, De Pasquale 17th.

The majority of the field came to the pit lane to complete their first pit stop under Safety Car.

Meanwhile, Heimgartner, Kelly and a handful more opted not to pit.

The first car on the road having pitted was Smith in sixth.

Heimgartner led the field to the green flag on Lap 4.

It wasn’t long before drama struck again, this time Le Brocq getting into the back of Smith and sending the Super2 Series graduate into the concrete wall on the approach to Turn 4.

Moments later, Bryce Fullwood lost control of his car and spun in front of McLaughlin. Le Brocq hit Fullwood and Whincup clipped the WAU driver too.

Down in sixth, Golding was the effective leader as the first driver to have completed a pit stop.

He completed his second stop on Lap 7, still, Heimgartner and Kelly stayed out without having made a pit stop.

Heimgartner came to the pit lane as the halfway mark approached, which gave McLaughlin the lead of the race with Mostert and van Gisbergen in tow.

McLaughlin surrendered the lead on Lap 12 with his second pit stop.

Golding, who was the effective leader of the race, was usurped by McLaughlin on Lap 13 into Turn 1.

Come Lap 14, van Gisbergen pitted and returned to the race behind Mostert. However, it wasn’t long before van Gisbergen passed Mostert to make it a Kiwi one-two.

With the order corrected it was McLaughlin from van Gisbergen, Mostert, Golding, Waters, De Pasquale, Coulthard, Hazelwood, El-Nabi, and Goddard.

The new tyre advantage allowed van GIsbergen to challenge McLaughlin as they crossed the line to begin Lap 17.

Side-by-side they went through the S do Senna, down the straight, and into Turn 4. Finally, van Gisbergen cleared his fellow countryman.

In a time-certain finish, van Gisbergen beat McLaughlin by half a second with Mostert the last of the podium runners.

Round 9 of the BP Supercars All Stars Eseries takes place on June 3 at 18:00 AEST.