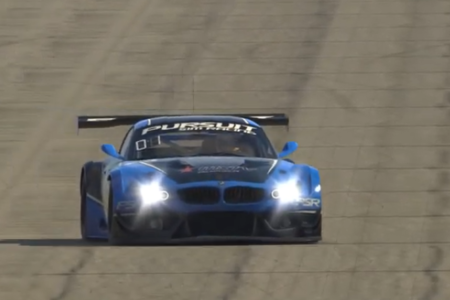 Jobe Stewart has defeated some highly-credentialled professional racing drivers to win Round 1 of the Speedcafe.com GT3 Eseries, presented by Kincrome Tools on the Indianapolis road course.

Starting third on the grid, the Mount Gambier driver moved his Pursuit Sim Racing BMW Z4 GT3 up to second at the start and put a move on pole-sitter Craig Edwards at the beginning of the third lap to take the lead.

From there, pit stop shuffle aside, he was never headed for the remainder of the 90-minute race, and ultimately took the win by over seven seconds from Jackson Souslin Harlow.

Unlike Souslin Harlow and a few others, Stewart elected not to change tyres during his one and only pit stop of the race, but was still able to keep his rivals at bay with a sequence of fast lap times after the second and final appearance of the Networkcafe.com.au Safety Car with just over 20 minutes to go.

“It was tight with fuel – my pit stop was right on the edge of the window, so I had to fuel-save a fair bit.

“Changing tyres takes a fair bit of time in the GT cars, so I thought it would best not to change them; it worked out in the end.”

Stewart receives a Kincrome portable automotive toolkit as his prize for winning the round.

Second-placed Souslin Harlow (Altus eSports Audi R8) elected to change tyres during his pit stop, but the advantage of the fresh rubber didn’t become noticeable until the last 20 minutes, when he was able to make up several positions.

“The last couple of rounds I hadn’t been taking tyres, but I thought here it would be a good idea with the fast, flowing corners,” Souslin Harlow said.

“I think P2 was probably the best result we could have achieved tonight; the Audi didn’t seem as strong as the BMW and we were struggling in a straight line.

“I made a couple of silly mistakes with slow-down penalties for cutting the track, which was frustrating, but P2 isn’t too bad.

“At the end, I wasn’t going to sit there – I wanted to make up as many spots as I could so I took a few risks and bombed it in, fortunately there wasn’t any contact.”

Third place, and best of the professional drivers, was Andre Heimgartner in his Mercedes-AMG GT3 after a consistent performance.

“There were a few different strategies tonight, and all sorts of stuff we could have done, but we decided just to go with the one stop,” Heimgartner said.

“I was a bit worried when the last Safety Car came out, because we had to hang on a lot towards the end, but I had some good battles.

“To be involved in a series like this where it’s run well and the racing is clean, it’s very enjoyable.”

Shane van Gisbergen fell outside the top 10 with an early spin, but recovered strongly and was challenging for a podium late in the race.

However, he made contact with Luiz Paulo Gallon’s Ferrari which sent Paulo Gallon into a spin; van Gisbergen was deemed to be at fault for the incident and was handed a drive-through penalty, dropping him to 13th.

It was also a night to forget for the polesitter Craig Edwards, who lost time with a crash entering the pits and then copped a drive-through for a clash with Reece Cohen before ultimately retiring from the race.

Round 2 of the Speedcafe.com GT3 Eseries, presented by Kincrome Tools will be held at Belgium’s Spa-Francorchamps circuit next Sunday evening.