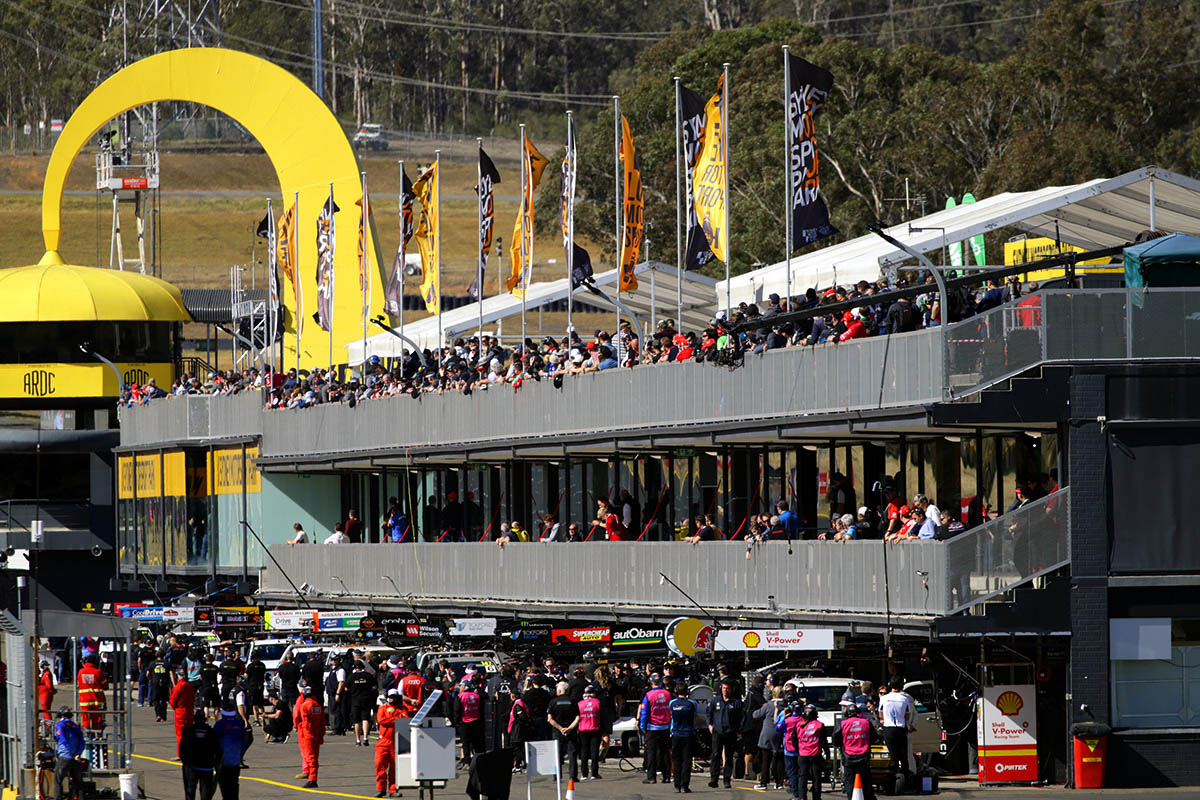 With the Virgin Australia Supercars Championship set to restart at Sydney Motorsport Park, CEO Sean Seamer has explained how the season will resume amid a global pandemic.

Supercars will limit how many team members can attend, which is understood to be around 13 individuals per two-car team, including drivers.

Throughout the coronavirus pandemic, Supercars CEO Sean Seamer has earmarked a sub-500 figure for personnel on-site.

That was brought about during the early phase of the pandemic in March, which saw the Federal Government announce mass gatherings of more than 500 people were to be cancelled.

As government guidelines continue to shift, Supercars has begun working on a person-per-square-metre plan.

An exact number has not yet been confirmed, but based on the 13 people per two cars, 156 team members will be able to attend.

Supercars will then limit the amount of additional personnel that can attend, which includes its own administration, officialdom, and television crews.

Supercars CEO Sean Seamer will not attend and team owners are unlikely as the category works on a ‘minimal viable product’ basis.

Media personnel outside Supercars’ television operations will not attend and it’s understood just one photographer is likely to capture the landmark event.

As previously announced, spectators will not be allowed in, however, there are efforts being made to have spectators watch the racing from their cars.

With the majority of teams based either in Victoria or Queensland, Supercars will charter flights out of Melbourne and Brisbane.

The teams will then stay at a hotel across the road from Sydney Motorsport Park.

During the race weekend, the teams will be confined to the circuit or the hotel.

Australian Racing Drivers’ Club CEO Glenn Matthews said a collaborative effort between Supercars and the circuit will make the running of the event as painless as possible.

Part of that is working with its caterers to feed the teams that will be staying nearby.

“We’ve submitted plans to them in terms of procedures and social distancing.

“We’ve worked with them really closely and even small things, for example, like feeding the teams.

“Our catering partner VenuesLive have been supplying food to the people that have been in isolation in hotels in the city.

“They’re across all of that. Our cleaners are COVID-certified as well. We’ve been able to work with Supercars and work together.”

During a recent media roundtable teleconference, Seamer outlined the logistics involved with adhering to the State and Federal Government guidelines.

“So the way that we’re working is to make sure that we are adhering to workplace guidelines around headcount per square meter,” said Seamer.

“That includes the pit garages, the TV trucks, everywhere, as well as minimizing our footprint across the whole of Sydney Motorsport Park.

“That reverses out to a maximum headcount, but we’re still working through the final numbers as we start to have discussions with final medical and other COVID compliant requirements for the event.

“If we can take race control, for example, you will have core race control there, but the stewards will operate remotely.

“We’ll have a minimal commentary team onsite with additional productions for offsite.

“We’re working on the basis of a minimum viable product for that first event at Sydney Motorsport Park,” Seamer added.

“It’s important that operationally we follow and stick to the strict restrictions that could still be in place at that point in time.

“We’ve been working very collaboratively with the government and each state on a state by state basis as every sport has.

“We’re confident that our restart protocols are in line with government, both state and medical advice.

“We’ve been working very closely with Motorsport Australia to put protocols together to give us a high level of confidence, otherwise we wouldn’t be announcing the event in the calendar today.

This week there has been a push by State Governments to ease restrictions on interstate travel.

Currently there are no interstate restrictions between Victoria and New South Wales.

Under the Queensland Government guidelines, “Entry into Queensland is only permitted to persons who are eligible for an exemption.

“People intending to travel across the border are encouraged to apply for a Queensland Entry Pass to avoid delays at the border.”

Seamer said Supercars has been working in conjunction with the Queensland Government and is encouraged by the easing of restrictions.

“We’ve been working with Queensland Government on our protocols for racing,” he said.

“Obviously, they’ve been working with all sports around what they need to do.

“When we look at the glide path on the restrictions easing, and based on the feedback that we’ve had from all of our state partners, we’re comfortable with the (Sydney) date.”

Seamer is hopeful that more people will be able to attend the following round at Winton Motor Raceway with fewer restrictions.

The Virgin Australia Supercars Championship resumes at Sydney Motorsport Park on June 27-28. It then moves to Winton Motor Raceway on July 18-19.