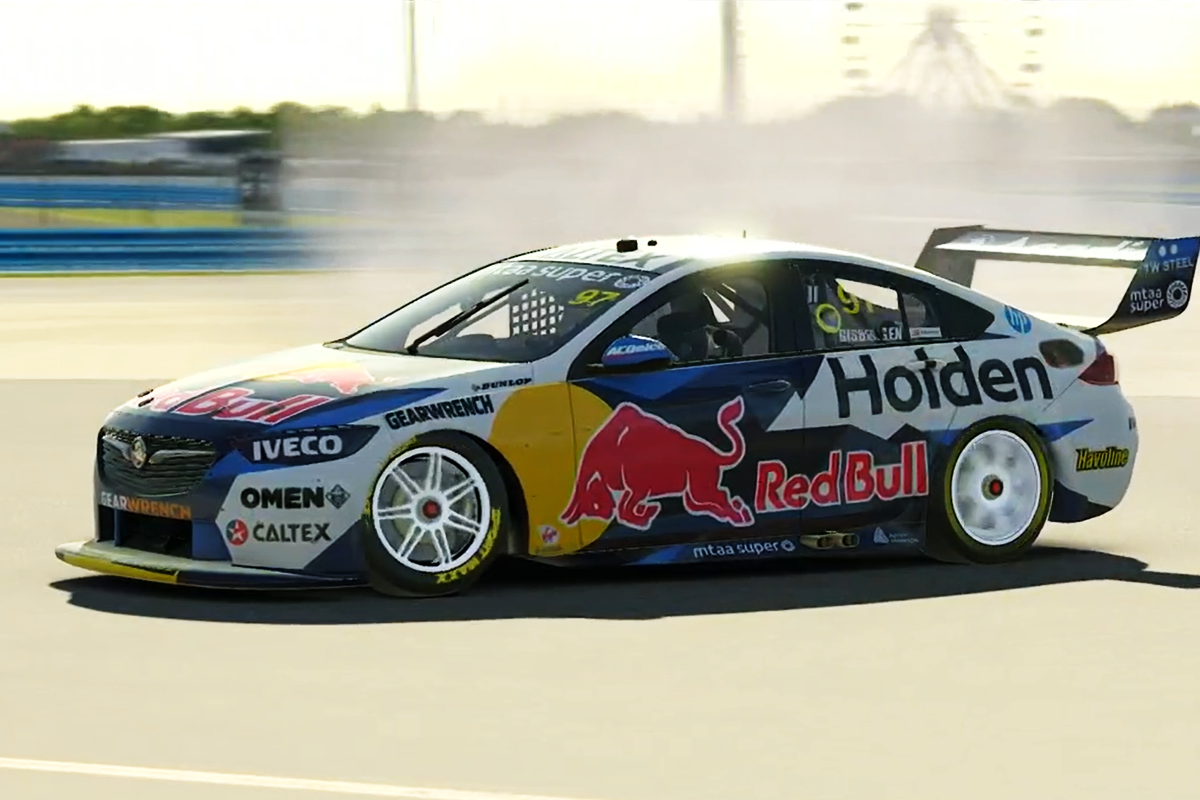 Shane van Gisbergen has surged into the lead of the BP Supercars All Stars Eseries with three straight wins in Round 7 on the high banks of Charlotte and Daytona.

Race 22 of the night was a closely fought affair with Anton De Pasquale of Penrite Racing, but Race 23 was a dominant display by the 31-year-old sim racing veteran.

Having claimed pole position earlier in the night, van Gisbergen got the jump over De Pasquale on the opening lap.

Missing from the start was Walkinshaw Andretti United wildcard Norris who had to begin the race from the pit lane.

Chaz Mostert looked to make headway on the first lap. He gave De Pasquale a nudge through the International Horseshoe and nearly sent the second placed pilot into a spin.

Through the opening lap melee, Shell V-Power Racing Team driver Scott McLaughlin passed Mostert but went too deep through the chicane and off the road.

He incurred a slow-down penalty and was forced to drop back, which put him down to 10th.

There were more dramas for McLaughlin after he copped a tag from DeWalt Racing driver Scott Pye at Turn 1 and spun into the run-off.

At the head of the fieled it was van Gisbergen who held the advantage over De Pasquale, Mostert, Cameron Waters, and Lee Holdsworth.

Lap 3 saw Holdsworth loop out of fifth place as a result of contact with Jake Kostecki at Turn 2.

The drama continued as Garry Jacobson got into Kostecki and sent him into a spin. Waters was caught out too and spun on the rejoin to the superspeedway.

Come Lap 4, the battle for the lead began to heat up between van Gisbergen and De Pasquale.

At the end of the lap De Pasquale came to the pit lane and a lap later van Gisbergen followed suit.

De Pasquale got the undercut on van Gisbergen, though the margin between them was slim.

A kerfuffle in the mid-pack saw Irwin Racing’s Mark Winterbottom hit Fabian Coulthard who got into Bryce Fullwood and spun around.

Having already had a tough night, Norris was caught out too, clipped by Coulthard at Turn 1 and sent spinning.

Come Lap 7, van Gisbergen got the slipstream down the back straight and snagged the lead away from De Pasquale.

Having pitted early, Mostert was third once the pit stop sequence was completed.

Ultimately, van Gisbergen held on to claim a narrow win over De Pasquale who couldn’t get enough of a tow on the final lap to challenge for the win.

After the mid-race drama, Norris finished 14th. Waters was the most notable omission from the top 10, eventually finishing 26th.

Van Gisbergen was a dominant force in the final race of the night at Daytona International Speedway, largely unchallenged in a 16-lap affair.

In what was a five-way battle for the final podium places, Mostert usurped Jacobson late in the piece while McLaughlin, De Pasquale, and Reynolds ran out of time to mount an attack.

Missing from the start was De Pasquale, who failed to connect to the server in time and began the race from pit lane.

From pole position, it was van Gisbergen who got the jump on the field into Turn 1.

McLaughlin got a hit from behind but recovered to get through Turn 1 unscathed. However, he copped a slow-down penalty for cutting across the grass.

Le Brocq received a drive-through penalty for the contact with McLaughlin at the race start but didn’t serve it and was later given a five-second post-race penalty.

With two laps completed it was van Gisbergen who led Mostert, Reynolds, Jacobson, and Le Brocq.

By the end of Lap 6, the field cycled through the pit lane for its first compulsory pit stop.

On the re-join, van Gisbergen came out just ahead of Reynolds. Mostert was third and Jacobson fourth.

When van Gisbergen returned to the track the gap from first to second was only a few car lengths. However, as Reynolds, Mostert, and Jacobson battled, that lead opened up.

Come Lap 8, Mostert finally got through on Reynolds for second place who slowly fell back.

With the second round of pit stops completed the race was still led by van Gisbergen.

Jacobson surged through to second while Mostert fell to third and was harried by McLaughlin who had recovered from Lap 1 dramas.

While van Gisbergen was untouchable out in front, Jacobson and Mostert fought hard for the final two places on the podium.

Mostert got the best of Jacobson through the International Horseshoe and snagged second place, which he ultimately held on to.

McLaughlin sought to get by Jacobson, but couldn’t make a move.

De Pasquale was an impressive fifth place after starting from the pit lane with team-mate Reynolds in sixth.

Le Brocq was seventh, but a five-second post-race penalty dropped him to eighth behind Holdsworth. Coulthard, and Heimgartner completed the top 10.

The BP Supercars All Stars Eseries continues on May 27 on 18:00 AEST at Imola and Interlagos.