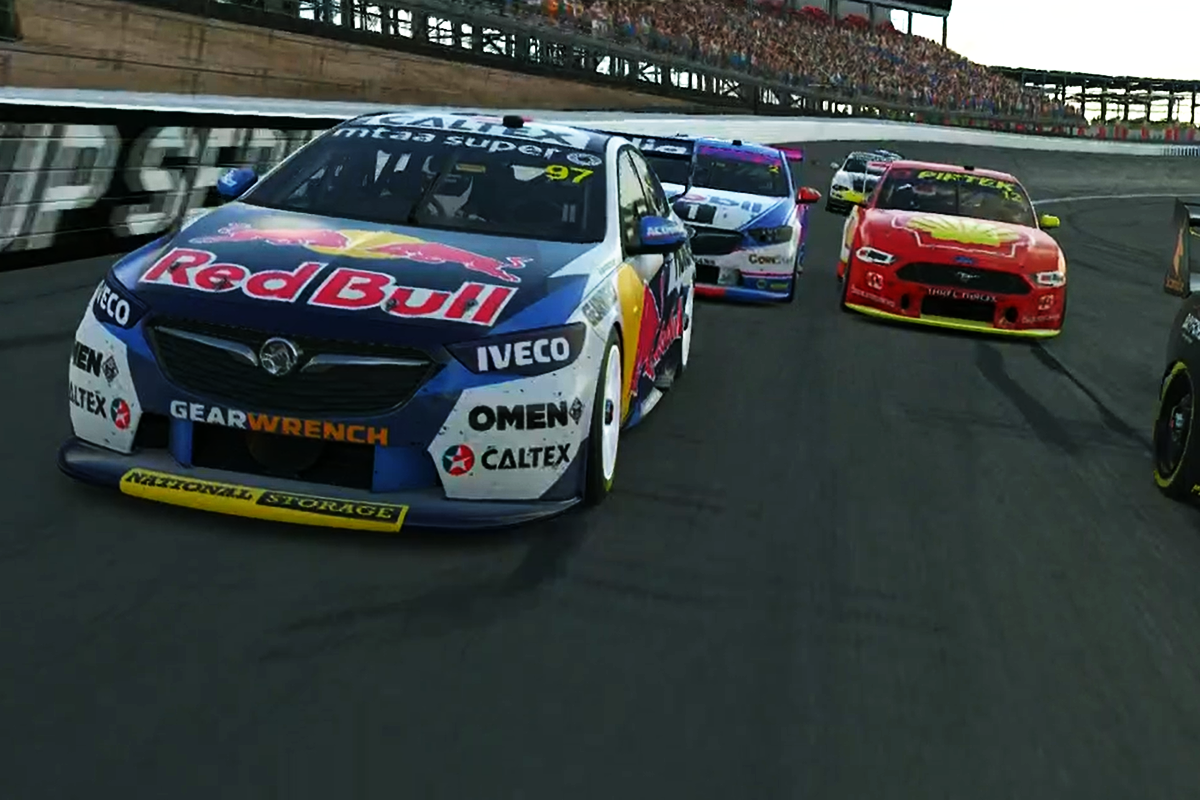 Shane van Gisbergen has narrowly defeated Cameron Waters in an intense finish to Race 21 of the BP Supercars All Stars Eseries at Charlotte Motor Speedway.

An incident late in the race took out several key contenders and left van Gisbergen, Waters, Fabian Coulthard, and Bryce Fullwood to jockey for the win.

Ultimately, van Gisbregen used the high line to his advantage and got a good run off the final corner to secure the win.

The 35-lap race got underway without too much drama as the field got through the first two turns without incident.

Having had a poor qualifying effort, Scott McLaughlin’s woes were compounded when contact with Jack Smith saw him spin into the pit lane.

The Shell V-Power Racing Team driver took his compulsory pit stop at the end of Lap 1 and lost a lap to the leaders.

At the head of the field it was Anton De Pasquale of Penrite Racing who was harried by Walkinshaw Andretti United wildcard Lando Norris.

Come Lap 4, Norris went to the inside and took the lead. Just moments later, and van Gisbergen got up alongside De Pasquale and the pair went side-by-side for a lap.

Soon enough it was a six-way battle for the lead.

An awkward moment for van Gisbergen saw the Red Bull racer graze the outside wall at Turn 4.

Waters nearly sent De Pasquale into a spin on Lap 13 after contact at Turn 1.

By Lap 15 of 35, Tickford Racing trio Jack Le Brocq, Waters, and Lee Holdsworth all pitted from the front group.

That left van Gisbergen to defend from Norris and Mostert with a gaggle of cars in tow.

The Walkinshaw Andretti United duo led the way on the low line while van Gisbergen went high and fell to third.

Norris was taken out of contention after a spin coming onto the final corner on Lap 17.

Just one lap later and both Mostert and van Gisbergen came to the pit lane.

Once the pit stop sequence cycled through it was Waters who led Le Brocq with Jamie Whincup the surprise performer in third.

However, it wasn’t long before Whincup was back challenging for the lead with slightly fresher tyres.

Winterbottom, McLaughlin, and Norris all came to the pit lane for a new set of tyres during the Safety Car intervention.

A drive-through penalty earlier in the race for an unsafe pit exit had dropped Mostert down the order. However, he was able to get a wave-around under the Full Course Caution to join the rear of the field.

The caution period set up a six-lap dash to the chequered flag.

Leading the way was Whincup with Le Brocq alongside him.

Whincup led the restart and held the lead into Turn 1. He established a handy advantage over Le Brocq, Waters, and van Gisbergen.

Trouble struck on Lap 30 as the front runners went three-wide into Turn 3. Waters hit Whincup who got into Le Brocq, which sent them all into the outside wall, Holdsworth caught up too.

That left Waters out in front with van Gisbergen, De Pasquale, and Fullwood in tow. Heimgartner and Coulthard weren’t far behind in fifth and sixth.

With two laps to go, Fullwood got to the outside of Waters and moved to second place on the high line.

At the front, van Gisbergen got into the side of Fullwood who went up the banking and into the wall.

Simultaneously, Coulthard made contact with De Pasquale who spun and fell outside of the top 10.

As the cars came to the final corner, van Gisbergen went high and Waters low.

In what was a drag race to the finish, van Gisbergen managed to just edge out Waters at the end of the race.

In the end, just 0.017s split van Gisbergen and Waters at the chequered flag.

Coulthard claimed the final place on the podium in third with Fullwood fourth and Heimgartner fifth.

Anton De Pasquale finished 15th after the contact with Coulthard. Meanwhile, McLaughlin finished 27th after contact late in the piece took him out of the running.