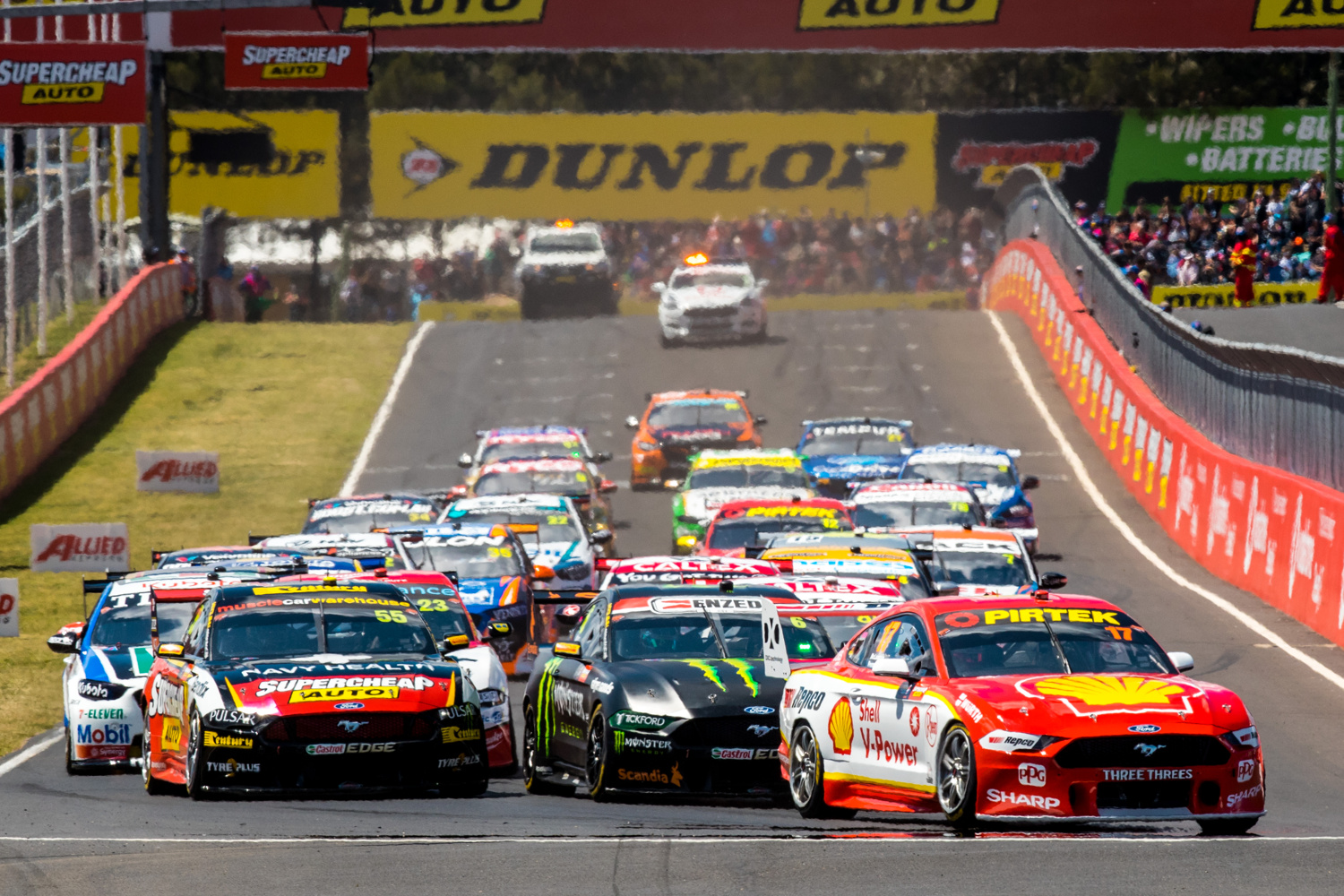 The 2020/21 Supercars season will conclude at Mount Panorama

Supercars has released a revised draft calendar that comprises 13 rounds total and will conclude in 2021 at Mount Panorama.

As previously revealed by Speedcafe.com, the most significant change to the calendar is the cancellation of the Gold Coast 600 and Newcastle 500.

Most revised events will likely run over two days with formats and the inclusion of spectators to be confirmed closer to the start of each event.

The first round since the Virgin Australia Supercars Championship stalled due to the coronavirus pandemic will take place at Sydney Motorsport Park on June 27-28.

The championship then heads to Winton Motor Raceway on July 18-19 followed by the Darwin Triple Crown at Hidden Valley Raceway on August 8-9.

Confirmed earlier this week by Speedcafe.com, the Townsville 400 will retain its place on the calendar. However, it will run with a revised date of August 29-30.

The Bend Motorsport Park will host a round on September 19-20, though it has not yet been confirmed whether it will be a Pirtek Enduro Cup round.

The only event to have maintained its date and four-day format in the revised calendar is the Supercheap Auto Bathurst 1000 at Mount Panorama Motor Racing Circuit over October 8-11.

The teams will then head west to Wanneroo Raceway over October 31-November 1. The event will no longer be a night event as originally planned.

Symmons Plains Raceway hosts the championship on November 21-22 before heading to Sandown Raceway on December 12-13.

The penultimate round of the championship will see the teams head to New Zealand at a yet-to-be-determined venue on January 9-10.

Either Pukekohe Park or Hampton Downs Motorsport Park will be used for the first race of the new year. Discussions are ongoing with the relevant stakeholders to decide which circuit will host the New Zealand round.

The championship will conclude in 2021 with a sprint event at Mount Panorama on February 5-7, currently slated as a support to the Bathurst 12 Hour.

The move to Mount Panorama for the final round of the championship means Supercars can still fulfil its commitment to the New South Wales Government to host the final in the state.

Race formats have not yet been confirmed and all events are currently subject to change.

“To be in a position to release a calendar is great news for our sport,” Supercars CEO Sean Seamer said.

“This plan allows us to deliver a world-class Championship while remaining agile and responsive to changing conditions.”

More details are expected to be provided on an event-by-event basis as to whether spectators will be allowed to attend.

As it stands, Sydney Motorsport Park is the only event with any determination on whether spectators can or cannot attend.

However, efforts are being made by the Australian Racing Drivers’ Club to facilitate a ‘park-and-view’ concept that would allow spectators to watch from their cars.

“We’re buoyed by some of the conversations that we’re having with the state governments and excited for both Winton and Bathurst to see Stage 2, the ability for campgrounds to open,” said Seamer

“The stringent guidelines we have developed are based on expert medical advice and the advice of our Government partners and Motorsport Australia and prioritise the safety and wellbeing of our people, teams, drivers and officials,”

“We will continually assess the possibility of admitting fans to events based on the direction of
government restrictions, including how we might be able to accommodate camping and Park &
Ride.

“At this stage the June event at Sydney Motorsport Park will be a television only event with no fans in attendance.”

Points scored at Round 1 of the season, the Adelaide 500, will still count towards the championship.

The ill-fated Melbourne 400 will still technically be counted as a round of the championship given cars practised and qualified.

*All events are provisional