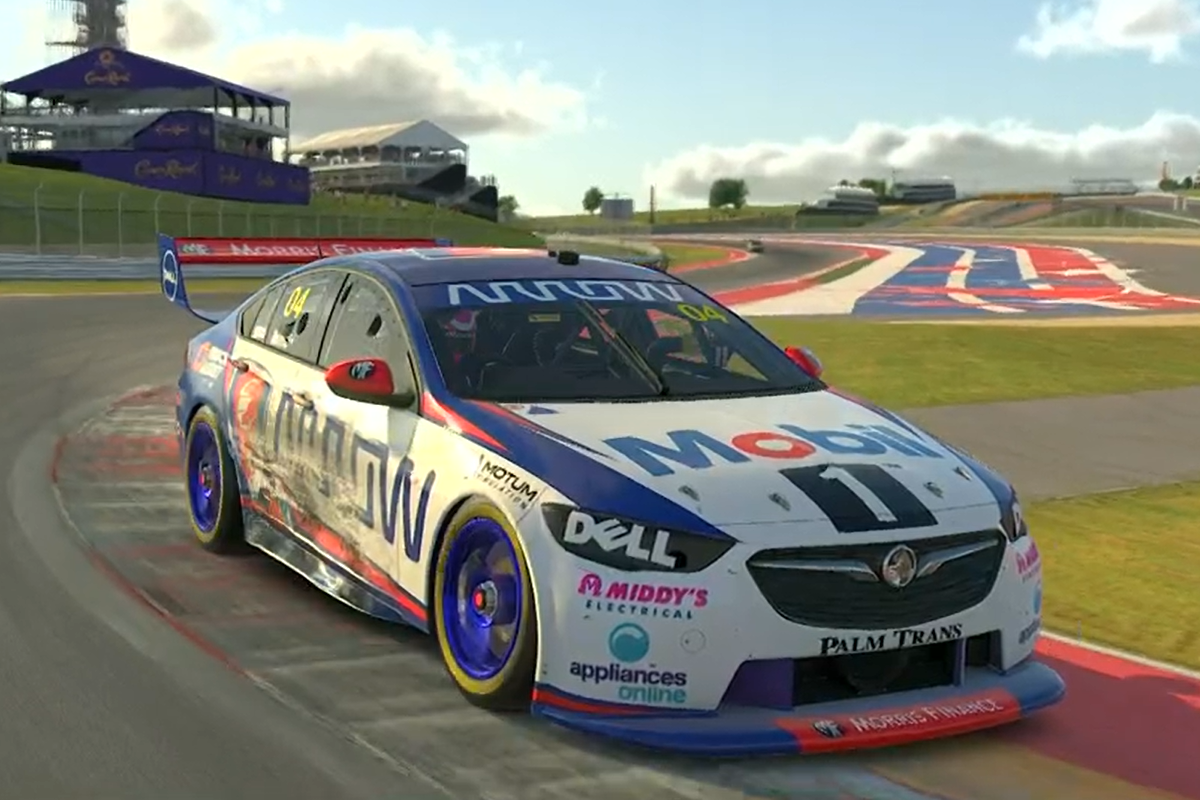 Supercars champion Shane van Gisbergen and Formula 1 driver Lando Norris have scored one win apiece at Circuit of The Americas in the BP Supercars All Stars Eseries.

Race 18 of the Eseries saw van Gisbergen claim a dominant win for the Red Bull Holden Racing Team at Circuit of The Americas.

He led from pole position, through the pit stop sequence, and cruised to the chequered flag ahead of Anton De Pasquale and Scott McLaughlin.

Race 19 was a dramatic affair for much of the field, with the front-runners put to the rear in a reverse grid affair.

After having troubles in the opening race of the night, Norris started from the second row and wasted no time getting to the front of the field where he ultimately finished.

Shane van Gisbergen cruised to victory in Race 18 of the BP Supercars All Stars Eseries at Circuit of The Americas.

Van Gisbergen defended hard against De Pasquale and McLaughlin into the tight Turn 1 to take the holeshot.

At the end of Lap 1, Will Power got through on Lee Holdsworth for fourth. Despite a strong fightback from Holdsworth, Power held the position.

After a dangerous re-entry that took out Jack Le Brocq, Jake Kostecki copped a drive-through penalty and fell to the back of the field.

Waters and Norris made their way through Mostert on Lap 5 after the Supercheap Auto Bathurst 1000 winner opened the door into the stadium section due to a slow down penalty.

At the end of Lap 5, van Gisbergen, McLaughlin, and Norris came to the pit lane.

De Pasquale followed suit a lap later, as did Waters and Mostert.

Once the pit stop sequence cycled through it was van Gisbergen who had the advantage over De Pasquale with McLaughlin in third.

Drama struck on Lap 7 when Norris got into the back of Waters and sent the Monster Racing driver into a spin coming onto the back straight.

Norris was duly handed a drive-through penalty by Driving Standards Observer Craig Baird. He pitted from sixth on the road and returned to the race in 16th.

As the race neared its end, Norris fell to the rear of the field to ensure he earned a higher starting position for the reverse grid race that followed.

Ultimately, van Gisbergen extended his lead over De Pasquale and cruised across the line to take a dominant win.

McLaughlin completed the podium places while Power was fourth ahead of Holdsworth. Mostert, Garry Jacobson, Heimgartner, Will Davison, and Le Brocq completed the top 10.

With the results from the previous race reversed to set the grid it was Josh Fife who started from pole position alongside Craig Lowndes.

Norris was third while the likes of van Gisbergen, De Pasquale, and McLaughlin were 31st, 30th, and 29th respectively.

Fabian Coulthard was an early casualty as was Mark Winterbottom on the run up to Turn 1. Heimgartner also go taken out who in turn collected Tander.

Moments later and McLaughlin was caught up in another incident at Turn 1 after Chris Pither went spinning.

Rick Kelly rear-ended McLaughlin in the process, stripping the Eseries leader of his rear wing and bonnet.

Lowndes spun on his own out of the chicane and a few corners later Whincup suffered a similar fate.

Through the melee it was Todd Hazelwood who led the first lap. Norris was second, Waters third, Kostecki fourth, Fullwood fifth, and Fife, Davison, Scott Pye, David Reynolds, and Austin Cindric the top 10.

Several cars came to the pit lane for their compulsory pit stops and for repairs.

Norris managed to usurp Hazelwood through the final corner at the end of Lap 3 to take the lead.

Despite starting from 31st on the grid, van Gisbergen stayed out of trouble and charged his way through the field.

By half-race distance the Kiwi was into the top five positions.

Norris came to the pit lane at the end of Lap 5 and returned in seventh as the effective leader.

Van Gisbergen opted to stay out and pitted late in the race. He came to the pit lane on Lap 9.

Once the field cycled through it was Norris who led Waters, Hazelwood, Kostecki, and De Pasquale.

Fullwood was sixth, Mostert seventh, and van Gisbergen up to eighth. Davison and Pye completed the top 10.

In the end, Norris came across the line clear of Waters. Hazelwood was an impressive third ahead of Kostecki, De Pasquale, Fullwood, Mostert, Van Gisbergen, Davison and Pye.

McLaughlin couldn’t recover from his race start drama and finished 18th just ahead of team-mate Coulthard.