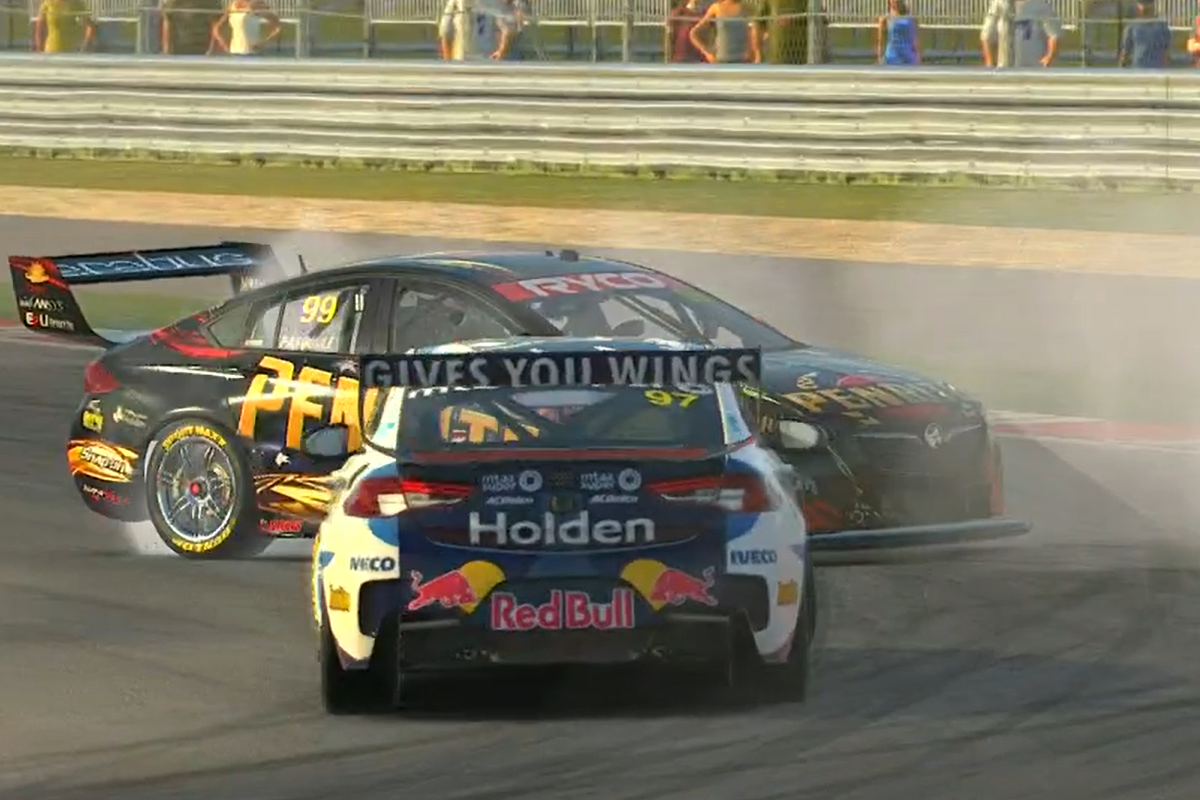 Anton De Pasquale has held on to win at Circuit of The Americas despite being spun by Shane van Gisbergen on the final lap in Race 20.

After a relatively tame fight for top spot in the 20-lap race, van Gisbergen narrowed the margin to De Pasquale and sought to make a move on the final lap.

The Red Bull Holden Racing Team driver looked down the inside but clipped the left rear of the Penrite Racing driver.

However, van Gisbergen slowed and with a handy margin back to third gave the lead back to De Pasquale without any more drama.

“Me and Shane have been nose-to-tail for a couple of weeks now, so it’s kind of whoever starts in front and leads to Turn 1 wins the race,” said De Pasquale.

“That was the aim for the night. Obviously he came at me a bit at the end there and had a dive.

“I think he knows no matter what happened whether he took me out he had enough of a gap to redress it and get to the line.

Race 20 of the Eseries pitted De Pasquale on pole position alongside van Gisbergen.

Lando Norris sought to make headway early on but clipped Scott McLaughlin at the hairpin and half spun the Shell V-Power Racing driver.

At the end of Lap 1, it was De Pasquale who held the advantage over van Gisbergen, Cameron Waters, Chaz Mostert, Will Davison, Will Power, McLaughlin, Todd Hazelwood, Jack Le Brocq, and Garry Jacobson.

Norris fell to 14th after he suddenly slowed out of the chicane due to a penalty.

McLaughlin got himself out of the early melee and completed the first of his two compulsory pit stops at the end of Lap 2.

The effect of the undercut helped van Gisbergen, but the Kiwi couldn’t pull off a pass on the rejoin.

Power opted to run long in the first stint and pitted on Lap 9.

That put De Pasquale back into the lead with van Gisbergen second and Waters a distant third.

McLaughlin made his way back up to fourth after his clash with Norris while Davison was fifth.

Lap 14 saw De Pasquale pit from the lead of the race and a lap later van Gisbergen pitted too.

Still, it was De Pasquale who led the race, however, the margin was greater than before.

With a handful of laps to go, Waters lay third with Davison fourth and McLaughlin fifth. Power, Jacobson, Le Brocq, Norris, and Heimgartner completed the top 10.

Drama late in the piece saw Waters and McLaughlin come to blows at Turn 1.

Contact resulted in a spin for McLaughlin while Waters drove away from the scene of the clash.

McLaughlin fell to fifth but soon got a place back on Davison.

Waters was subsequently told by Driving Standards Observer Craig Baird to give the place back to McLaughlin, who he let through on the final lap.

The closing stages of the race saw van Gisbergen narrow the gap to De Pasquale.

Come Lap 20, van Gisbergen slipped his nose down the inside of De Pasquale and sent the Penrite Racing driver into a spin at Turn 15.

With margin back to McLaughlin and Waters, van Gisbergen slowed and let De Pasquale retake the lead.

That was the way it stayed as De Pasquale claimed the win with van Gisbergen second and McLaughlin third.

The BP Supercars All Stars Eseries continues with Round 7 at Daytona International Speedway and Charlotte Motor Speedway on May 20 at 18:00 AEST.