Miller one of five in race for factory Ducati seats

Miller one of five in race for factory Ducati seats 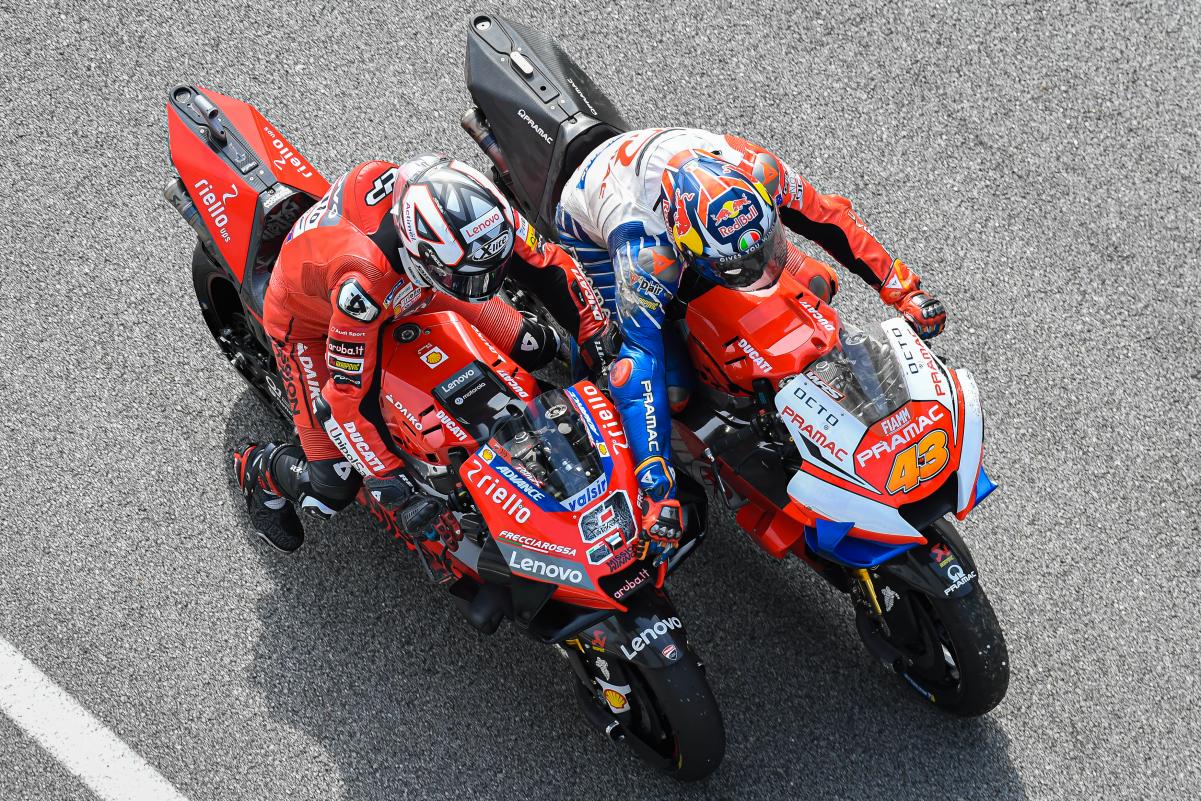 Jack Miller is one of five riders being considered for the seats at the factory Ducati squad next year, says Team Manager Davide Tardozzi.

Ducati had been interested in signing Maverick Viñales and/or Alex Rins but they have already renewed with the Yamaha and Suzuki factory teams respectively.

Tardozzi has now affirmed the theory that the Ducati Team’s riders for the 2021 season will come from within its ranks.

“I am sure there will be two riders who are currently under contract with Ducati,” he said in an interview published by Italian website, GPOne.com.

Miller, his Pramac Racing team-mate Francesco Bagnaia, and Reale Avintia Racing’s Johann Zarco are all directly contracted to Ducati, making for a race in five alongside the incumbent factory team riders in Andrea Dovizioso and Danilo Petrucci.

All are also on deals which expire at the end of the 2020 season.

When that arguably large figure of five was put to Tardozzi, he responded, “Races are competition, and, on the track, you have to prove that you are worthy of the factory team.

He did, however, express a desire to see Dovizioso remain, while indicating that the decision will be that of Ducati Corse General Manager Gigi Dall’Igna.

“I think it’s in everyone’s interest to come to a positive conclusion,” replied Tardozzi when asked if Dovizioso will stay.

“I’m not the one to carry out the negotiation; it is in the hands of Dall’Igna, who knows everything and what to do.

“I think also for Andrea it is an opportunity to carry on with Ducati.

“The rider alone cannot do everything; every now and then, the bike gives him a hand.”

Dovizioso’s tally of race wins has dwindled from six in 2017 to four in 2018 and two last year, but #04 has been beaten to the championship by only Honda’s Marc Marquez in each of those seasons.

Tardozzi was enthusiastic in his praise for the Italian, whose reputation appears to have taken a hit in recent times.

“Andrea is an underrated rider and a golden boy,” he declared.

“He is underrated because he is not a social media man and a person who wants to emerge at all costs.

“(It is) Not by chance has he been three times world championship runner-up behind a rider like Marc Marquez, so those who denigrated him don’t understand motorcycling.

“I think he is worth more than he has ever demonstrated.”

Miller’s manager, Aki Ajo, recently told Germany’s Speedweek that it would be the “natural way” for him to be called up to the factory team.

The Australian was made to wait for his current deal, which was nearly derailed by what would have been the return of Jorge Lorenzo to Ducati, and comments from Dall’Igna earlier this year suggest that there will not necessarily be a speedy conclusion to the Bologna factory’s contract talks this time around.

“With (some riders) I have had the feeling that they do better when they are under pressure,” he said.

The MotoGP season could finally start on July 19 with the first of two races in the space of as many weekends at Jerez under a proposal formulated by Dorna Sports which is awaiting Spanish government approval.