WHERE ARE THEY NOW: Fred Gibson

WHERE ARE THEY NOW: Fred Gibson As Moffat battles dementia, Gibson is one of the key people who remain in his corner during these difficult times.

The former top racer and champion team owner is assisting Moffat as the Canadian expat now faces his days confined to a nursing home in Melbourne.

Up until recent times, Gibson was busy engaging in running a few Historic Touring Cars out of Alan Heaphy’s workshop. Gibson (left) at the relaunch of Gibson Motorsport

“For a few years there, we basically re-invented Gibson Motorsport with an historic program.

“But now a lot of my time is taken up trying to help Allan Moffat out every week.”

While reminiscing about his pioneering years with Nissan in the early 1980s, Gibson switches to more contemporary times with his passionate and noble efforts in assisting Moffat with day-to-day life.

“Allan is a mate. We drove together and we are good friends even though we were competitive with each other,” Gibson explained.

“We were going to Dutton’s Garage once a week for lunch with Allan.

“But, right now, we can’t see him at all because the nursing home is in lockdown with this virus threatening the whole world.”

Before isolation put a hold on everyone’s daily routine, Gibson said he would often do appearances with Moffat.

“I would do appearances with him. He doesn’t talk much anymore but if I’m with him, he is terrific,” explained Gibson.

“If he and I are standing up doing a talk, I can bring him back on track.”

Gibson says, until recently when the world order was turned on its head, he was seeing Moffat up to three times a week.

“Phil Grant (Allan’s manager) has done an incredible job and I can’t speak highly enough of the time and effort he’s been putting in helping Allan out.

“Allan had to move into this nursing home because he would get lost in Toorak.

“Sadly, one day Allan rang me and he said, ‘I’ve got a problem’. And he was in the city somewhere and he said, ‘a man was putting something on my wheel’.

“Anyway, it turns out it was a parking cop and Allan had fines he hadn’t paid and they were clamping his wheels. So, I got the bloke on the phone and paid the fines on my credit card.

“Eventually after that we had to take the car off Allan. It is so sad but that was reality that he just couldn’t be out driving any more.

“Andrew, Allan’s first son, is terrific and so is Phil Grant and I do as much as I can to help everyone.”

Gibson recalls a race meeting at Oran Park when Moffat was handling the Phase III Falcon of the early 1970s and he had set his mind that he was going to take pole.

“I had done a lap and qualified and Moffat was sitting in his car so I went down to see how he was because no one could really talk to him like I could,” Gibson said.

“He was sitting in his car with his helmet on looking straight ahead and he looked at me and said, ‘you know if I can just get the apex better at the end of the straight I reckon I can get pole’.

“And that’s just what he did because he put so much mental thought into it. Peter Brock was a natural but Moffat wasn’t. He really had to work at his job.

“He was just sitting, waiting, gearing himself up to get through that first corner flat and that’s how it was.” 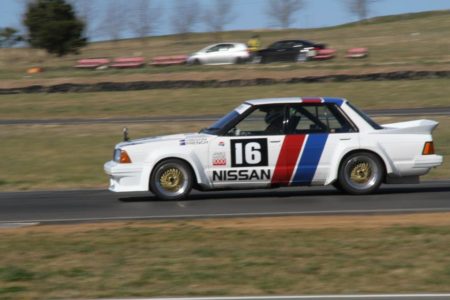 While bringing Speedcafe.com up to speed with his care work with Moffat, Gibson also revealed his excitement about a project Heaphy is currently immersed in that involves one of the more significant Nissan touring cars from the Group C days.

Heaphy is currently restoring the Nissan Bluebird Turbo which Gibson shared with George Fury as part of a Japanese factory effort at Bathurst in 1982.

The Bluebird went missing for many years; however, Heaphy managed to locate it. The car was stored in a shed and essentially left alone. It became a classic ‘barn find’.

“I don’t know how he found it but he ended up bringing it back to Melbourne and it hadn’t turned a wheel for years,” said Gibson.

“Pete West, who used to work in the race cars in my team, is doing the work on the Bluebird now and he’s doing a super job of it.”

The Bluebird that was crewed by the visiting Japanese drivers had qualified in third place with the turbo-powered four-cylinder causing quite a stir among the V8s in the Hardies Heroes shootout in 1982.

It was a hint of better things to come with the Bluebird qualifying second in 1983, then winning pole (George Fury) in 1984 from Peter Brock’s VK Commodore.

“The Bluebird that is being restored is an important touring car in the scheme of Australia. As we mentioned earlier, it went missing and for a long time no one knew where it was.

“It’s being brought back to life to pretty much the state it was in for me in Sydney at the time.”

Gibson recalls candidly a funny moment in the lead-up to the 1982 James Hardie 1000 when the Japanese team members arrived in Sydney.

“I was told to pick up the two drivers of the other Bluebird (Masahiro Hasemi, who qualified third, and co-driver Kazuyoshi Hoshino) at their hotel in Sydney,” Gibson said.

“My road car then was a Datsun 280C, so I chauffeured them to Bathurst.

“There was an interpreter with them because they couldn’t speak a word of English.

“When we drove into Bathurst the interpreter said, ‘Gibson-san, we need to drive around circuit’.

“So okay I drove them around once then we were going up the mountain again and the interpreter said, ‘please stop car’.

“And they got out and it was when there was no wall around up the top in those days.

“There was a bit of disbelief on their faces but essentially the drivers both said to their interpreter that, ‘this is a very dangerous circuit’. And I said to them, ‘it is very dangerous if you crash, so don’t crash’.”

The Japanese went on to be classified in eighth position while Fury and Gibson’s Bluebird, which had qualified 10th, was eliminated after 40 laps when it suffered mechanical failure.

Gibson was inducted into the Supercars Hall of Fame in 2004.