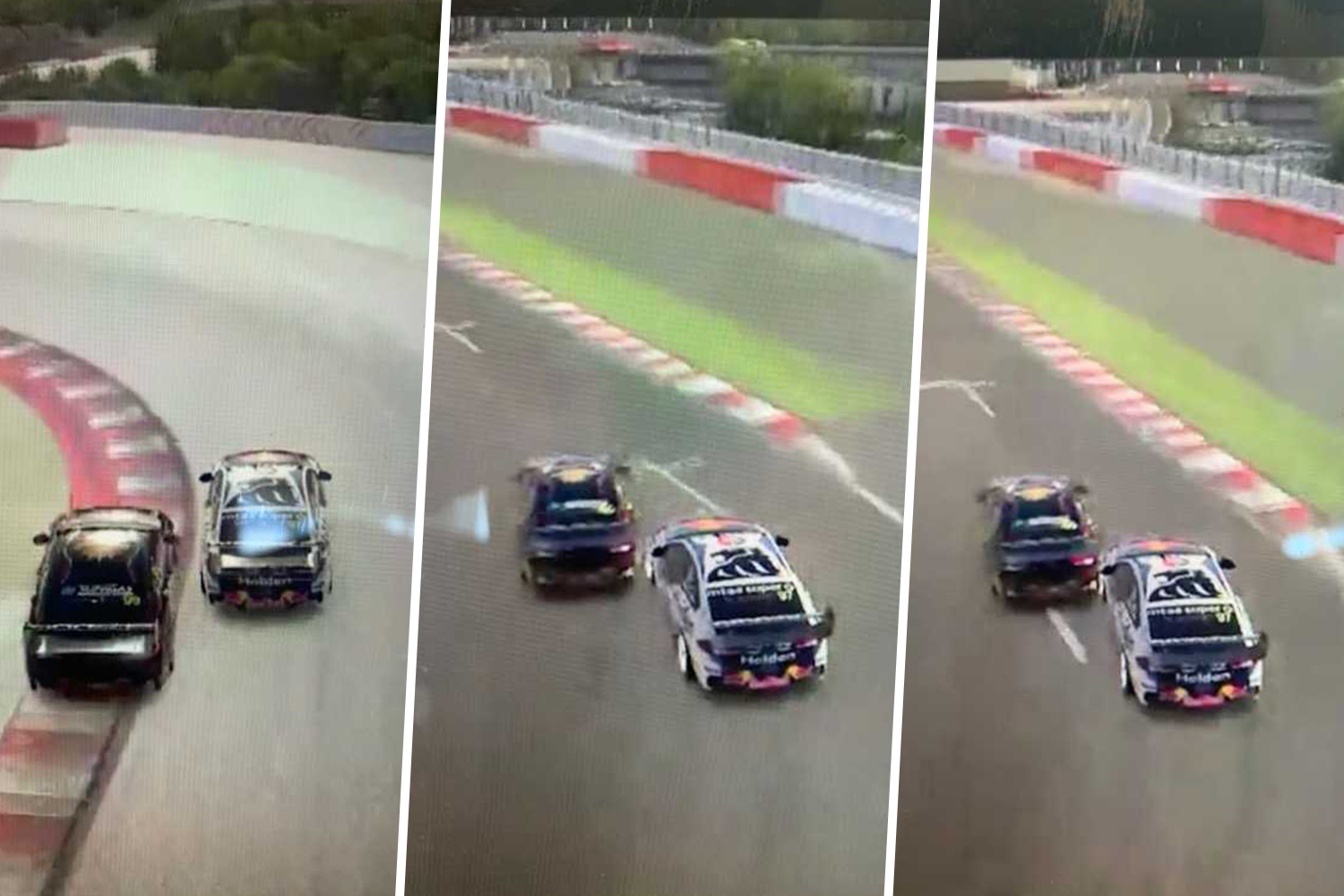 Shane van Gisbergen was relegated to fifth in Race 15

Shane van Gisbergen has been stripped of victory in Race 15 of the BP Supercars All Stars Eseries at Spa-Francorchamps but has kept his round win.

The Red Bull Holden Racing Team driver was embroiled in a last-lap incident with Anton De Pasquale of Penrite Racing while dicing for the lead.

Contact between the pair left De Pasquale in the tyre barrier while van Gisbergen held on to win from Scott McLaughlin and Cameron Waters in a drag race to the chequered flag.

As a result of a post-race investigation, van Gisbergen has been stripped of his win and repositioned to fifth behind De Pasquale who has been promoted to fourth.

Despite being relegated in the first race of the evening, van Gisbergen still held on to the round win.

Referencing a sequence of images (pictured above), Baird said, “If you have a look at the first image, that’s where Anton is trying to go around Shane on the outside.

“Shane gives him no racing room, he puts Anton all four corners off the racing road.

“Then the next image, Anton clearly gives Shane heaps of room on the flip side, you can see that. Then Shane makes contact with left hand down.

“He hasn’t got enough overlap and should have conceded that position, but he stays in it with his left hand down on the on-board and doesn’t lift off the throttle.

“He could have moved more to the right. It’s avoidable contact. He had a better option, he didn’t have to take Anton out. Especially with such a minimal overlap.

“It’s totally different if he’s up to the B-pillar on the exit and has half a car overlap. He has a chance of making a pass into the last corner.

“From where he’s positioned there he has no chance. Anton has got that position, clean and simple.”

Baird explained that using conventional real-world penalty processes combined with the mechanics of the game, which has its own penalty system, is a challenge.

After the completion of Race 15, De Pasquale was classified by iRacing as being 18th despite crossing the line in fifth.

That was as a result of receiving excess penalty points, which automatically applied a post-race penalty.

However, given the contact with van Gisbergen which led to De Pasquale exceeding his threshold, Baird said the final result as recorded by iRacing wasn’t fair nor correct.

“I recommended a penalty there and then, but as iRacing came back to me, that would have put (van Gisbergen) near the front for the reverse grid, which would have helped him,” said Baird.

“You can’t do that, so (Supercars) said we would do it after the race meeting.

“Because of the crash with van Gisbergen, (De Pasquale) had an extra four penalty points. That gave him a black flag in the game, not me. That’s where it can get confusing for the punters.

“We didn’t want to give Shane a penalty and gift him a front-row start for the next race either.”

Like De Pasquale, Scott McLaughlin also broke the threshold of penalty points by crashing into Cameron Waters after the race had completed.

As a result of an automatically applied penalty, McLaughlin was shown in the results as being 15th despite crossing the line in second.

That created confusion as wildcard Lando Norris was shown as finishing third in the broadcast when had finished fourth.

Baird said drivers were trying to accrue post-race penalty points to potentially affect their race results recorded by iRacing, which automatically sets the grid for the reverse grid.

However, for the reverse grid race, McLaughlin started in 29th in accordance with his second place finish.

Similarly, De Pasquale started towards the rear of the field despite being classified 18th, which would have otherwise seen him start on the fringe of the top 10.

In effect, the driver’s efforts to adjust the result hadn’t worked.

“Scott knows that if he crashes at the finish line he still gets his race result, but if he’s close on penalty points he goes over the threshold because it doesn’t stop (scoring) until the last car crosses the line,” Baird explained.

“That’s why all these drivers crash after the finish line because they hope those big crashes for points is enough to put them over and receive an in-game black flag.

“They’re all finding boundaries of how to fudge the game, which I’m really proud of because that’s what we are. We’re race drivers. We’re engineers. We fudge the books.”

Baird said the Eseries has been a challenge from a sporting point of view as drivers figure out ways to exploit the game mechanics.

Following Round 4 of the Eseries several drivers were found to be running through pit lane without the pit lane speed limiters on.

The game mechanics of iRacing typically penalise drivers for exceeding the speed limit.

However, drivers can run through pit lane without their speed limiter and sit one or two kilometres above the limit without receiving an automatic penalty.

McLaughlin was seen running without his limiter and received a black flag for speeding at Watkins Glen, but requested it be cleared for what he thought was a technical glitch.

Supercars has since outlawed the trick, requiring drivers to run the limiter in any pit stop.

“Our guys are probably smarter than the game,” he said.

“We’ve got to almost introduce new rules each week because they’re outfoxing the game.”

“There was nothing in the rule book saying they had to run it, so they didn’t cheat. They outfoxed the game. So now you have to leave it on or else you get a penalty like in Supercars.”

The BP Supercars All Stars Eseries continues on May 13 at 18:00 AEST.