Spills at Spa as van Gisbergen and Feeney split wins

Spills at Spa as van Gisbergen and Feeney split wins 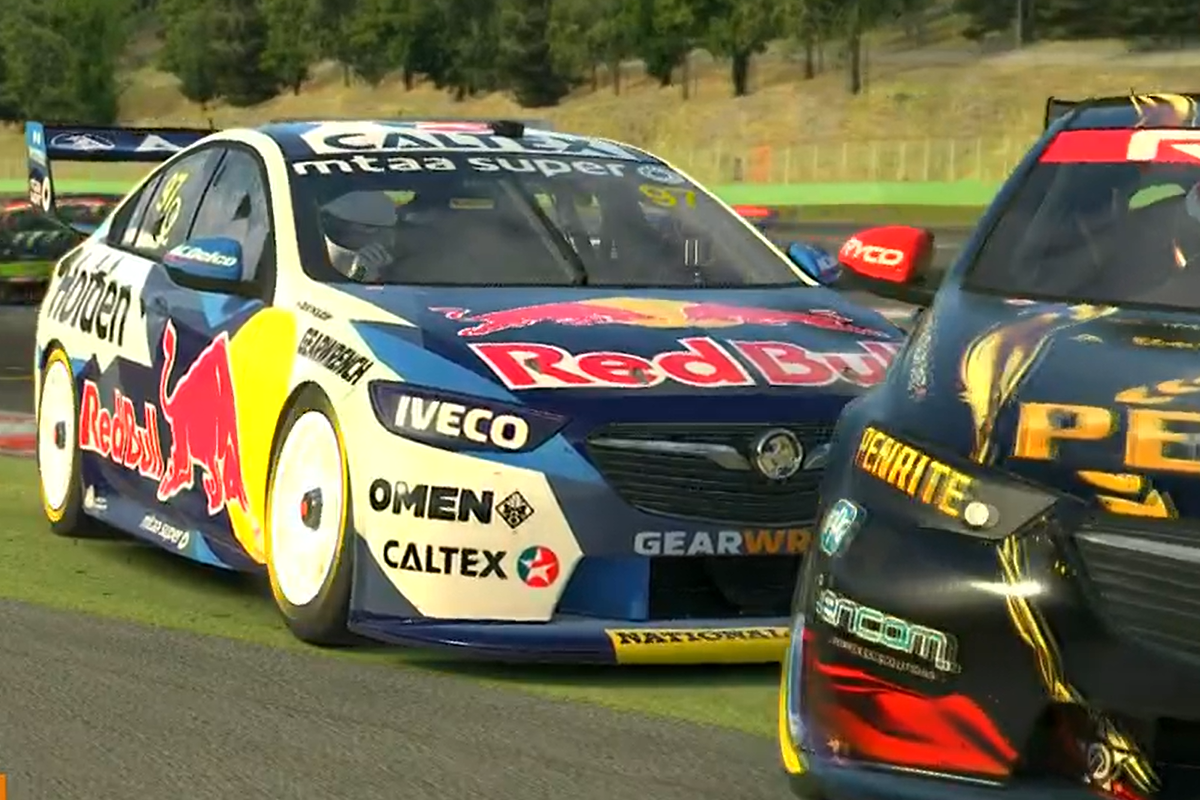 The two eight-lap races were punctuated by late-race battles.

In Race 15 of the Eseries it was van Gisbergen who triumphed, but not drama after contact with Anton De Pasquale sent the Penrite Racing driver into the tyre wall at the penultimate turn.

As a result, van Gisbergen was assessed a post-round penalty.

While Courtney and Winterbottom went spinning the opening few laps, Feeney stayed out of trouble, completed his pit stop, and passed Will Davison late in the race to take the win.

Van Gisbergen held off Scott McLaughlin and Cameron Waters in drag race to the chequered flag to claim the first win of the night at Spa-Francorchamps.

The Red Bull Holden Racing Team driver fought for the lion’s share of the race with De Pasquale, only for the pair to come to blows at Bus Stop Chicane.

De Pasquale spun into the wall while van Gisbergen survived a last corner attack from McLaughlin and Waters to win by a mere one tenth of a second.

Initially, it was van Gisbergen who got the holeshot into Eau Rouge and up to Raidillon on the opening lap.

In the mid-pack, the margins blew out as the race neared halfway, but it was still tight at the top as van Gisbergen looked to keep De Pasquale, McLaughlin, and Norris at bay.

At the end of Lap 5 van Gisberegn, McLaughlin, Norris, and Waters pitted. In the process, Waters managed to leapfrog Norris.

De Pasquale and Mostert followed suit a lap later to the pit lane.

Initially, De Pasquale got the lead, but a strong run by van Gisbergen through Eau Rouge and Raidillon allowed the Kiwi to overcome the young gun on the Kemmel Straight.

Van Gisbergen closed the door into Les Combes and despite his best efforts, De Pasquale couldn’t find a way back through.

As they approached the Bus Stop Chicane, De Pasquale got on equal terms with van Gisbergen.

The pair rubbed doors through the switchback, but as De Pasquale exited the corner he had overlap with van Gisbergen and they made contact.

The ensuing contact saw De Pasquale spear into the tyre barrier while van Gisbergen carried on.

That gave McLaughlin and Waters a sniff at the win. McLaughlin went to the outside, van Gisbergen to the middle, and Waters to inside at La Source.

In a drag race to the finish, it was van Gisbergen who edged out McLaughlin and Waters. Norris was fourth and De Pasquale eventually claimed fifth. Mostert, Fullwood, Heimgartner, Percat and Holdsworth that completed the top 10.

Following the incident, van Gisbergen was given a post-round penalty with details still to be confirmed.

Feeney stayed out of trouble in the eight-lap race, made his pitstop, and managed to pass Will Davison late in the piece to claim the win.

James Courtney jumped the start but led Feeney into the first turn with Mark Winterbottom in tow.

He got a good run up the Kemmel Straight and managed to get ahead of Fenney and Courtney to take the lead. Just moments later Courtney got turned around at Les Combes.

After a frenetic first lap it was Feeny who managed to get ahead of Winterbottom, with Davison third, Jacobson, Pye, Mostert, Doohan, Goddard and Whincup the top 10.

There was drama at the end of the first lap as Pither and Norris came to blows on the front straight.

Norris ended up driving the wrong way as he sought to get back to the pit lane.

He and Pither duly blocked the pit entry. McLaughlin, Coulthard, and Le Brocq piled into the stricken pair.

As the pit stops played out it was Davison who held the effective lead of the race but Feeney wasn’t far behind.

Drama struck further down the field as Winterbottom got turned around by Jake Kostecki.

De Pasquale had to take evasive action to the inside at Les Combes while Pye went to the other side and into the gravel trap.

Once the pit stops were completed it was Feeney who led Davison, Jacobson, Mostert, and van Gisbergen. De Pasquale was sixth with Kostecki, Waters, Pye and Heimgartner the top 10 runners.

In a frenetic fight to the chequered flag, the top five drivers were all split by just a few car lengths, but ultimately, Feeney held on to become the first wildcard winner ahead of Davison, Jacobson, Mostert and van Gisbergen.