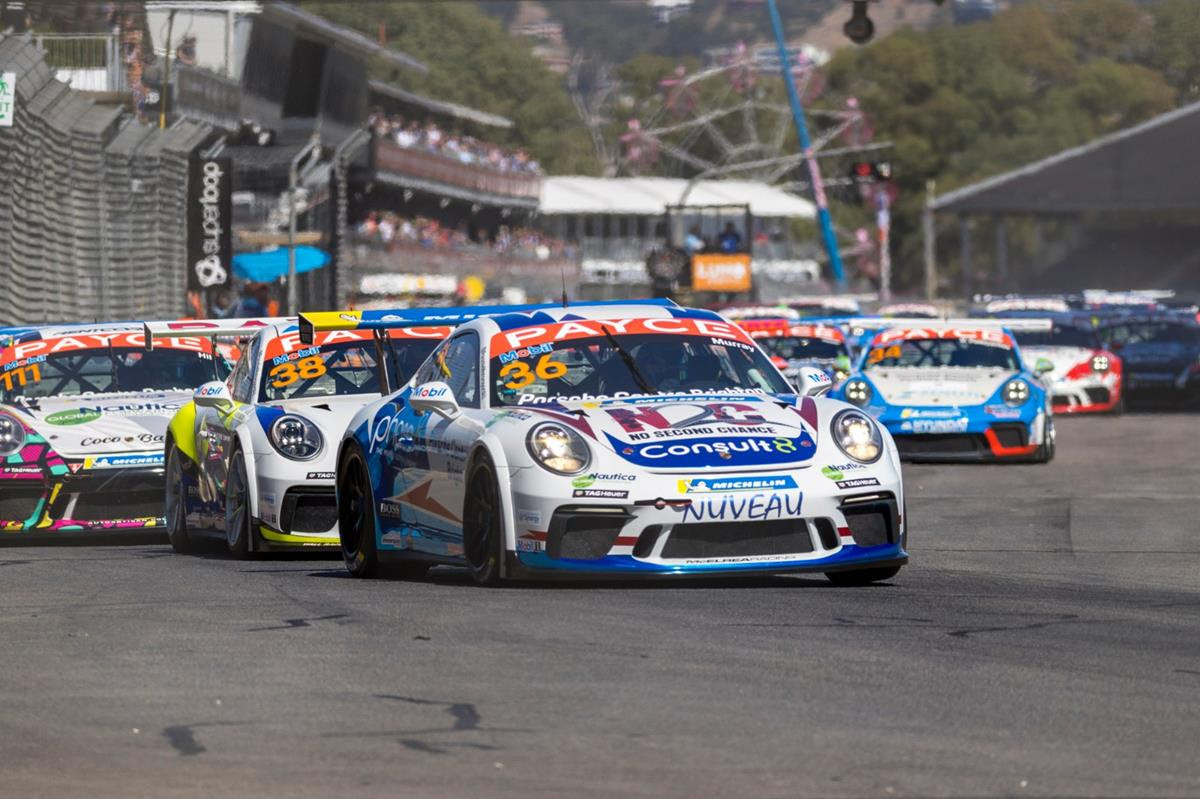 Cooper Murray leading the field in Adelaide in February

Carrera Cup racer Cooper Murray is banking time on the simulator during the enforced break from racing by competing in two separate Porsche competitions.

The teenager is set to race in the Porsche Payce and Michelin Virtual Cup starting tonight, and last week campaigned in the Porsche Carrera Cup Asia Virtual Edition last week.

Murray received a call up to the Asian series as a stand in for the competition with the Bergwerk Motorsport.

He was recommended for the drive by Leigh Geyer, chief engineer at McElrea Racing.

“(The team) got in contact with me after talking to Leigh. It was all started from there and it was just a matter of if I could do both series,” told Speedcafe.com.

“We just had to wait till they got sorted and then we had to see with the Australian eseries and the Carrera Cup Asia eseries to ensure it didn’t clash, so I was able to compete in both.”

Murray banked a sixth place finish in the opening race of the Asian competition at the Shanghai circuit, followed by a third in the second race at the same venue.

He sits fourth in that competition with the first of four events complete.

“We had definitely a strong pace; top three pace, even top two pace,” he explained.

“In race one we started fourth and got taken out twice, which is a bit unfortunate.

“There was a lot of lag in the service, that didn’t obviously help, but we still managed to finish six in the first race, which was good points.

While the Asian competition runs on the Assetto Corsa platform, the Australian series will use iRacing.

The difference in software brings with it differences in the physics models used, leading to a different feel in each.

“I actually never used Assetto Corsa before I got the call out to do Carrera Cup Asia, so as soon as I got that call up I downloaded it straight away and some did some laps.

“There’s a lot of difference between the two, how the cars handle and the graphics and the tracks and everything. I adapted fairly quickly to it.

“Adapting from one to the other is quite simple,” he added.

“It’s probably takes a lap or two to get into it and then all the muscle memory comes back and different driver skill that you need to for that game.

Murray’s personal sim setup consists of a Fanatec wheelbase with Simworx pedals and chassis, hooked up to a triple screen computer.

“I’ve always had my own simulator at home for about the last six years,” Murray said.

“My focus purely is on Carrera Cup Australia, this year for that championship,” he asserted.

“Carrera Cup Asia has got a very competitive championship, so if anything does arise in the future, we’ll be sure to look at it, but for now, our main focus is on this current Carrera Cup Australia championship with McElrea racing.”