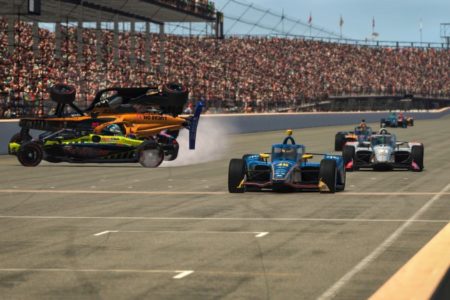 Scott McLaughlin has won the Indianapolis IndyCar iRace after four drivers ahead of him took themselves out in the run from the last corner to the finish line.

McLaren SP team-mates Oliver Askew and Pato O’Ward were duelling for the lead as the final lap of the six-race IndyCar iRacing Challenge began, but Marcus Ericsson got a run on both down the back straight of the speedway.

The Chip Ganassi driver snuck underneath Askew and O’Ward into Turn 3 only to be tagged by the latter at Turn 4 and spin into the wall.

Askew drove past that incident but had Santino Ferrucci (Dale Coyne Racing w/ Vasser-Sullivan) directly behind him for the run to the row of bricks and when Ferrucci jinked left, he hit Car #7.

McLaughlin was able to ease his way around the unfolding carnage and take the Pirtek Team Penske entry to victory just ahead of Conor Daly (Carlin).

So close to the finish were Ferrucci and Askew, who were still crashing across the line, that they were classified within half a second of Daly in third and fourth respectively.

McLaughlin had started from pole and, while he found himself in eighth position when the race restarted for the last time with nine laps of 70 remaining, was soon vying for the lead with the McLaren SP entries which filled the top three at the time.

“Thanks to Pirtek for the support, proud to do it for them and Team Penske! Thanks to Indycar and (Jay Frye, IndyCar President) for allowing me to have some fun and race some cars!”

That was wild! Did my best “Bradbury” and won the Indy 175! Thanks to Pirtek for the support, proud to do it for them and Team Penske! Thanks to Indycar and @JayRFrye for allowing me to have some fun and race some cars! pic.twitter.com/SzZJlyH2Tz

CLICK HERE for McLaughlin’s reaction as he took the finish

McLaughlin’s team-mate Will Power, who spent time in the lead, got home in 14th, and James Davison was 19th in the Byrd/Belardi entry.

The last half lap. And a race’s worth of action packed in to it. #INDYCAR // #INDYCARChallenge // @IMS pic.twitter.com/unKYCOiYL0