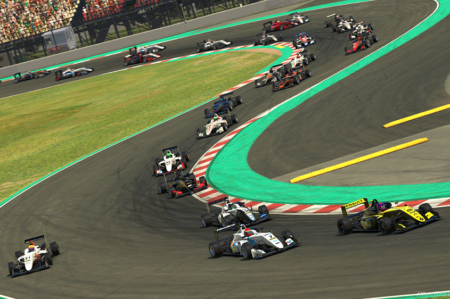 Round 5 of the ARG eSport Cup at Barcelona-Catalunya

Renault junior Oscar Piastri has claimed a dominant race win in his cameo appearance in the ARG eSport Cup at Barcelona-Catalunya.

Piastri prevailed in the first of two races of Round 5, contested in Formula 3 cars, in lights-to-flag fashion while Nathan Herne got home in second position at more than three seconds adrift.

Pole-sitter Luca Giacomin was a factor in the early stages until he spun at the first corner and dropped back.

Instead, the top five at the chequered flag was rounded out by Dylan O’Keeffe, Thomas Randle, and Jay Hanson.

Current series leader Harley Haber was only 14th after a coming-together with former series leader Ash Sutton put him in the barriers at Turn 2.

However, that helped set up Haber’s victory in the second, reverse-grid affair.

The V8 Touring Cars driver charged to the front of the field on the first lap and held the spot for the balance of the race, while Randle and Piastri came from further back to make up the podium.

George Miedecke and Brett Holdsworth rounded out the top five, with Herne rising to 12th.

Round 6 takes place at Phillip Island on May 7, with coverage streamed on Speedcafe.com from 20:00 AEST.