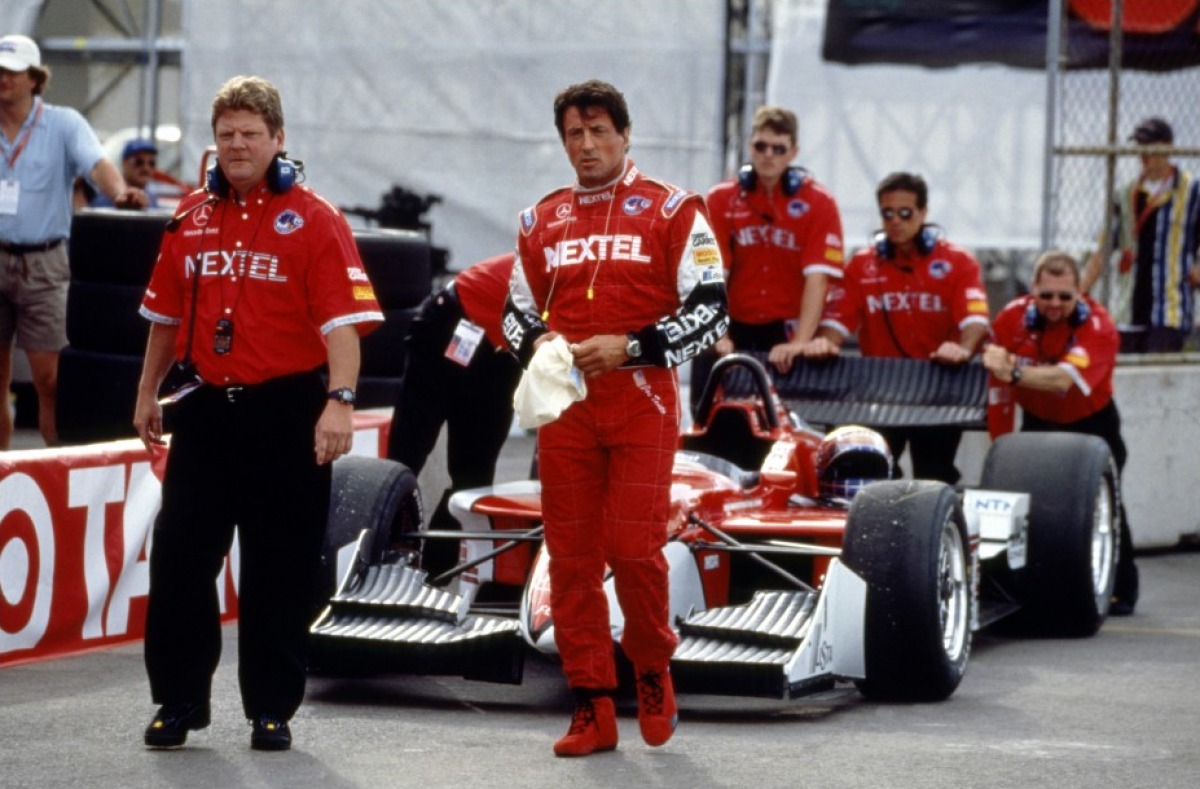 Speedcafe.com continues to attack Coronavirus isolation this week by running a series of extracts from the autobiography of the site’s founder, Brett ‘Crusher’ Murray.

The remaining 100 copies of the book are being sold at a discount of $40 (inc Express Post) with 100% of proceeds going to Speedcafe.com’s charity, Motor Racing Ministries. to buy your copy CLICK HERE.

In this chapter ‘Crusher’ looks at the time he was called personally by Sylvester Stallone and offered a role in the movie Driven – What happened next? – Read on!

“Everyone wants to be in a movie.”

And with that conversation at the Chicagoland Speedway in 2000, I came as close as I ever will to Hollywood fame.

Sylvester Stallone was on the ground getting a feel for Champ Car racing which would be the background of his next movie, Driven, and I had been contacted to look after the media and communications for Bruce McCaw’s PacWest Racing organisation.

Very loosely, the movie was to be about a young driver chasing his first major title and the on-and-off-track battles he has to endure to achieve his dream.

Throughout the remainder of the weekend several people from within the CART ranks kept telling me that Stallone was asking about ‘Crusher’ as if he was seriously scoping me out for a role in the movie.

The feedback became so constant that I thought I was being set-up for one of the best ‘gotchas’ of all-time, but I had obviously overestimated the creative ability of my American counterparts.

Even Trudi (wife), who was now a few months pregnant and hosting PacWest Racing’s Summit hospitality facility, was getting her own enquiries as to whether ‘Crusher’ was about to become a Hollywood star.

We joked our way through the weekend, but on Monday morning back in Indianapolis, in our rented one-bedder, complete with its green couch where Maximilian was conceived, the situation became a little more serious.

“Hi, this is Michelle and I am the casting agent for the movie Driven. Mr Stallone has asked me to give you a call to see when you can do a screen test.”

Man, these Americans are good at a set-up!

“Well, Michelle, if Stallone wants me in his movie, tell him he can f#^*ing ring me himself,” was my reply before I abruptly hung-up.

Holy shit, this dude is for real!

After convincing me he genuinely wanted me to do a screen test for the movie, I accepted the opportunity to look over an outline of the script.

It is also featured my PacWest drivers Mauricio Gugelmin and Mark Blundell who had loaned their car and helmet likenesses to be used by the lead characters.

This came after some support from our major PacWest sponsors Nextel and Motorola.

Basically the story goes that young driver Jimmy Bly (Kip Pardue) had already won five races mid-way through the 2001 Champ Car season, but was being put under constant pressure from his manager-brother Demille (Robert Sean Leonard), who was piling on more and more media and sponsor commitments.

Bly’s success pisses off reigning champion Beau Brandenburg (Tim Schweiger), who decides the only way he can clinch the title is to burn his fiancee Sophia Simone (Estella Warren).

As you would expect, Brandenburg returns to form and Bly’s paraplegic team owner Carl Henry (Burt Reynolds) gets frustrated by his young driver’s increased error rate.

Henry sees some parallels between Bly and his former champion driver Joe Tanto (Sylvester Stallone), who he convinces to come out of retirement to replace Bly’s teammate Memo Moreno (Cristian de la Fluente) and help his young ace.

Part of his comeback preparation involves Joe going into a strange humming trance while driving the car and a ritual where Team Manager ‘Crusher’ places some coins out on the track which Joe has to manoeuvre his car over and pick up with his rear tyres. Seriously!

To be honest I actually thought this was based on a true story when I read the script. But it gets better!

Jimmy starts to knock off Brandenburg’s ex (Sophia), which causes him even more distractions and ultimately a big crash in Japan.

The highlight of the movie comes at a lavish party in Chicago where the cars are being unveiled for the following season.

At this gig Brandenburg gets Sophia back by getting her to put her engagement ring back on, and she has to tell Jimmy that it’s now “all off”.

Jimmy gets the shits, jumps into one of the prototypes, starts it up (we are still all wondering how he managed that) and goes ripping through the city – without a helmet.

Joe, being the good old teammate that he is, jumps in a second car and chases him through town.

Carl decides to give Joe the arse for the next round and reinstates Memo. Joe calls the shots from pitlane with ‘Crusher’.

In the next race, it’s another close one with Bly and Brandenburg fighting it out for the win.

Bly needs the victory to clinch the championship, and Moreno is instructed to block for him, and keep out of his way.

Cathy gets on the radio (as all good wives should) and convinces Memo to go for the win and, as a result, he collides with Bly in a horrific crash that sends him flying through the air and crashing into a lake.

Bly does a U-turn, drives his car to the lake and dives in after him. Brandenburg does the same and the two of them rescue Memo just as a tree that caught fire in the crash collapses onto the burning car which explodes after fuel on top of the water ignites.

Carl is so pissed by Bly’s “humane” acts that he decides to replace him for the following season with Brandenburg, who is now managed by Bly’s brother (You still with me here?).

With Memo now in hospital, Tanto is back in the car for the final race of the year.

Bly has a foot injury after his heroic efforts in rescuing Moreno, but is cleared to race by Carl after passing a bizarre strength test – I am still not sure where the series’ medical staff were at this point.

In the final race of the year in Detroit, Tanto takes the lead after avoiding “another” accident, but has damaged his suspension after a triple pirouette through the air and is not in a position to challenge for the win.

Bly and Brandenburg pass him with a lap to go and fight it out, with the youngster taking his first title by inches, but not before we experience a slow motion sequence when Bly is inspired by some words of wisdom he recalls from Tanto.

The perfect ending comes when Tanto spins across the line in third place to create the perfect “podium” finish and a movie-ending champagne spray from the trio!

While the script outline should have been enough to scare anyone away, it was actually a requirement to be on set in Canada for up to six weeks that forced me to turn down the opportunity.

The truth was that I was already living my dream because McCaw had head-hunted me from Australia, giving me a shot to prove myself on the US stage and I owed it to him to give it everything I had.

My year with PacWest was one of the most memorable and rewarding of my career and created some tremendous friendships which last until this day, including McCaw to whom I owe so much and who still remains just a phone call away.

While I passed up Stallone’s offer there was no way that I was not going to milk every last drop out of this new relationship.

The biggest bonus came later that year when I convinced director Renny Harlin to come to Australia to shoot and include some of the sights and sounds of the Gold Coast race in the movie.

Harlin, who is from Finland and was married to Geena Davis for a few years, had previous runs on the board with movies including A Nightmare On Elm Street 4: The Dream Master and Cliffhanger, where he first collaborated with Stallone.

Harlin was a good guy and did my personal stakes no harm when, during a Surfers Paradise media conference, he told a throng of reporters that the only reason he decided to include the end-of-season Gold Coast race in the movie was because I had convinced him to make the investment in coming to one of the “most beautiful places on the planet”.

After I “rejected” him, Stallone hired a regular actor by the name of Brent Briscoe (no relation to Ryan), who started as an apprentice at the Burt Reynolds Jupiter Theatre in the mid-’80s.

He spent years on the road in theatrical theatre before moving to LA permanently to try his luck in the big time. Ha, theatrical theatre is not much different to the PR business really! Briscoe was Lou in Sam Raimi’s A Simple Mind in 1998 and a year later was in The Green Mile.

You just have to hope he got paid plenty upfront for his role as “Crusher” in Driven, because the movie reportedly lost $40 million at the box office. Briscoe, also a writer, resides in San Fernando Valley in California with his wife Angela.

Like the real “Crusher” I bet he wishes he had stuck to writing, at least in the year 2000.

Stallone had originally wanted to build Driven around Formula 1, but all the limitations and guidelines from F1 boss Bernie Ecclestone forced him to look elsewhere. As with most of his deals, it is safe to say that Bernie (and Formula 1) had the last laugh.

I think Bernie probably had the last laugh, but never forget that “Crusher” helped rookie Jimmy Bly to his first championship.

If you want proof – go to the credits!

The book does have a more serious side and in this chapter ‘Crusher’ looks at some of the lowest days that motorsport has dished out.