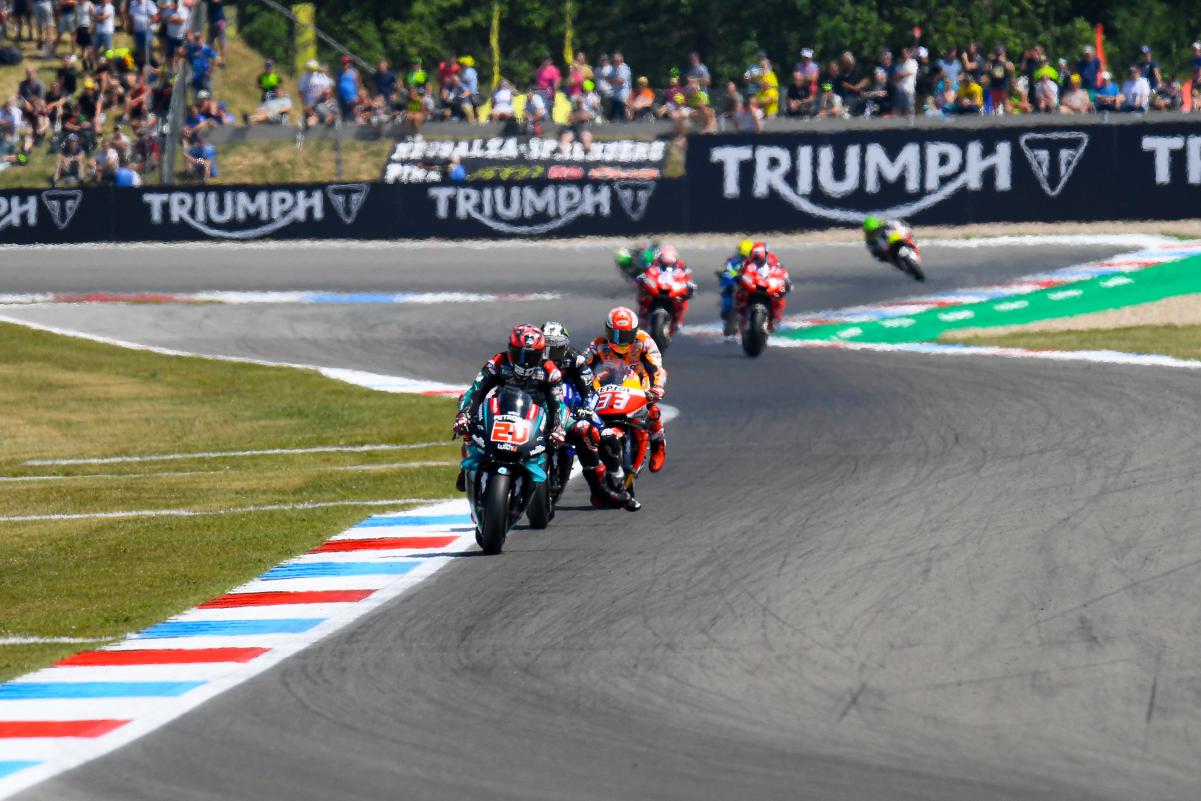 The German, Dutch, and Finnish rounds of the 2020 MotoGP season have all been cancelled due to the COVID-19 pandemic.

That trio of events had been the first three yet to officially be affected by coronavirus, and the last three before the original summer break.

Some disruption was inevitable given the ongoing bans on mass gatherings in Germany and The Netherlands, and the need to homologate Finland’s KymiRing for its debut on the MotoGP calendar.

The cancellation of the Dutch TT is especially remarkable given that Assen has hosted a round every year since the inception of the world championship, a point made by Dorna Sports CEO Carmelo Ezpeleta.

“It is with great sadness that we announce the cancellation of these three important Grands Prix on the MotoGP calendar,” said Ezpeleta.

“The German GP is raced on a truly unique track with an incredible history, and the KymiRing is an exciting new venue set to welcome Grand Prix motorcycle racing back to Finland for the first time since 1982.

“And the iconic TT Circuit Assen had the unique honour of being the only venue to have held a round of the motorcycle racing Grand Prix World Championship every year, uninterrupted, since the Championship began in 1949.

“On behalf of Dorna I would like to thank all the fans for their understanding and patience as we wait for the situation to improve.

“We very much look forward to returning to the Sachsenring and the TT Circuit Assen in 2021, and eagerly await the Grand Prix debut of the new KymiRing next season.”

A subsequent update issued by Dorna Sports on Ezpeleta’s behalf reiterated the plan to start the season in late-July and hold most, if not all, rounds in Europe.

However, his latest comments also provide more clarity around Dorna’s thinking regarding the calendar, with no designs on leaving Europe until after November.

The revelation has implications for the Australian Motorcycle Grand Prix, which was scheduled for October 23-25, as well as the other three Asia-Pacific flyaways, and the rounds in the Americas which had already been rescheduled from April to November.

“Our idea right now is to start at the end of July. Where and when are still to be decided,” stated Ezpeleta.

“We’re sure our initial program is to start in Europe and race from the end of July until November and see what’s happening, and if the non-European races will be possible after November.

“In the worst case, if it’s not possible to travel outside of Europe, we’ll at least keep a Championship of least 10 to 12 races between the end of July and the end of November.”

Germany has originally been scheduled for June 19-21, The Netherlands for June 26-28, and Finland for July 10-12, followed by the Czech round at Brno on August 7-9 which now provisionally holds season-opener status by default.

Current dates, however, are guidelines at best at the present time, especially considering some circuits could end up hosting multiple races during the season.

“We are considering that,” confirmed Ezpeleta of the prospect of repeating some tracks.

Jerez (Spanish Grand Prix), Le Mans (French), Mugello (Italian), and Barcelona-Catalunya (Catalunya) are all listed with date TBD having had their rounds postponed due to the pandemic.

MotoE’s calendar has also been affected by the latest calendar ructions given the electric series was set to race at Assen.

Updates on its season will be “provided as soon as available” according to the announcement issued by Dorna.