Motorsport Australia has offered an extension on licences

Motorsport Australia has offered licence holders an extension of up to six months as the sport current remains in hibernation.

In response, Motorsport Australia has approved changes to the expiration of some licence types.

That sees changes to National and Clubman Licences that expired between January 1 and March 31, and current licenses set to expire until the end of March 2021 (full list below).

There are similar extensions for Junior and Speed licences, with further incentives including a $25 Motorsport Australia estore voucher for annual renewals made prior to June 30.

“We are certainly very keen for motorsport to return, but we are currently in somewhat of a holding pattern as we wait for things to improve,” explained Motorsport Australia President, Andrew Papadopoulos.

“As such, over recent weeks, our administration has been working out the best solution for our licence holders, in consultation with State Councils and clubs, and have determined that those with national and clubman licences will automatically have their licences extended as outlined.

“We have also committed to a price freeze on all speed and junior licences.

“The changes to the expiration dates also allow us to move National and Clubman licences on to a more regular renewal cycle, meaning that renewals can be processed every quarter, instead of every month as is the case now.

“This will ensure our membership team can perform as efficiently as possible, making the annual renewal of a licence as simple as possible for members and reducing any delays.”

Speaking with Speedcafe.com, Motorsport Australia CEO Eugene Arocca stated the decision was made after receiving feedback from members.

“It’s something that we’ve been actually talking to our members about over the last four weeks,” he said.

“We haven’t had any requests for refunds. What we’ve had is people saying, ‘Why should I renew as my license becomes due right now, when there’s no motorsport activity?’

“We’re certainly understanding that it doesn’t make sense for someone to renew their license today, when there’s no motorsport activity, and so we’ve come up with what we believe to be a fair way of allowing our members to renew, and also get the benefit of an extended period of license activity.

“It’s a bit of a multi-level approach, which includes both those that have renewed and those that are about to renew, and those that will renew in the next six months,” Arocca added.

“We’re keeping it fairly fluid. We don’t believe that there’s a straight one-month or two-month delay before we get back.

“We want to keep it fairly vibrant, and fluid, and able to respond to things as they unfold, but I think our members will be generally reasonably happy with the outcome we’ve come up with.” 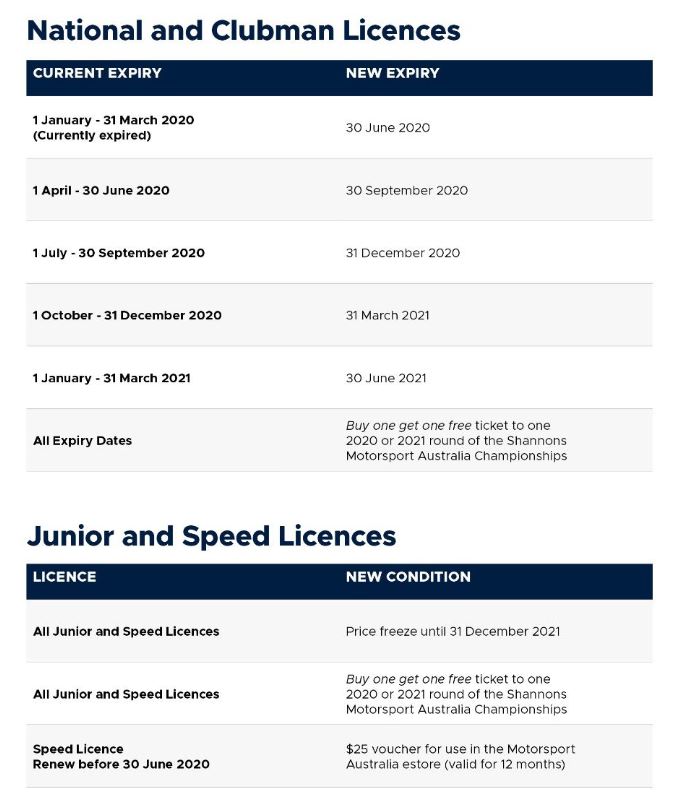