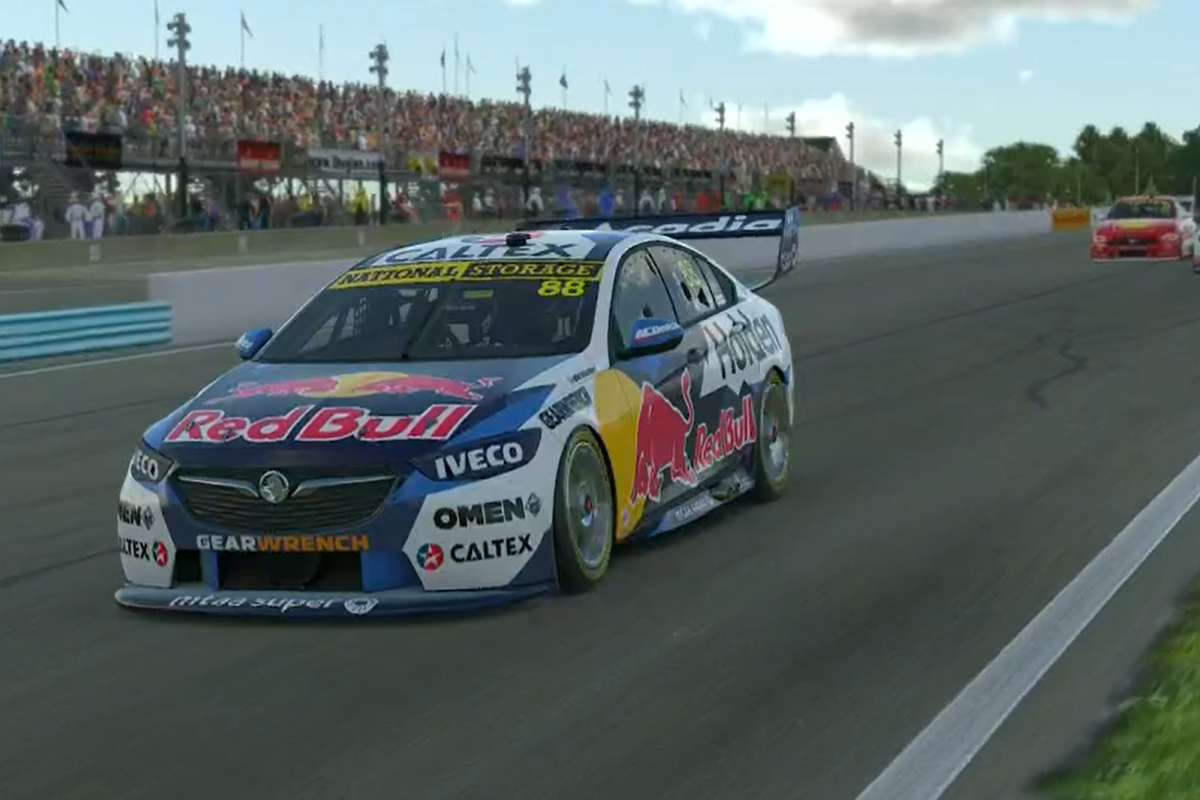 Anton De Pasquale and Jamie Whincup took top honours in the final two races of Round 4 in the BP Supercars All Stars Eseries at Watkins Glen Internationa.

De Pasquale made the most of a slow getaway by pole-sitter Shane van Gisbergen to take an early race lead ahead of Scott McLaughlin.

The Penrite Racing driver was largely unchallenged in the 14-lap affair to claim a comfortable win over the Kiwi duo.

The final race of the night was controlled by Whincup, who took an early race lead and held off challenges from wildcards Angelo Mouzouris and Alexander Rossi.

It’s the first time Whincup has won an Eseries race.

It was a slow start for van Gisbergen who bogged down off the line and was swamped into Turn 1. While he plummeted down the order, De Pasquale inherited the lead.

McLaughlin moved into second while Lee Holdsworth went to third and Bryce Fullwood to fourth.

Angelo Mouzouris found himself facing the wrong way after contact with Zane Goddard at the entry to pit lane on Lap 4.

After his slow start, van Gisbergen soon got through Kostecki and Fullwood.

The undercut didn’t net a position increase for McLaughlin, but the margin was brought down several car lengths.

Once the pit stop sequence was completed it was De Pasquale who led McLaughlin. In third was van Gisbergen while Holdsworth went back to where he started in fourth.

Fullwood was a lonely fifth, however, it was a frantic battle for sixth rearwards. Mostert and Kostecki fought hard for the place.

At the head of the field, De Pasquale couldn’t be caught by McLaughlin. The podium was completed by van Gisbergen with Holdsworth fourth and Fullwood fifth.

Mostert managed to hold off Kostecki while Nick Percat climbed to eighth. Andre Heimgartner and Cameron Waters completed the top 10 after a frenetic fight.

Gary Jacobson, Fabian Coulthard, and Scott Pye were all just shy of the top 10. Meanwhile, Marcos Ambrose was 14th and the first of the wildcard entries.

Alexander Rossi wasn’t far behind in 16th just behind Todd Hazelwood. Joey Logano was 23rd while Angelo Mouzouris was 27th.

Jamie Whincup managed to make the most of the opening lap chaos to surge from the back end of the top 10 to lead at the end of Lap 1.

The Red Bull Holden Racing Team driver managed to keep out of trouble and fought off a challenger from Dunlop Super2 Series rookie Angelo Mouzouris and fellow wildcard Alexander Rossi.

The Matt Stone Racing driver went wide and half spun in the Turn 1 run-off. Moments later and Will Davison speared into the outside wall.

Rick Kelly was another victim early on as he clobbered the wall through the esses.

Through all the carnage, Whincup ended the first lap in the lead over Mouzouris.

Race 13 winner De Pasquale was 23rd at the end of Lap 1 while McLaughlin was the biggest benefactor to move up to 15th from 28th on the grid.

Whincup dropped out of the lead on Lap 6 and fell to eighth after completing his compulsory pit stop. That gave Mouzouris the lead.

McLaughlin was making headway and cracked the top 10 not long before completing his pit stop.

Chaz Mostert was in trouble on lap 9 after a trip through the grass at the Bus Stop chicane. He rejoined and spun.

Mouzouris pitted on Lap 9 and returned to the race behind McLaughlin. Whincup was duly put back into the lead. The biggest surprise was Rossi who made an early pit stop and got a big undercut to be second overall.

Ambrose was third but was soon usurped by Water and McLaughlin. The young duo began to battle, ultimately, it was the Kiwi who claimed the spot.

The final stanza of the race saw second placed Rossi close the margin to Whincup. McLaughlin was a distant third with Waters fourth and van Gisbergen fifth.

In the end, Whincup claimed the win despite a late charge from Rossi. McLaughlin was third with van Gisbergen fourth, Waters fifth, Ambrose, Jones, Winterbottom, Percat, and Fullwood the top 10.

Joey Logano was 21st while Mouzouris eventually faded to 24th.

The BP Supercars All Stars Eseries continues with Round 5 on May 6 with races at Spa-Francorchamps and Nurburgring.

BP Supercars All Stars Eseries Standings, After Round 5 (Provisional)